France’s Senate has approved a bill to restore Paris’ iconic Notre Dame cathedral, but stipulated that it must be restored to the state it was in before it was gutted by fire.

The bill had already passed France’s lower house of Parliament, but the Senate added a clause that the cathedral must be restored to its original Gothic glory, ending weeks of speculation as to whether the landmark could get a modernist re-imagining.

The rebuilding of the cathedral – which had its spire and much of its roof damaged by fire last month – has been the subject of intense debate. Suggestions tabled by architects and designers included replacing the spire with a glass pyramid or a towering beam of light, a solar-powered urban garden, or even an Islamic minaret, though the latter suggestion may have been an elaborate trolling attempt.

French President Emmanuel Macron seemed open to the idea of putting a modern twist on the 800-year-old cathedral, calling for “an inventive reconstruction.” Prime Minister Edouard Philippe also announced an international competition to solicit ideas for the reconstruction, saying a call for submissions would “settle the question” of whether the original spire should be reconstructed as it was, or replaced with something “adapted to the techniques and the challenges of our era.” 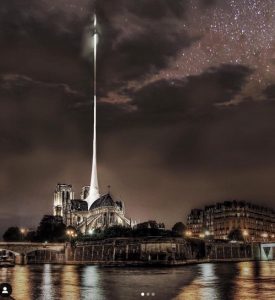 The Senate’s bill now seems to have put paid to any modernist flights of fancy, requiring that the structure be rebuilt in its “last known visual state.” The decision will likely please a majority of the French public, 54 percent of whom want the cathedral restored without any modern “architectural gestures,” according to a poll taken last month.

The bill will not yet pass into law, as the lower house will have to agree on some changes made by the Senate on Monday, regarding tax breaks for donors to the reconstruction and a relaxation of planning and heritage laws to facilitate a speedy job.

Macron has pushed for the project to be finished in five years, a pledge criticized by many in the Senate.

‘Where is the Line Between Global Business & Attempts to Control Society?’ Putin asks Davos as He Calls Out Power of Big Tech 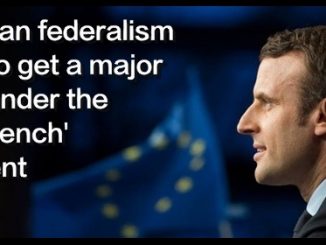 Globalist French President Gets Down to Work Empowering EU