ER Editor: Around half of Europe’s municipalities are to be found in France. The short article below puts this figure at around 34,888. (34,965 is the number we googled.) Anyone running for presidential office in France needs the support of 500 of them, a fixed number. It likely means that Macron’s cronies have been busily soliciting the mayoral class for their support. To obtain the support of a mere 661 out of 34,888, and then to make a big deal of it in the media, shows how worried they’ve been and how little support he really has.

More than 34,288 mayors have not called for the re-election of Emmanuel Macron

All the media are highlighting the 600 mayors who have signed a tribune calling for a second term for Emmanuel Macron.

These include Christophe Béchu, mayor of Angers, Caroline Cayeux, mayor of Beauvais, Christian Estrosi, mayor of Nice, Hubert Falco, mayor of Toulon, and Edouard Philippe, mayor of Le Havre. The re-election of Emmanuel Macron as President of the Republic would make all these people happy. 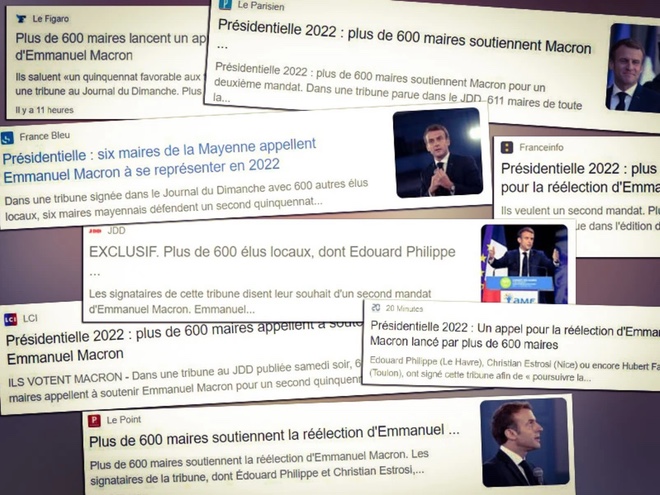 All the mainstream media headline what seems to be huge support for the president of the Republic – Le Figaro, LCI, Franceinfo, France bleu, Le Point, Le Parisien, BFMTV, or the JDD, they are all in unison for this event that suggests an incredible breakthrough for the throne of France. Except that… this beautiful country of France has no less than 34,888 mayors. A figure put forward in 2020 by Maire info, which analysed the national directory of elected officials.

The communications stunt of the signatories for a simple validation of 500 sponsorships in order to be eligible for the presidency allows us to make this simple calculation: of the 34,888 mayors, 34,288 have not signed the tribune hoping for a second five-year term of Macron. And for good reason, it is difficult to sign in support of a president who has bludgeoned/embarrassed the Gilets Jaunes, confined the population, forced vaccination on them, pushed young people to suicide without providing psychological help worthy of the name, fired the nursing staff, made students homeless, forced the sick to be tested in order to enter a hospital, using all the lies in order to make the French population bend to covid… The list of this government’s misdeeds is certainly longer than the 600+ mayors lost on a tribune published in the Journal du Dimanche.

The good news for Macron is that he has his signatories to be able to run again; apart from that, the only advantage of this forum is that the people can already consult the list of mayors who should not be re-elected.

13 Comments on More Than 34,288 French Mayors Have NOT Called For The Re-election of Macron