Go Europe!!  Can we perhaps surmise that the NWO has their hands full in Europe?  First Britain had the gall to demand their sovereignty via a true and honest vote by the people.  And now perhaps all of Europe will insist they not be poisoned by biotech Monsanto? And remember, Monsanto is one of the several tentacles of the ruling elite’s far reaching and pervasive scheme to control the planet.  People are waking up everywhere.  I have hope.  (CG)

The European Commission failed for a third time last week to secure the support of a majority of EU governments for an extension of glyphosate, the main ingredient in Monsanto’s Roundup and other herbicides. 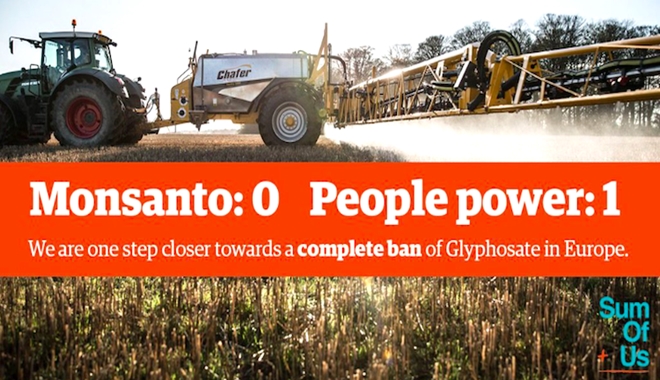 Global watchdog group Sum Of Us has collected hundreds of thousands of signatures from concerned citizens seeking a ban on glyphosate in Europe.

EU sources told Reuters that France and Malta voted against the re-approval and seven countries, including Germany, Italy and Austria, abstained.

Objection to the widely used pesticide is based on the World Health Organization’s International Agency for Research on Cancer’s (IARC) March 2015 assessment that “probably” causes cancer in humans.

Due to the impasse, the European Commission will now have the final say on whether or not the controversial weedkiller remains on Europe’s shelves. Commissioners are meeting in Brussels today to discuss glyphosate’s fate in Europe.

The clock is ticking as the EU’s current approval of glyphosate is set to expire in three days. If the executives do not extend the license by June 30, manufacturers have six months to phase out glyphosate products.

Media reports indicate that the European Commission will likely settle on a “technical extension” of glyphosate for 12-18 months, an “11th hour” compromise that the commission had already proposed in early June to buy time for yet another study assessing whether or not glyphosate causes cancer.

European opinion is sharply divided on whether or not glyphosate causes cancer or if it’s an environmental risk. Monsanto has consistently maintained the safety of its blockbuster product. Reuters reported that the agritech giant has not ruled out legal appeal if the license is not extended. Jonas Oxgaard, senior analyst at investment bank Bernstein, told the publication that Monsanto could lose earnings of up to $100 million if the EU were to halt glyphosate sales.

But the fact that the commission originally proposed to extend glyphosate for another 15 years but has now whittled it down to a temporary approval highlights the chemical’s uncertain fate on the continent.

SumOfUs, a global consumer watchdog, is celebrating the latest failed vote. “We’re one step away from a glyphosate-free EU,” the group writes in an online petition urging member states to “deal the final blow and reject any extension of the glyphosate license.”

Greenpeace has also called on the European Commission to prepare a glyphosate exit plan.

“The Commission is about to give glyphosate an unreasonable grace period, which will continue to leave people and nature exposed to the controversial weedkiller,” Greenpeace EU food policy director Franziska Achterberg said. “It should use this time to draw up a glyphosate exit plan. Glyphosate is the most widely used herbicide in Europe and has been linked to serious health concerns and loss of wildlife. It’s time for Europe to plan for a glyphosate-free future.”

Commenting on the continued deadlock over glyphosate in Brussels, Green Party MEP Bart Staes said, “If the UK referendum has made one thing clear, it is that the EU needs to finally start listening to its citizens again.”

“The Commission must now back down and revoke the approval for glyphosate. Forcing through the authorization would raise major democratic concerns about the EU’s decision-making process. The process of phasing out glyphosate and other toxic herbicides and pesticides from agriculture must begin now, and this means reorienting the EU’s Common Agricultural Policy towards a more sustainable agricultural model and a Common Food Policy.”

Other works by Lorraine Chow 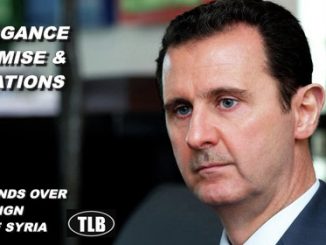 EU’s Syria Plan B: Assad stays and Brussels pays for it – Times 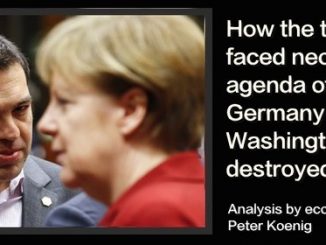 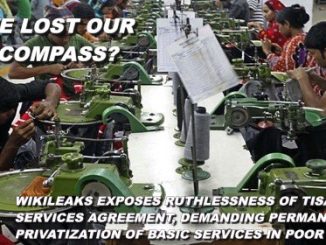