No matter how hard I try to dig German Chancellor Angela Merkel’s political grave, she proves more adept at staying alive than a cockroach in a woodpile. And the recent fight amongst European Union members over “Coronabonds” has proven yet another escape path for her to avoid political termination.

Thanks to Merkel holding the line on debt mutualization (coronabonds) and EU fiscal integration (ER: i.e. that she is against both of them), which is very unpopular in Germany, her Christian Democratic Union (CDU) is now polling at levels it hasn’t enjoyed since before the last general election in 2017.

According to Europe Elects, the latest polling out of Germany has the CDU commanding around 35-37% of German voters. This is a party that was in shambles not two months ago after Merkel heir apparent Annagret Kramp-Karrenbauer stepped down as CDU leader, prompting a new leadership vote, which, conveniently for Merkel, has now been postponed indefinitely thanks to the COVID-19 crisis.

Some of that is the normal “rally around the current leader” that occurs during any crisis. President Trump’s numbers in the U.S. have been strong despite the twin crises here. Even marginal leaders like Prime Minister Giuseppe Conte in Italy have seen their numbers rise.

But a 15-point bump for Merkel is tremendous, and it only happens in conjunction with her refusing to cave on Germany being seen bailing out southern Europe. It may win her support domestically, but it sets up a disastrous future for the European Union.

As COVID-19 rages across Europe, the two major factions within the EU have been fighting a desperate battle for its future, with the issue of debt mutualization being the fulcrum. Now, I believe wholly that the use of lock downs and draconian measures to fight the disease have been more political than practical. Using a public health care crisis to advance a political agenda is the height of cynicism and megalomania.

On the one side we have the Euro-integrationists, led by French President Emmanuel Macron. On the other are the fiscal conservatives led by Merkel, who has given way to Dutch Prime Minister Mark Rutte to be the point man for Macron’s derision.

Trapped in the middle is the real human tragedy in northern Italy where thousands of people have died from the toxic mix of a lack of medical infrastructure, high concentration of high-risk people and lack of knowledge of how to fight the disease.

Worse than that, the government in Italy was put together to spearhead this fight for Eurobonds since Conte was kept in power to ensure Lega’s Matteo Salvini couldn’t, and fight Macron and Merkel by threatening to leave the euro-zone.

Whether you believe the EU’s response or, more accurately, lack thereof, to Italy’s plight was motivated by malice or incompetence, the result is the same. Thousands of Italians died, which weakened already weak bonds between Italy and the rest of the EU technocracy.

As I said in an article back on March 14th:

So in the midst of this mess comes COVID-19 and the uncoordinated and inept response to it from the political center of Europe to date. Only now are they coming to the conclusion they need to restrict travel, after sitting on their hands for a few weeks while Italians died by the hundreds.

And do you think that’s engendering waves of love and affection among Italians towards Germans?

If you do then you don’t know Italians… at all.

And this is your signal that this is the beginning of the real crisis. Because while COVID-19 may have been the catalyst for the breakdown of capital markets, capital markets were simply waiting for that spark to occur.

Honestly, I wasn’t harsh enough in my assessment of what was happening back then, but it was clear that this crisis was being used to push forward EU integrationist plans of Macron and ECB President Christine Lagarde trying to strongarm the Germans and the Dutch into their position.

By the meeting on March 26th, that plan failed. Rutte, Merkel, Austrian Chancellor Sebastian Kurz and Norway all held their ground, and the meeting would have ended in a fistfight had it not been held using social distancing rules via teleconference.

That meeting set up last week’s, which saw Italy cave to German and Dutch intransigence. Macron and Lagarde lost, securing just $500 billion in new loans but no ECB bond issuance. And the issue now is whether Conte will partake of the program or not.

His failure to act as Macron’s Agent of Shame to secure the EU’s future now puts the whole European project in jeopardy because Conte’s government is in serious trouble in Italy. Moreover, this failure was likely unexpected because now even the hardest-core EU integrationists in Italy’s government are wondering why they are part of the EU.

Meanwhile, the polls in Italy haven’t really budged, with Salvini’s Lega holding onto around 30% of the electorate with the Brothers of Italy holding onto recent gains in the mid-teens. 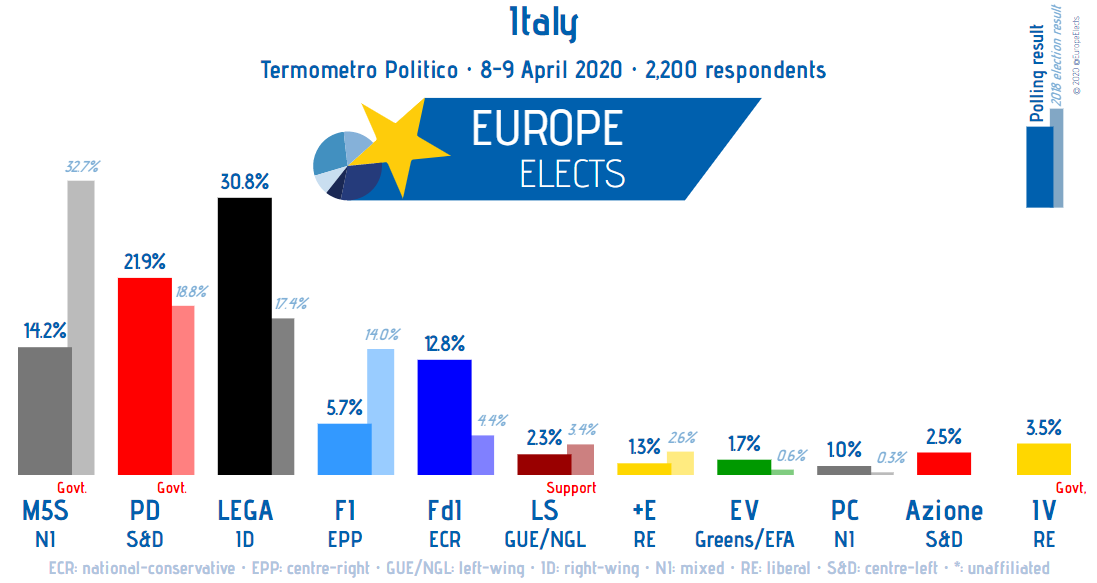 Moreover, now the question of EU membership in Italy is a coin flip. Two different polls (here and here) have it well within the margin of error.

Lastly, and most importantly, Conte’s coalition government is split on whether to avail itself of the newly-approved loans. Reuters reported that the divisions within the Italian coalition are rising and portend a split. In a show of political spine not seen in over a year, senior partner Five Star Movement (M5S) is opposed while the Eurocentric Democrats are all for it since, as of right now, there are no strings attached to the money.

Conte will have to settle the dispute before a video conference among European leaders on April 23, when Italy will be expected to make its position clear.

He tried to defuse the quarrel on Wednesday, warning in a Facebook post that the ESM (ER: European Stability Mechanism) “risks dividing the whole of Italy,” and adding that more information was needed on the terms of any credit lines before a final decision could be taken.

Until these details are clear, discussing whether an ESM loan is in Italy’s interests is “a merely abstract and schematic debate,” Conte said.

But we all know there will be strings in the end. If you doubt that assertion, I suggest you ask Greece how about this. So, Conte has his work cut out for himself. There is real urgency now in the EU to get even token Eurobonds approved before Germany takes over the Presidency of the European Commission in July, where it will set the agenda on the EU’s next seven-year budget.

After years of kicking the can down the road to avoid a messy political upheaval, which is Merkel’s trademark move, nothing has changed in the EU when it comes to fixing its untenable structure. And for this reason, as long as Angela Merkel is on the stage, there will be no European dream.

All Merkel ever does is manipulate events back to the previous status quo. She has no capacity or stomach to face the German voters, nor will she allow anyone else to fully express themselves. Her handling of Brexit negotiations was a fiasco for the EU, thankfully, and her handling of Italy today is just as inept.

With Salvini waiting in the wings, the people ready to revolt over Germany’s handling of the crisis and a weak coalition government put in place by Merkel to hold things together, the probability of Italeave occurring rises daily.

So, while Merkel may have won this latest battle, in the end she may lose the war for the EU. And, in the ultimate irony, the people of Europe may have her to thank for their deliverance from its dysfunction.

Salvini To Cut Migrant Allowance In Half Saving €400 Million