At the end of the French presidential election, it was forecast close to half of people aged under 25 voted for Marine Le Pen of the National Front. In the time since, Macron’s approval ratings have dropped faster than any French President in history – a serious blow to someone not shy in displaying his confidence. The plunge in popularity for the 39-year-old may not be surprising, however.

In June there were allegations of corruption in Macron’s cabinet leading to a number of early ministerial resignations. Among those accused are Macron’s right-hand man during the election campaign, Richard Ferrand, blamed for using “insider information to secure a lucrative property deal for his wife”. Further significant departures were that of his Justice Minister Francois Bayrou and Defence Minister Sylvie Goulard. The signs are far from good.

In Macron’s past working life, he was employed at the Inspectorate General of Finances (IGF), and later as an investment banker for Rothschild and Cie Banque – enriching himself in the process. For example, in 2012 Macron earned almost €3 million advising the multinational Nestle on its $12 billion acquisition of a unit of Pfizer. Both corporations Macron worked for have strong ties to the International Monetary Fund (IMF).

Macron has friends in rather lofty places. The Rothschilds of Germany are one of the world’s richest families – yet scarcely heard of – and have major business connections to the IMF. It is worth recalling that the IMF have been described as “a more cost-effective instrument than the Marines and the CIA if it can do the job”.

The IMF does that job in weaker countries by artificially propping up the highest sectors of society – those greatly responsible for the economic disasters to begin with. It is another arm of American imperialism designed to serve elite power while significantly harming the population.

Macron was employed under, are a considerable force behind financial institutions like this.

Last year Russian President Vladimir Putin banned the Rothschilds’ banking monopolies from Russia, denying them a foothold “under any circumstances”. Putin outlined that, “they do not own the world, and they do not have carte blanche to do whatever they want. If we do not challenge them there will be other issues. We will not be bullied by them”.

Macron himself comes from a banking corporation background. He has targeted low income families with his “flagship manifesto promise” to remove local housing taxes for 80% of households – leading to claims of “disregard for the working-classes”.

Macron described predecessor Francois Hollande’s 75% tax on the country’s wealthiest sectors as “Cuba without the sun”. He has also questioned the 35-hour working week, saying that he wants to “return flexibility” to companies – an Orwellian phrase that means increasing working hours and handing over more power to management.

In the meantime the French President has promised next year to enlarge spending on the armed forces, but to what end one can only imagine. Perhaps he is visualising a possible military intervention abroad, such as the one perpetrated against Libya in 2011 – another cataclysmic Western invasion later swept under the rug. Just months into the job Macron has been quick in attempts to assert his authority. 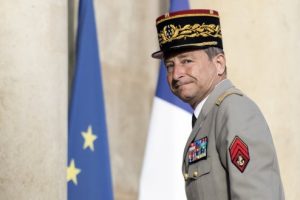 He became embroiled in an ugly dispute with General Pierre de Villiers (pictured), 22 years his senior, and France’s then leading military commander (ER: Macron has promised to cut military spending by 870 million euros for this year). It led to De Villiers quitting and Macron rebuking him at a meeting in front of other high ranking military officers, saying “For me it’s undignified to wash dirty linen in public” – apparently unaware he too was washing “dirty linen” in the public domain.

Macron continued telling the French officers and their families that “I have made commitments, I am your boss… What I like is the sense of duty, the sense of discretion that has taken our army to where it is today”. This is not long after the French military played its role in wrecking Libya, which Macron seems to have forgotten about. There was a “sense of duty” lacking in glossing over this major war crime.

Macron’s record with regard the press and freedom of speech also depicts a concerning trend. Last month he ditched the annual Bastille Day television interview because he felt his thoughts would be “too complex” for journalists. Just five days into Macron’s term, concerns were raised after he handpicked which reporters could travel with him to visit French troops in west Africa.

A month before the election Macron barred Sputnik and RT from having access to him, blaming the outlets for “spreading lies methodically and systematically” while offering no evidence. This discrimination against freedom of the press, and indeed free speech, was backed up a month later with yet further attacks.

With Putin standing nearby, Macron said without providing evidence again that employees of RT and Sputnik are “no longer journalists, they are organs of influence… I will not give an inch on this”. After this unseemly assault on freedom of expression, Macron felt the need to lecture the Russian President on minority rights in Chechnya.

Macron carefully excluded stations like the BBC or CNN from his attacks on “lying propaganda”, despite the Western networks’ questionable history on impartiality. The BBC, for example, had the most pro-war stance of any British channel in the build up to the Iraq invasion, as a Cardiff University study revealed. Undesirable facts such as this are not meant for public consumption. 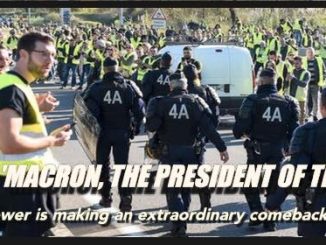 “Macron is the president of the rich”: “Yellow Vest” protesters speak out