ER Editor: Another twofer, this time on Macron making tough-on-Islam promises as an election (the municipals) looms, while his desperately unpopular pension reforms are still in the works and after his sidekick, married man with a family Benjamin Griveaux, resigned for having sent an attractive, twenty-something law student a penis video (yes …) a little more than 2 years ago. Plus, while on the tough-on-Islam campaign trail, he doesn’t seem to see that he’s physically facing a veiled French Muslim woman, who’s violating the law of the land! (pictured) See our second story. Welcome to Macronie.

Zerohedge, in our first article, links to this France24 piece below; it’s not a bad, straight-on MSM presentation of problems in working-class French society where Muslim culture has taken hold, and contains a couple of useful videos. See Macron unveils curbs on foreign imams in France to combat ‘separatism’.

With Emmanuel Macron’s popularity in freefall and his allies taking hits, the French President has yet again attempted to appease France’s growing populist movement – announcing on Tuesday that he would end a program which allowed foreign countries to send imams and other religious teachers in order to crack down on “separatism.”

“The problem is when in the name of a religion, some want to separate themselves from the Republic and therefore not respect its laws,” said Macron, speaking from the eastern French city of Mullhouse, adding that his government would combat “foreign interference” in how Islam is practiced – as well as how its religious institutions are organized within the country, according to France 24.

Of note, France is home to Europe’s largest Muslim community – estimated at around 6 million, or 8% of the population. The country has long sought to assimilate Muslim nationals and residents.

Macron said he plans to end a programme created in 1977 that allowed nine countries to send imams and teachers to France to provide foreign language and culture classes without any supervision from French authorities.

Four majority-Muslim countries – Algeria, Tunisia, Morocco and Turkey – were involved in the programme, which reaches about 80,000 students every year. Around 300 imams were sent to France every year by these countries, and that those who arrived in 2020 would be the last to arrive in such numbers, said Macron. –France 24

Macron’s government has asked the French Muslim Council (CFCM) – which represents Islam in France – to find solutions to train Imams on French soil in order to ensure that they can speak French and do not spread radical Islamist views.

The announcement comes less than a month before municipal elections in France – suggesting that perhaps Macron is simply pandering to angry French citizens by adopting his political opponents’ nationalism.

The measures were part of a much-anticipated intervention less than a month before municipal elections in France. Macron’s speech came at the end of a visit to Mulhouse, home to a large Muslim community that has been the focus of the French government’s campaign against Islamism.

The new rules were intended to counter Islamic extremism in France by giving the government more authority over the schooling of children, the financing of mosques and the training of imams, said Macron. –France 24

“This end to the consular Islam system is extremely important to curb foreign influence and make sure everybody respects the laws of the republic,” said Macron.

“We cannot have Turkey’s laws on France’s ground. No way,” Macron added.

According to the report, Turkey runs a “vast network of mosques inside the country and abroad under the powerful Diyanet, or Directorate of Religious Affairs,” to which President Recep Tayyip Erdogan has provided a significant boost in funding – to the point where critics accused Ankara of using it as a foreign policy tool in order to extend Turkey’s soft power.

In recent years, France has suffered a spate of radical Islamic terror attacks. In November of 2015, Muslim terrorists attacked the Bataclan theater and other sites, killing 130 people in the deadliest attacks since WWII. Most of the attackers were French or Belgian nationals who were indoctrinated into radical Islam while in Turkey before traveling to Iraq and Syria to fight with ISIS.

Macron photographed next to a fully veiled woman

MULHOUSE – On the sidelines of his speech on Islamist “separatism” in Mulhouse, the president was photographed right next to a woman in violation of the law of 2010.

The contrast is striking. Traveling to Mulhouse (Haut-Rhin) to discuss the theme of Islamist “separatism” – Macron’s way of defining ethnic communities – the French leader was photographed in a situation totally out of sync with the substance of his speech.

Indeed, while he was questioned by the press in the middle of a crowd in the middle of the street, the President of the Republic did not seem to notice that a Muslim woman, with her face entirely veiled, stood right next to him, in flagrant violation of the law of 2010 on the wearing of a religious Islamic veil.

It is a disastrous image for a head of state who nevertheless came to Mulhouse in order to reaffirm his will to fight political Islam. Worse still, the President of the Republic was being particularly lax by not acting against an legal offense.

Since 2010, legislation adopted under the mandate of Nicolas Sarkozy prohibits the concealment of a face in public spaces. “No one may, in public space, wear an outfit intended to conceal their face,” Article 1 notes. It is an offense punishable by a second class fine, which may be replaced or supplemented by a citizenship course.

This photo obviously quickly ignited social networks, and triggered the anger of many Internet users. Amine El-Khatmi, president of the Republican Spring, estimated that this image “will overshadow everything else”. 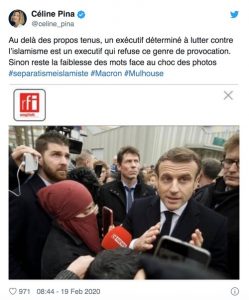