In the video below, Dane Wigington delivers a presentation on geoengineering which took place last September in Redding, California. Wigington maintains the GeoengineeringWatch.org website, and he has gotten together with a team of lawyers to form the Legal Alliance to Stop Geoengineering, or LASG.

On Monday of this week, the LASG filed a “US 60-Day Notice of Legal Action”–basically giving notice to a number of named individuals that they are about to become defendants in a lawsuit aimed at stopping the illegal spraying taking place in our skies.

The suit is expected to be filed in federal court in California within the next 60 days.

A number of California state and local officials are also named, plus there is an additional group of 17 other people who are named as “delinquent regulators.” These include officials with the US Environmental Protection Agency and the California State Water Resources Control Board.

“In this time of disclosure, the citizens of this nation–indeed, of this planet–deserve to know the nature and extent of the aerosol spraying programs (“Programs”) occurring in the skies over California and its waters (both coastal and inland), as well as across this country and beyond its borders,” the Notice states.

The document also issues a “warning” to the individuals named (emphasis included in original):

Pursuant to the Federal Rules of Civil Procedure, all Proposed Defendants including Violators and Delinquent Regulators as hereinafter listed, are directed and notified to search for, preserve and prevent destruction of all potential evidence or information likely to lead to the discovery of evidence, including all records, documents, information and writings, in all forms both physical and electronic and any other media, REGARDLESS OF ANY POLICIES OF RECORD RETENTION AND DESTRUCTION FOR NORMAL BUSINESS-OPERATING FUNCTIONS AND ACTIVITIES.

Potential plaintiffs in the case are also named, all of whom “have been harmed and have interests that have been adversely affected” by the spraying, the document alleges.

“Proposed Plaintiffs presently understand that the Violators are using a variety of base materials for the aerosol releases,” states the Notice.

“Beyond the fictional defense that ‘it’s not happening’ and that the artificial clouds are ‘just persistent contrails’ from commercial aircraft, the actual Programs are releasing nano-particulates of toxic materials, including, but not limited to, aluminum oxide, barium, and strontium, into the atmosphere at high levels in the dubious effort to impact the climate or for other reasons unknown,” it also states.

The pending legal action was announced in a post by Wigington yesterday at GeoengineeringWatch.org. Wigington says the lawsuit has been in the works for more than a year and that public support will be critical in order for the legal team to continue to move forward. You can go here to visit the LASG website, and here to learn about the members of the legal team. One of the team members is California attorney James Grant, who says he believes the upcoming action “will be heavily litigated because the stakes are high.”

“We are doing this for all of us who inhabit this beautiful planet and have a responsibility to protect it now and for the future,” he added.

Wigington says geoengineering programs are “unimaginably massive and destructive,” and that they are taking  place in America  other countries without public consent.

“Those who control the weather, control the people, and in the process, the life support systems of our planet are being systematically torn apart,” he writes.

In one section of the document, entitled “The Violators and Their Misconduct,” the LASG states that in the year 2002, the California Water Quality Control Board made the decision, “without any rationale,” to stop testing for aluminum in California waters.

If you’d like to make a donation to the legal effort, visit the LASG website and click on the “donate” link at the upper right corner of the pate.

Most of us tend to be one-issue people. That is to say that whatever our pet issue is–whether it be the Palestine/Israel conflict, our own government’s support for terrorists in Syria, or the mounting global tensions between NATO and Russia–we tend to stay focused largely on that issue, to the exclusion of much else.

But the spraying of toxic particulate matter in the skies over our heads is an issue that effects every single living creature on this planet. Who is behind it (aside from the issue of what branches of government are carrying it out) and what their ultimate motives are are not completely clear, but in the video above Wigington offers some thoughts on the matter. He also includes quotes from several US elites and their anointed scholars, including one rather disturbing one (disturbing, but not that surprising) from Zbigniew Brezezinski, who opines:

There are aerosol spray clouds in the sky where I live just about every day now, and I’m sure this is true in most other areas of the country. You don’t have to be a “conspiracy theorist” to see them, just a normally observant human being. Just because we have grown accustomed to seeing them does not mean that the motive behind them is benign. It isn’t. 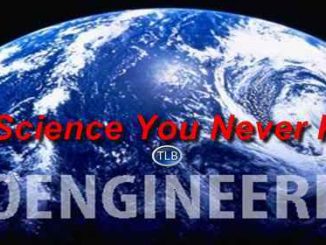 The Science of Geo-Engineering You Never Knew 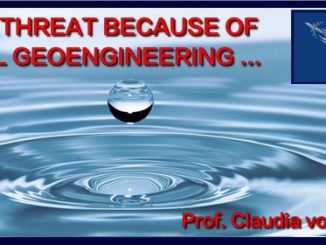 The Planet Is Not Warming Up But Drying Out!