ER Editor: Readers may also be interested in this Times of Israel piece titled Zelensky win makes Ukraine 1st country outside Israel with Jewish PM, president, and this from Tablet magazine,Ukraine’s New President Is a Jewish Comedian.

Landslide victory for Zelensky over Poroshenko in Ukrainian presidential election

In the second round of Ukraine’s presidential election on Sunday, comedian Volodomyr Zelensky won a landslide victory over the incumbent president, Petro Poroshenko, who was brought to power in an imperialist-backed far-right coup in February 2014. 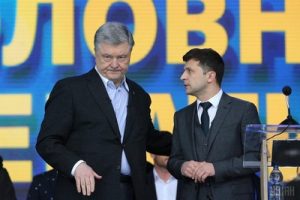 24.61 percent for Poroshenko (less than 3.4 million votes). In the face of the overwhelming vote for Zelensky, Poroshenko quickly conceded defeat, stating that while he was “leaving office,” he was not “leaving politics.” With the exception of a small province in western Ukraine, the entire country voted overwhelmingly for Zelensky.

The victor will officially be sworn into office in June. In the wake of Zelensky’s victory on Sunday, his campaign staff reported that he had already received congratulatory phone calls from French President Emmanuel Macron and US President Donald Trump.

The election results reflect, above all, the enormous popular hostility toward the right-wing nationalist and militarist policies of the Poroshenko regime, which was installed in 2014 by the imperialist powers as a puppet regime to spearhead their war preparations against Russia.

Since then, Poroshenko has subjected the Ukrainian working class to far-reaching austerity measures, the continuation of the war in the east of the country and extreme nationalism and xenophobia. His presidency has relied heavily on the promotion of far-right forces. His government banned references to communism and the victory of the Red Army aganst Nazism in World War II, and made the glorification of the Nazi collaborators of Stepan Bandera’s Organization of Ukrainian Nationalists-B (OUN-B) and the Ukrainian Insurgent Army (UPA) official state policy.

Poroshenko’s entire presidential campaign was based on whipping up militarism and anti-Russian xenophobia. It followed a major military provocation in the Azov Sea against Russia and the declaration of martial law in several regions of the country where Ukrainian workers had joined strikes and protests against poverty wages and austerity.

In the weeks prior to the election, Poroshenko attempted to portray Zelensky as an agent of Russian President Vladimir Putin, claiming that a vote for Zelenskiy would lead to Ukraine’s return to the “Russian empire.”

Poroshenko will leave office as one of the most despised incumbent presidents in modern European political history, with close to 60 percent of the population holding a negative view of him, according to one recent poll.

Zelensky, despite his appeals to anti-war sentiment and to popular hostility to austerity measures, is a representative of the Ukrainian oligarchy and will act on its behalf and on behalf of Western imperialism. In all essentials, his agenda will continue the hated policies of Poroshenko. 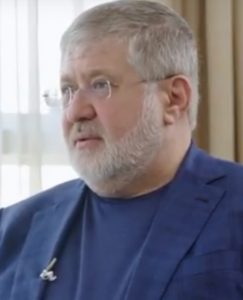 He is a close associate of Ukrainian oligarch Ihor Kolomoysky (pictured), the owner of Ukraine’s 1+1 Media Group, who has been living in exile in Israel in recent years and is now planning to return to Ukraine.

Zelensky’s most important meeting during the campaign took place not in Ukraine, but rather in France, where he met with French President Macron. In a sign that Western imperialism was orienting itself towards working with a Zelensky presidency, Macron met with Zelensky in mid-April (pictured below),prior to a separate meeting with Poroshenko.

Little is known about what was discussed between Macron and Zelensky, with the latter stating simply, “We discussed life and essentials. Ending the war in Donbass.” Zelensky had previously expressed his admiration for Macron, who has been mobilizing the French army to crush protests against social inequality by the “yellow vests.”

Zelensky has reportedly hired a public relations firm in Washington to set up meetings with representatives of the Trump administration and various US think tanks.

He won much of his support by criticizing the blatant corruption of the Poroshenko regime and by making fraudulent promises to end the war in Donbass, negotiate directly with Putin and work to prevent a full- 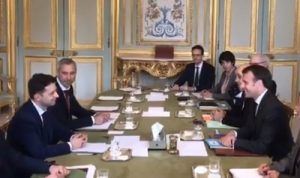 scale war with Russia. However, in an interview with RBK Ukraine given shortly before Sunday’s election, Zelenskiy called Russia an “aggressor” in Donbass and Putin an “enemy.” He expressed his support for the banning of Russian-language press and artists, and called World War II Ukrainian war criminal Stepan Bandera, who worked with the Nazis to persecute the Jews, a “hero,” who “defended the freedom of Ukraine.”

He proclaimed that he did not plan to deviate from the proposed entry of Ukraine into NATO and promised to hold a referendum on the issue, pledging to “win over” skeptical Ukrainians in the east of the country. Zelensky is also a long-standing supporter of Ukrainian membership in the European Union. The entry of Ukraine into both the EU and NATO would signify a major provocation and escalation of tensions with Russia.

Throughout the campaign, Zelensky was careful to not reveal anything concrete about his economic agenda, but in his interview with RBK Ukraine, he admitted to being a supporter of all types of “deregulation”—in other words, the elimination of what remains of Ukraine’s social services.

He has won the support of several prominent free market “reformers” within Ukraine, including ex-Finance Minister Oleksandr Danylyuk and former Economy Minister Aivaras Abromavicius. Abromavicius is notorious for his attempts to push through the wide scale privatization and sale of Ukraine’s remaining state-owned industries.

Both Zelensky and Abromavicius are dedicated to carrying out the orders of the International Monetary Fund (IMF) and have stated that Ukraine will remain in the IMF loan program for as long as necessary. Zelensky has also proposed to end a moratorium on the selling of farmland, per IMF order, and has equivocated on the IMF-ordered hiking of natural gas prices, which plunged many Ukrainians into the cold the past winter.

Regarding education, one of Zelensky’s advisors, Serhiy Babak, suggested that a massive privatization of public education was on the cards, stating, “We will open the market for educational services for private initiatives and for foreign educational institutions, and we will develop a state partnership [with private educational organizations].” 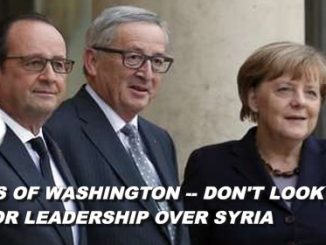