Italy had its national day this past Tuesday, which saw several public protests. Two prominent ones were the Orange Vest demonstrations in both Milan and Rome, and the populist right march in Rome, with three of Italy’s right-wing political figures, including Matteo Salvini.

If you do a search for ‘orange vests Italy’, you get surprisingly little, but Time/AP, which Zerohedge cites below, calls them ‘coronavirus deniers’, another outlet calls them Italy’s ‘right-wing opposition’. The Daily Express, obsessed as it is with EU-hatred, calls them ‘anti-EU’ protestors. RT produces the most results and we’re posting one of their short videos here to get an idea.

The Daily Express piece of yesterday reveals that they’re demanding exiting the EU, returning to the lira, and getting rid of the technocratic government of Giuseppe Conte:

Fed-up protesters in Italy erupted in fury as they clashed with police in both Milan and Rome. Italian businesses have only recently been allowed to reopen after more than two months of a strict nationwide lockdown meant to curb the spread of the virus. However, hundreds took to the streets in the two major Italian cities to demand an immediate end to the restrictions.

The anti-lockdown groups were also demanding for Prime Minister Giuseppe Conte’s government to immediately resign and call a new election.

Others called for a “return to the Italian lira” – Italy’s currency prior to the introduction of the euro.

Protesters chanted anti-EU slogans, including ‘Stop Euro’ and ‘Italexit,’ as they demanded a swift exit from the eurozone.

Some also vented their anger at the economic hardship the lockdown has imposed, with businesses forced to shut as thousands struggle with income.

We remind readers of two articles we published this week, translations of Italian reports, on the evidence-based claims of Dr. Alberto Zangrillo, head of San Raffaele’s (Milan) ICU unit and personal physician to Silvio Berlusconi, who claims the virus has completely lost steam in the way it currently presents in patients. See Coronavirus in Italy: “Covid no longer exists, someone is terrorizing the country” – ICU doctor and Italy: The Coronavirus is Far Less Capable of Replication – It’s a ‘Different Disease’.

According to other articles we’ve published, Italy’s sick and elderly population in its northern areas was hit in precisely the same way as those in other countries despite some extra features that people in this region had to cope with (heavy pollution, two recent rounds of vaccinations, an aging population, a smoking habit, and an underfunded hospital 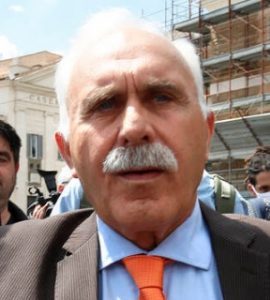 system). Which likely means, despite the dramatic press coverage we’ve seen, that many Italians were not particularly affected by the virus, just like the rest of us, yet had to suffer an economically crippling lockdown. That on top of an economy that has always suffered greatly by being obliged to use the euro instead of its own currency. General Antonio Pappalardo (pictured), the movement’s leader, had this to say about the virus scare:

“The pandemic does not exist, they are total bulls–t,” Pappalardo said on Sunday at a rally in Bari, the Italian news agency ANSA reported. “The coronavirus is not fatal, it only kills those who are already over 80 years old. Enough lies and lies, you have terrified the Italian people,” he was quoted as saying.

It’s clear he’s denouncing the claim about it being a ‘pandemic’ and not that the virus doesn’t exist.

It all sounds depressingly familiar.

Italy fully opened up in the last few days.

Hundreds of Italian demonstrators gathered in Rome’s Piazza del Popolo on Tuesday, ditching their masks in a protest against the Italian government’s lockdown restrictions aimed at controlling the spread of COVID-19.

The group, which calls themselves the ‘Orange Vests,’ is led by retired Carabinieri general Antonio Pappalardo, who doesn’t believe children should be made to wear masks, according to TIME.

Refusing to wear a mask himself, Pappalardo said “These lungs mine. I will take care of my lungs. Breathing is sacred.”

The people packing the square didn’t adhere to social-distancing guidelines set by the government.

Pappalardo portrayed such containment measures as an infringement of freedom. Other speakers at the protest asserted that the pandemic ‘’never existed’’ and alleged that politicians had played it up to enhance their own powers. –TIME

Elsewhere in Rome, opposition leaders, including League Party chief Matteo Salvini, marched on Tuesday to demand that the government resign.

Unveiling an Italian flag along the Via del Corso, Rome’s central artery, the gathering soon turned into a procession led by Salvini and two other party leaders: Giorgia Meloni of the right-wing Brothers of Italy, and Antonio Tajani, who co-founded former PM Silvio Berlusconi’s center-right Forza Italia, according to France24.

According to a Facebook post by Salvini, the march was “a symbolic gesture to make heard the voices of the citizens who do not give up.”

As Italy faces the worst recession since the war, the crisis could further bolster the far-right with the country scrambling to support businesses.

“There is an immediate need for money for the Italians, yet we are promised the recovery fund in 2021,” Salvini told reporters, referring to the 750-billion-euro European recovery plan.

“There can be no forgotten Italian workers,” he added.

He also expressed opposition to the government’s decision to temporarily allow illegal migrants to work on the land or as domestic helpers. – France24

Salvini was spared standing trial last week by a special committee over allegations of illegally detaining migrants at sea.

West Point Tackles ‘Toxic Masculinity’ And We Should Be Very Alarmed