In an example of just how far governments and politicians will take the war on individual freedom and parental choice, Forza Italia MP, Elvira Savino, has put forward a proposal that would imprison parents who forced their children to eat a vegan diet.

Savino argues that veganism “lack[s], essential elements for a healthy growth” and that parents who implement a diet plan of this type for children under 16 should spend up to two years in prison.

Savino, who is considered center-right, said she put forward the proposal in order to protect children from “radicalized” parents, a need she sees because of the increase of adults in adopting vegetarian and vegan diets.

Savino believes vegan diets lack sufficient qualities of iron, zinc and B12. The law would have parents facing one year in jail and two and half years if the child gets “permanently sick or hurt” as a result of the diet. If the child dies, the parents face six years.

Although it is estimated that only 8% of Italians are vegetarian or vegan, a number of stories circulating in the European press, have reported what is being framed as cases of malnutrition as a result of a vegan diet. The recent attention has given Savino the opportunity to put forward the proposal.

It is unclear whether or not Savino’s proposed law will ever actually pass. Hopefully, even in Europe, there is still enough a sense of individual, parental and human rights from doing so. But what it does highlight is the increasing march toward the control of children and the infiltration and disruption of the family unit by the state and its forces.

While such a law may seem sensible to some who have less of an understanding of the importance of keeping family and state separate – to others, it represents an obvious slippery slope. If Savino is able to get her law passed, where will the dictates end? 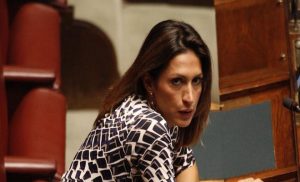 If a vegan diet is considered child abuse, what else might be considered child abuse by the state or by a bureaucrat whose only relevant sources for his opinion are his beliefs and his feelings? After all, what is Savino’s position other than a belief? Savino is not a doctor, nor is she a nutritionist. She is an economist. Judging by the state of the Italian economy, it appears the experts in this profession are incompetent in their own field, much less, in someone else’s.

If Savino’s belief that vegan children are deficient in nutrition despite her having no credentials or qualifications to make that claim, then why can’t that same logic be applied to parents who believe their children should not take vaccines? After all, if you have a belief, you should make it into a law, right?

Even more to the point – Savino’s belief is merely coming into conflict with the belief of vegan parents. So is the solution to elect a vegan MP who will then impose veganism on Italy? Or perhaps, Savino simply needs to set forth a new proposal to force each and every Italian child to eat at least one serving of meat per day whether they want it or not. Being an economist, Savino would be well aware of the amount of jobs this proposal would create. Just imagine, a nationwide army of scowling social workers forcing children to sit at the table until they eat their meatloaf.

Perhaps Savino would be better served to write up a bill that explains what children are allowed to eat, how much, and at what time of the day. She should then include a manual on how to prepare the meals with informational tips about what to do if the child is unhappy with the meal and criminal penalties if the meal is prepared improperly.

Failure to comply could result in 20 years in prison or the death penalty. That way we can ensure that all of Italy follows Elvira Savino’s diet plan and that no one has the right or the opportunity to decide what they put into their bodies and what they eat. Or, Savino could simply retract her ridiculous law and reaffirm the fact that in the 21st century, Italians are allowed to eat what they choose, and to raise their children in the way they see fit.

Brandon Turbeville – article archive here – is an author out of Florence, South Carolina. He is the author of six books, Codex Alimentarius — The End of Health Freedom, 7 Real Conspiracies, Five Sense Solutions and Dispatches From a Dissident, volume 1 and volume 2, The Road to Damascus: The Anglo-American Assault on Syria, and The Difference it Makes: 36 Reasons Why Hillary Clinton Should Never Be President. Turbeville has published over 600 articles dealing on a wide variety of subjects including health, economics, government corruption, and civil liberties. Brandon Turbeville’s podcast Truth on The Tracks can be found every Monday night 9 pm EST at UCYTV. He is available for radio and TV interviews. Please contact activistpost (at) gmail.com.