Italy steps in with €20bn to save failing bank

Paolo Gentiloni, Italy’s new prime minister, said during the night after an extraordinary cabinet meeting that the government would be tapping into a €20 billion fund that had already been approved by the parliament earlier this week. 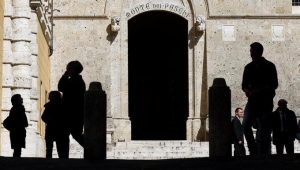 Monte dei Paschi, which had raised just €2.5 billion in private funds, had asked for a “precautionary” capital increase from the state.

Finance minister Pier Carlo Padoan did not specify how much the rescue would cost Italian taxpayers.

“We will see if other banks ask for aid,” Padoan told journalists. Other Italian lenders, like Veneto Banca and Banca Popolare di Vicenza might also need government help.

Under EU bailout rules that came into force in January in order to protect the taxpayers from paying for bank losses, junior bondholders will also have to take losses, as their bonds will need to be converted into shares.

Padoan said the government would compensate small savers for their losses.

Small investors are estimated to hold some €2 billion of Monte dei Paschi’s bonds.

Italy’s banks are struggling under the weight of €360 billion of bad loans, while Italy, the eurozone’s third largest economy, is also dealing with slow economic growth and political uncertainty after the resignation of previous prime minister Matteo Renzi earlier this month.

Eszter Zalan is a journalist at Euobserver

The farcical relations of EU countries with Russia – case in point, Italy