ER Editor: The short piece below has been machine-translated.

Here is an MSM take on the situation: Weapons amnesty begins for French owners of illegal arms

The articles linked to below can be translated in browsers. Here is the translation of the first article: 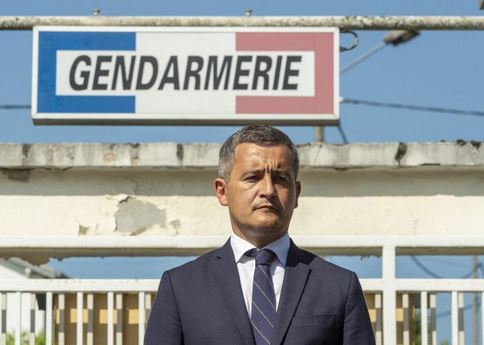 Curious request from the French government, in this period. Curiously, the word Kalashnikov is not pronounced, and no solution seems to be envisaged to solve the problem of Africans armed with knives, who, curiously, often strike non-Muslims in the throat.

Incapable of enforcing order in the Islamized cities, the State does not seem any more determined to send the forces of order there to recover weapons held illegally. And no more in the mosques!

So who is targeted? The French, of course, the main victims of African crime, whom this rotten government intends to prohibit from defending themselves in the event of aggression or burglary.

I remind you that the prefect Morvan, in the Yvelines (ER: a well-to-do area west of Paris proper), had me banned from arms and the right to shoot because of my writings!

It is also said that the authorizations for the possession of legal weapons, renewable every five years, will be studied closely, and that certain sports shooters could be deprived of weapons, because survivalists, or Zemmourians (ER: Eric Zemmour, a supposedly ‘far right’ candidate financed at arms length by the Rothschilds), or others…

So expect, after December 2, massive raids by robocops, judges and police commissioners, at 6 a.m., on many French people suspected of wanting to defend themselves, or denounced by a friendly neighbor.

If you want to surrender your weapons, behave like good citizens, and obey. Otherwise, be imaginative, for example by digging holes in your garden…

This disarmament of the French will last until December 2, do not ask me why…

“Why does Darmanin want the French to surrender their weapons? “
https://ripostelaique.com/pourquoi-darmanin-veut-il-que-les-french-rendent-leurs-armes.html

“Gérald Darmanin announces measures to better control the possession of weapons”
Read carefully:  A regulation demanded by women’s rights associations which point the finger at the use of firearms in feminicides. https://www.tf1info.fr/societe/gerald-darmanin-annonce-des-mesures-pour-mieux-controler-la-detention-d-armes-2192156.html We believe we are dreaming!! Who are we laughing at ? In general, feminicides are done with punches or kicks or blunt objects, very rarely with firearms!!!

“Gérald Darmanin has announced that the government will propose a ban on the acquisition and possession of transformed weapons of war“
https://atlantico.fr/article/pepite/gerald-darmanin-a-annonce-que-le -government-was-going-to-propose-a-ban-on-the-acquisition-and-possession-of-converted-weapons-of-war

If there are weapons of war, it’s in the suburbs that you have to look for them…

Today, all the murders committed by immigrants, illegal or not, are with knives.
When I was young, in Marseilles, the cops arrested “shady” guys (face checks) (you see who…), searched them completely and confiscated their knives. In case of recidivism, they beat them in the cellars of the police stations or the prefecture.
But it was very quiet then, not like it is today.
Finally, I say that, I say nothing.

Macron is indeed lower and lower in all international polls and gazes and he can no longer count on anyone’s support.

His disproportionate ego and his outrageous megalomania as a psychopath to the last degree do not allow him to accept failure and he will prefer, like his friend Zelensky in Ukraine, to finish destroying France completely rather than to admit defeat, to beat a retreat. and to relinquish illegitimate power that he stole from the French people.

He is an extremely dangerous and desperate man and no one can know what dark decisions he will still take to persecute the French people.

But we must never forget that he swore to his globalist masters to carry out the total destruction of France.

At the same time, he knows that his behavior for six years towards the French has been such that he no longer has any illusions to entertain and that even his escape abroad will undoubtedly be very difficult.

Indeed, it is generally at the approach of serious disturbances, a wind of revolt, rumors of insurrection and also because of an unwanted, hateful and violent invasion, that the French have always been disarmed (confiscation of weapons) against their enemies, in full betrayal of their elites.

On the one hand, the badly paid police forces, despised and humiliated by the State, sent to hell and forbidden to protect their own lives, blindly obey the most treacherous injunctions of their supervising minister and the red judges (traitors to the nation for a long time) are already preparing to treat like criminals these dangerous Gauls illegally armed with a few dusty old escopettes that have been lying around in the back of their attic for centuries.

(ER: the above paragraph captures the problematic nature of the police in France: they ARE treated badly and underpaid by the state, along with all the migrant problems they have to face in the no-go zones and take full responsibility for. Suicide rates among them have been high for some years. However, they do respond like zombies to the orders of their superiors when it comes to being thoroughly, gratuitously violent with the Gilets Jaunes, for example. We’ve seen it dawn on reasonable people here, who normally defend all things French, how violent their police are. )

If I were a policeman or a gendarme today, I wouldn’t commit suicide, as many do and they are wrong, but I would resign and go find another job, in France or in another country.

On the other hand, we observe the most vile and flattering courtship and the licking of shoes to which the Islamic terrorist forces are subjected (we must no longer say Muslim, because we take a lawsuit in the teeth with each blow!) by our government “elites”. Terrorist forces that store hundreds of thousands, if not millions, of the latest generation of war weapons in the walled and repainted basements and cellars of housing estates, in red-light districts and suburbs that are inaccessible to anyone today who does not belong to their community of peace, love and tolerance.

Initially, the holders will be able to drop them off at the gendarmerie or in the police stations without any penalty.

However, the procedure is very secure. If you wish to drop off weapons, you must leave them in your car in the parking lot and report that you have weapons to drop off and a police officer or gendarme will come and pick them up with you in your vehicle. All weapons deposited (and not returned, since they never belonged to these forces of order) will supposedly be destined to be destroyed. I don’t believe a word of it.

Weapons in good condition will be recovered by the State.

Subsequently, severe penalties will be applied to offenders.

For my part, I have no advice to give on this question.

I don’t own any prohibited weapons and that’s fine.

Anyway, you’re not allowed to carry them, so it’s useless against a nice immigrant who will slit your throat along the way and continue on his way quietly, as we see him do every day. (ER: To be fair, this type of murder has become fashionable.) In addition, if you fight back and have the misfortune to hurt him, it will be 20 years in prison for you (if you are not dead, of course!).

That said, there are other ways to protect yourself and to protect your family and your belongings, bows and crossbows for combat or simple enough powerful target shooting, whose arrows and bolts can be made heavier and the triggering power can be increased.

Then, the smartest can always give free rein to their imagination…

This civil war against enemies of France from inside and outside will very quickly overflow and become European.

It will set Europe on fire and blood. It will be multi-faceted: social, political, inter-religious, inter-ethnic and interracial. Everyone knows it. But our leaders don’t care…

Much happiness to all!

France: A Government Desperate Enough to Rebrand Citizens as Nazis

French Police Angry at the Absurd Requirement to Wear Masks