On December 16, 2015, a French journalist on a mainstream radio station compared France’s right-wing National Front Party to the Islamic State (ISIS) by saying that there is a “community of spirit” between them and that both push those who support them to “withdraw into their own identity”. Marine Le Pen, the president of the National Front party, speaking of an “unacceptable verbal slippage,” asked the radio station for the right to answer. She then published on Twitter images showing the bodies of victims of the Islamic State and adding: “ISIS is this!”

The French media immediately accused her of broadcasting “indecent” and “obscene” images, and shortly after that, the French government ordered the Department of Justice to indict her. On November 8, 2017 the French national assembly also lifted her parliamentary immunity.

A few months later, a judge mandated by the French government, charged Marine Le Pen with “disseminating violent images,” citing article 227-24 of the French Penal Code, which defines the crime of:

“… disseminating… a message of a violent nature, inciting terrorism, pornographic or likely to seriously violate human dignity or to incite minors to engage in games that physically endanger them, or to commercialize such a message.”

As part of the proceedings, Marine Le Pen received a letter from the court ordering her to undergo a psychiatric evaluation to determine if she is sane. She refused, saying that showing horrors committed by the Islamic State is not incitement to murder, and that pictures of victims of terrorism cannot be equated with pornography.

The court’s request indicates that the French authorities might be reviving the old Soviet use of “psychiatry” to silence dissidents or political opponents.

At the moment, Le Pen can be arrested anywhere, at any time and could face up to five years in prison.

As a presidential candidate in May 2017, she received 34% of the vote in the second round of voting. Sending her to jail could provoke anger among her supporters, so her arrest is not expected.

What seems more probable is an effort to intimidate her, and if possible, to destroy her politically. A few weeks ago, the French government asked magistrates responsible for investigating “financial crimes” to seize two million euros ($2.3 million) of public funds granted to Marine Le Pen’s party, which has since ceased almost all public activities. The legal offensive against Marine Le Pen was actually added to the financial offensive. Even if Le Pen is not sent to prison, the law seems to have been used to open the possibility of declaring her ineligible for the European Parliament elections scheduled for May 2019.

French President Emmanuel Macron knows that today, Le Pen’s party is his main opposition in France and that Le Pen is his main political opponent. He describes himself as the champion of the “progressive” vision of Europe and the main enemy of those who want to resist Islamization, uncontrolled immigration, and who wish to defend national sovereignty — views he has described as “leprosy” and “evil winds“. He has verbally blasted Italian Deputy Prime Minister and 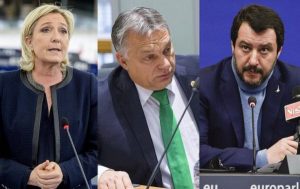 Interior Minister Matteo Salvini, as well as Hungarian Prime Minister Viktor Orbán, who are creating a European alliance of nationalist movements that include Le Pen’s party. On the contrary, Macron supports European sanctions against Hungary and Poland if they refuse to accept more migrants.

Macron sees that a victory of the Salvini-Orban alliance would not only be a humiliation for him, but that a victory of Le Pen’s party in France could mean the final collapse of his crumbling presidency (his approval rating, which has fallen 6 points in the last month, now stands at 23%). He cannot crush the Salvini-Orban alliance, but he can affect the political process in France.

Macron’s stance against Le Pen might also be an attempt by his government to ward off more Islamic violence in France. Presently, books and publications that reference the violent dimension inherent in Islam are boycotted and absent from bookstores (the Quran, however, is still widely available). Organizations that fight the Islamization of France and Europe are judicially harassed. Pierre Cassen and Christine Tasin, the leaders of the main French anti-Islamization website, Riposte Laïque (“Secular Response”), must spend a disproportionate amount of time in court and are heavily fined on a regular basis. To avoid having their website closed down, they have had to relocate their website outside both France and the European Union.

A 615-page report was recently released, written by an adviser to Macron, Hakim El Karoui, who is in charge of designing the new institutions of an “Islam of France.” The report defines Islamism as an “ideology totally distinct from Islam” and also never addresses the links between Islamism and terrorism. The report also insists on the urgent need to spread “true Islam” in France and adopt the teaching of Arabic in public high schools.

In the French media, any mention of the links between Islam and violence has now been almost completely eliminated. When a Muslim commits a knife attack and shouts “Allahu Akbar” (“Allah is the greatest”), the official message published even before any investigation invariably declares that what happened had “nothing to do with Islam” and “no terrorist character“. All the media then blindly quote the message. In the most recent attack of this kind, on September 9 in Paris, seven people were wounded, four seriously. 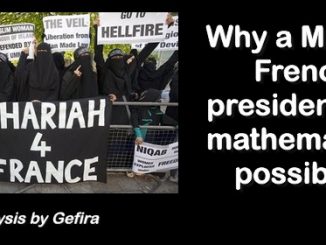 Could France be the first European country with a Muslim president?

COVID: Is Macron Wrong to Fear an Insurrection?

Not One but TWO Effective, Safe and Inexpensive Cures for Covid Exist [VIDEO]