The Most Important U.N. Security Council Vote Ever?

It could well turn out to have been the vote on whether or not World War III starts now.

On Tuesday, April 10th, the U.S. and France were sending missiles, ships, planes and soldiers for an invasion of Syria, which is defended by Russia; and two alternative draft proposals were presented to the U.N. Security Council for authorizing an expert investigation to be done into the alleged April 4th chemical attack in Douma in Syria, which the U.S. and France claim to be the justification for their planned invasion.

One proposal, from the United States, would have sidelined the existing official investigative agency for chemical weapons, the Organisation for the Prohibition of Chemical Weapons (OPCW), and set up a brand new “independent mechanism of investigation to determinate accountability” for the chemical-weapon attack that the U.S. and its allies allege to have happened, but for which no evidence had been presented (other than alleged videos of it that were taken and spread by the White Helmets branch of Al Qaeda in Syria, the group the U.S. and its allies praise for helping injured ‘rebels’ and their associates). Russia vetoed the U.S. proposal because by the time such a new organization would be set up and officially accuse the Syrian and Russian Governments for the presumed chemical attack, the war between the U.S. and Russia would probably already be long past, and so the U.S. proposal couldn’t possibly prevent the U.S.-led invasion of Syria, anyway. Russia had been hoping to prevent an attack for long enough so that the OPCW, which was due to leave for Syria on April 10th, could get to Douma in order to examine to find any residues of a chemical weapons attack there, if such even existed, but the U.S. and its allies wanted to invade without there being any such investigation preceding the invasion.

As regards whether or not there had actually been a chemical attack in Douma, the only public information (other than the video that was produced by the White Helmets) was a news report published on April 9th by Russia, which is likely to be as much ignored by Americans as news reports by the U.S. are ignored by Russians, and it was headlined “No trace of chemical weapons at alleged attack site in Douma – Russian military”, and it stated:

The Russian military has found no trace of chemical weapons use after searching parts of Syria’s Douma allegedly targeted by an “attack.” Photos of victims posted by the White Helmets are fake, Russia’s Defense Ministry said.

Experts in radiological, chemical and biological warfare, as well as medics, on Monday inspected the parts of the Eastern Ghouta city of Douma, where an alleged chemical attack supposedly took place on Saturday, the Russian Reconciliation Center for Syria said in a statement.

The specialists “found no traces of the use of chemical agents” after searching the sites, the statement said. The center’s medical specialists also visited a local hospital but found no patients that showed signs of chemical weapons poisoning. “All these facts show… that no chemical weapons were used in the town of Douma, as it was claimed by the White Helmets,” the statement said, referring to the controversial “civil defense” group that was among the first to report about the alleged attack.

Then, late on April 10th, Russian Television headlined “Europe air traffic control issues alert over ‘possible air strikes on Syria within 72 hours’”, and the U.S. and France were set for a full-force invasion, which was expected to target especially “Damascus, Homs, Tartus, Hama, Deir ez Zor, and Rakka. In particular, it is planned to strike the area of the Russian military base in Tartus.”

Some people expect these attacks to be met by counterattacks from Syria, Russia, Hezbollah, and Iran, but some expect them to be so defeated in Syria as to surrender, and for Russia also not to launch nuclear attacks against the invaders for having started WW III on the basis of unexamined accusations.

In any case, the question can be considered, even before the outcome is known (and if the world still exists after that), as to whether the U.S. and its allies are invading upon even shabbier ‘evidence’ than it had invaded Iraq in 2003. In domestic matters, the comparable situation exists when a lynch mob seeks to kill a seized person without any investigatory process at all, but only upon the allegation by the mob saying that the person who is being lynched is ‘guilty’. However, when this is done in international matters, and the attackers are calling themselves ‘democracies’, the situation is even worse than merely a domestic lynching. And this could factor into the Russian Government’s decision as to how to respond to these invasions of its ally.

The present situation could be even more dangerous than was the 1962 Cuban Missile Crisis.

NATO on The Brink of Implosion? 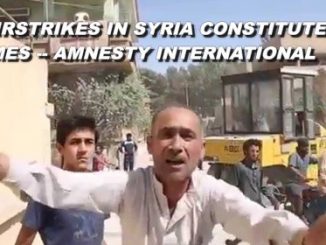