ER Editor: When you can find them, the figures in these reports, if accurate, are interesting because we get an idea of the scale of illegal migration which, of course, gets no mention in the MSM.

While this is not illegal migration, Ukrainian refugees in Ireland total around 70,000 according to latest reports. Due to the accommodation shortage in Ireland, people with additional properties can get 800 euros per month if they make their properties available for housing. See In Dublin, 800 euros will be paid for the accommodation of Ukrainian refugees: how to get it.

This is just our theory, but the globalist elites CAN SPONSOR / SELECT anti-immigration political candidates such as Matteo Salvini, former Austrian Chancellor Sebastian Kurz, Eric Zemmour in France, etc. precisely BECAUSE ILLEGALS ARE PILING IN ANYWAY, by whatever mechanisms have been put in place for some time (NGOs, smuggling networks, etc.). You fund both sides so that people have the illusion of choice and flock to these ‘populist’ (they’re anything but) candidates; meanwhile, the illegals continue to pile in clandestinely.

While attention was focused on Ukraine, inflows jumped to the highest levels since the height of the migrant crisis

Illegal immigration into the EU is at the highest level seen since the continent’s 2015-2016 migrant crisis, having ballooned as member states are also struggling to cope with huge influxes of refugees displaced by the Russia-Ukraine conflict.

FILE PHOTO: Migrants walk along a railway track to cross from Serbia into Hungary, entering the EU, in August 2015. © Getty Images / Matt Cardy
.

There were 308,000 “irregular entries” detected across the external borders of European Union nations in this year’s first 11 months, up 68% from the same period in 2021, according to a report earlier this month by Frontex, the bloc’s border agency. With one month still to go, inflows were already higher than any full-year total since 2016.

As noted by Breitbart News, which reported on the migration figures earlier on Saturday, the surge in illegal immigration got little public attention this year because Europeans were focused on the Ukraine crisis. The Frontex statistics don’t include the millions of Ukrainian refugees who flooded into EU nations amid the fighting in their country.

While legitimate refugees aren’t counted as “irregular entries,” many of the foreigners flooding into Western Europe are economic migrants (ER: the new term for illegals). For instance, the largest share of migrants crossing the English Channel to seek asylum in the UK are from Albania, which isn’t at war.

The Western Balkan and Central Mediterranean routes have the most migrant traffic this year, according to Frontex. There were 27,000 irregular border crossings into EU states in November alone. The agency said it’s providing more than 2,100 officers to help countries cope with “heavy migratory pressure and other challenges at their borders.”

ER: this visual gives us an idea of where these routes are — 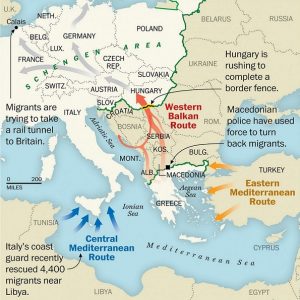 Johnson Wins Majority to Get Brexit Done, But What on Earth Comes Next for Joe Public?