ER Editor: In this case, there seems to be no specification of what a ‘warning mechanism’ could constitute. From an article in Hungary Today dated January 29, 2019 titled Govt: Hungary, Poland against UN Migration Compact ‘Brought through Back Door’, it seems the fear is that some shenanigans by pro-mass migrationist bureaucrats will take place at the level of official documentation:

These successes aimed at stopping migration generated “a desire for revenge by EU and UN bureaucrats,” he (ER: Peter Szijjártó, Hungary’s FM) said. In addition to “taking revenge on central European countries for the failure of the mandatory migrant quota and the unenthusiastic reception of the global migration compact”, they keep trying to bring back the issue “through the back door”, he said.

There has been a “clearly noticeable effort to revive the [pact] by inserting separate paragraphs into various UN and EU documents,” in order to create an international legal point of reference, he said.

Hungary’s Foreign Minister Peter Szijjarto told Hungarian news agency MTI that he had reached an agreement with Poland’s Interior Minister and his Estonian counterpart on establishing a warning mechanism against the UN Global Compact on Migration.

BUDAPEST – “It has once again been made clear that pro-migration forces want to make the United Nations’ global migration compact, the world’s most dangerous migration document, mandatory,” Szijjarto said on Monday.

At the UN General Assembly’s recent vote on the implementation of the Global Migration Compact adopted last December, 118 countries voted in favour of the document, five against it, with 13 abstentions and 57 countries not voting,

Hungary, the United States, Poland and Israel had already rejected the document last December, and they were joined in the most recent vote by Estonia, the minister said. None of the Visegrad Group countries backed the compact’s implementation, with the Czech Republic abstaining and Slovakia staying away from the most recent vote, he said, arguing that this again demonstrated the strength of the V4’s unity.

Anything approved by the UN becomes part of international law and judicial practice, Szijjarto insisted, underlining the need to fight “pro-migration proposals”.

The minister confirmed that he had reached an agreement with Poland’s Interior Minister and his Estonian counterpart on establishing a warning mechanism enabling their countries to “move against such pro-migration proposals in their early phases, whether they are drawn up in the UN or in Brussels”.

The head of the Hungarian Prime Minister’s Office said on Thursday that Germany’s Ursula von der Leyen (pictured) would not have been nominated for the post of European Commission president without support from the Hungarian government and the Visegrad countries and she “could not have been elected without the votes of (Hungary’s ruling) Fidesz MEPs”.

Gergely Gulyas pointed out that the new Commission would have to “fix many mistakes left behind by outgoing EC head Jean-Claude Juncker” such as the way the body handled the migration crisis.

He also criticised the EC for delays in increasing the efficiency of border controls and its “failure to reimburse Hungary for its border control measures”. 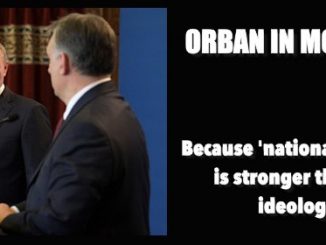 Where It Hurts: Poland Must Pay 1 million Euros PER DAY in Rule-of-Law Row with EU

500 Climate Scientists Write To UN: There Is No Climate Emergency