ER Editor: The French news site Reseau International has published a couple of reports with accompanying videos (with English subtitles where required). One shows a minute of surveillance footage at 5:05pm, taken from a distance, which clearly shows someone on top of the cathedral walking around and lighting up something at a couple of given moments. (The fire would start, or at least be noticed to start, at around 6:45 – 7:00pm.) The other is an interview on French television with a retired architect, Benjamin Mouton, formerly involved in the Notre Dame restoration work for 13 years, who would now be silenced by Macron. Reluctant to claim arson, he attests to the fact that there is no way from an engineering or surveillance point of view that the fire could have started accidentally. This second report also shows how solid oak beams don’t easily burn even when made to do so (video).

The FreeWest Media report below the videos gives Macron’s response to the Notre Dame suspicions, and information on his declining popularity after his multi-weeks-long Great Debate.

There is also a second short video that we recommend going to, but isn’t broadcast through Youtube.  Here is the link.

The interview with Mouton has English subtitles.

The French government has forbidden all state-employed architects to give further interviews about the fire at the Notre Dame. President Macron’s credibility is now on the line.

Riposte Laïque, a French news outlet, said the blaze that engulfed Notre-Dame was suspect because the French Ministry of Culture has forbidden the architects who work for the Monuments Historiques, the state body in charge of preserving the architectural heritage of France, to give interviews on the subject.

Yves-Marie Laulan, an economist and the director of the Geopolitical Institute, also questioned the notion that the fire had been started by accident:

1. How could those massive centuries-old oak beams go up in flames, like a humble matchstick? Everyone knows that seasoned oak timber dry with time and become as hard as concrete. By what means is it possible to set fire to that kind of centuries-old hardwood?

2. The fire started at the base of the cathedral spire. What was the spire resting on? How was it anchored to the underlying timber framework?

3. How could this gigantic frame of both wood and metal burst into flames without the help of some sort of highly combustible material placed either at its base or close by (wood shavings, dead leaves, the odd vegetable matter, or liquid accelerant)?

4. How can we account for the speed at which the fire spread from the base of the spire to the whole roof if there was no highly combustible material present on the roof of the cathedral?

5. How is it that some people could, without being hindered at all or encountering any difficulties, meander freely on the roof of the cathedral, as though they were on a public thoroughfare, climbing up the scaffoldings that had been erected against the planned restoration work, and this, just a few hours (or minutes) before the fire started.

After some enquiries, we learn that it might have been Simon Nogueira, who, we’ve been told is a professional “free runner”. And if this juvenile “hero” was able to climb up to the roof without being stopped, others less well-intentioned would have been able to do so as well.

Moreover, part of the measures announced by the President of the Republic has displeased a large majority of citizens.

If Emmanuel Macron had hoped to calm the crisis in the wake of the Notre Dame fire as well as of Yellow Vests, he has sorely missed the opportunity.

According to a Harris Interactive survey/Agence Epoka for French daily Le Figaro, RTL and LCI, the speech given in conclusion of the Great Debate, obviously did not please the French.

For good reason, at least 63 percent found the head of the state unconvincing. Only 30 percent of them found him “convincing” and 7 percent “very convincing”.

Of the measures listed, many were rejected by the public. Thus, 65 percent of French people are against the increase in working time, and 58 percent against the extension of the contribution period to have a full pension. 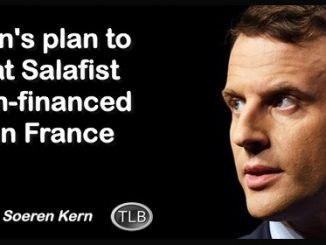 Using the Virus to Put Social Security in Danger, Hospitals Under Attack