Readers may be interested to know something in general about Dov Zakheim, the man claimed to be behind the missing $2.3 trillion. My apologies for taking a French source from Voltaire.net for this, titled Dov Zakheim, la caution du Pentagone by Paul Labarique.

A quickie, Coles Notes version: Zakheim, an economist and later a rabbi, became a key figure in Pentagon financing, placing him at the heart of the military-industrial complex; he was also a mediator between Washington and Tel Aviv, shaping Washington’s interests in relation to Israel. On a personal level, his father had been a friend of Menachem Begin and was from the same village as Yitzhak Shamir. Zakheim was also a member of the neocon foreign policy group, the Vulcans, formed by Condoleeza Rice. As financial director/comptroller at the Pentagon, he oversaw massive spending increases in weapons procurement. (It was in this capacity that Scott Bennett, below, writes about Zakheim’s alleged misappropriation of $2.3 trillion used to finance terrorism.)

One of his roles in the Reagan administration, for example, had been to liaise with the Israelis and prevent Israeli production of a jet fighter that, once developed, could be sold to US enemies. He also helped broker sales of McDonnell Douglas’ F-15 fighter jets to Saudi Arabia. He played a dual role in the private and public sectors, working for both McDonnell Douglas and Northrop Grumman while serving to procure weapons for the Department of Defense. In 2000, a year before 9/11, he was VP of System Planning Corp., an Arlington VA-based outfit. This company specialized in developing a system for controlling planes in flight from the ground.

He held part-time academic posts and think-tank memberships which placed him squarely in the heart of the neocon ideological landscape. Some of his memberships include(d): Center for Security Policy, Center for Strategic and International Studies, Heritage Foundation, and Council on Foreign Relations. He quit the Pentagon in 2004 to join Booz Allen Hamilton, where he became VP in the same year, taking over the post from former CIA director, James Woolsey.

As a military officer and also contractor for Booz Allen Hamilton, I was assigned to the Joint Interagency Operations Center at U.S. Central Command, where I identified, tracked, and reported on terrorists, their financial donors, networks, banks, and activities.

Part of my mission was to investigate, discover, and expose all acts of “waste, fraud, and abuse” by Terrorist Financing Operations Director Dov Zakheim, who was my senior supervisor. It was known that Dov Zakheim had secretly arranged for $2.3 trillion dollars to be mis-appropriated through Pentagon channels when he had been the Pentagon Comptroller.

I was assigned the task of penetrating Dov Zakheim’s terrorist financing operations, which involved his son Roger Zakheim (a lawyer at the House Armed Services Committee), an Iraqi named Abdullah Azziz (with close ties to Rudy Gulliani) and the law firm Covington and Burling.

The auditors investigating this matter were conveniently killed in a missile strike upon the Pentagon Office of Naval Intelligence on September 11, 2001. This missile strike was concealed as a “plane attack”, which was a deception operation.

I briefed your attorney Michael Cohen about these matters in 2015 and 2016—which may be one of the reasons he has been targeted by Deep State Shadow Government loyalists.

Evidence and expert testimony confirm without a doubt that the attacks on September 11, 2001 against the Pentagon (as well as the World Trade Center and the Solomon Building in N.Y.) were a well-planned, well-financed, psychological operation – a false flag attack on American soil – designed to trigger and manipulate the American people, the Congress, and the U.S. Military into a full-scale war-mobilization posture with the intent of overthrowing, scattering, and re-making the Middle East and Africa for the direct political, cultural, and economic benefit of the Zionist state of Israel.

9/11, although seemingly coherent, has led to a multi-trillion dollar nightmare for Americans. Because of your success in attacking the Deep State with your sealed indictments and other measures, and because of the failure of the DNI-CIA-FBI-DOJ “Russian Hoax,” as well as great fear that your forthcoming summit with President Vladimir Putin will be a great success, I fear for your life and pray for your safety.

You are our Chief Law Enforcement Officer, not just our Commander-in-Chief. It is my hope that this memorandum, combined with the other memoranda you are receiving from other informed patriots, will be helpful to you during the Helsinki summit, where I and many others hope that you and President Putin will share intelligence on 9/11 – who did it, how they did it, why they did it – face to face.

I believe that your leadership in placing the truth about 9/11 before the public will finish the job of taking down the Deep State and the Shadow Government – it will help you shut down the pernicious Zionist/Saudi penetration and subversion of the US economy, government, and society and it will help you demonstrate to the larger public, most of whom did not vote for you, that under your leadership, the US Government can be trusted to clean house and tell the truth.

Scott Bennett,  a U.S. Army Psychological Operations Officer, worked at U.S. Central Command’s Joint Interagency Operations Center.  Bennett was assigned to “Terrorist Threat Financing” and tasked with discovering terrorist financing networks (domestic and foreign), instruments, and bank accounts being used to fund Islamic terrorists, working with multiple U.S. and foreign military and government agencies.  He also worked at U.S. Special Operations Command as the Liaison Officer at the State Department Coordinator for Counterterrorism Office, and prior to joining the Army, the Bush Administration from 2003-2008. He has also worked for Booz-Allen-Hamilton.  He is the author of Shell Game: A Whistleblowing Report (CreateSpace, 2016). His website is: www.shellgamewhistleblower.com 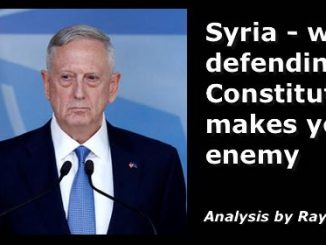 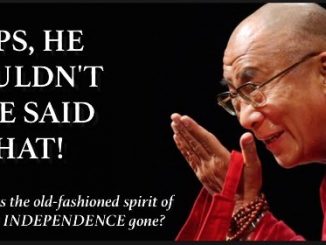 The Dalai Lama, White Europe & the Third World’s Drift from Pride to Parasitism 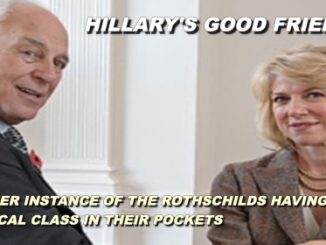