ER Editor: Readers may also be interested in this 2018 piece by RT titled NATO bases upgraded under anti-migrant guise, US nukes now stockpiled in Greece, which mentions some of the bases/ports Manlio Dinucci discusses in his article below.

We also recommend this piece by Paul Antonopoulos of InfoBrics from October, 2019 titled US-Greece-US: Lines Being Drawn by the U.S. in the Eastern Mediterranean, against Turkey and Russia? Of note:

Greek-U.S. relations have entered “a new era” with U.S. Secretary of State stating earlier this month that he has “come to Greece to expand the partnership that’s already at the best level it has ever been.” He followed up this statement in a tweet, saying “A strong and prosperous Greece is good for the Greek people and good for America.”

Why? Well during Pompeo’s trip to Greece, he finalized a new deal with the newly-elected Prime Minister Kyriakos Mitsotakis for the U.S. to open 3 new military bases in the Aegean country, but most importantly, a naval presence in the port in Alexandroupolis. The port is strategically located close to the Turkish-controlled Dardanelles that connects the Aegean/Mediterranean Seas via also the Bosporus with the Black Sea, and therefore Russia. Therefore, Pompeo is ecstatic as Greece has now been firmly placed in the U.S. camp and has willingly become a NATO stronghold in the eastern Mediterranean.

It is likely that the U.S. is also ‘rewarding’ Greece for its continued and strengthening economic ties with Israel. The Greece-Cyprus-Israel pipeline, GRISCY, has likely pleased Washington, especially as all three states are anti-Turkish and it helps further secure Israel’s place in the region…

Somewhere between the military axis of the Pentagon/NATO and the financial one comprising the IMF/ECB/EU, the impoverished Greeks have lost just about everything. 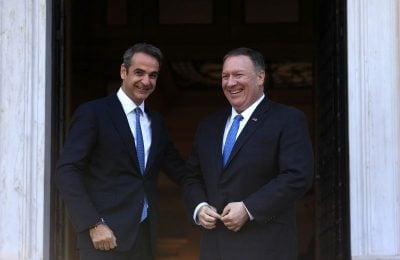 On 5 October 2019, in Athens, Greek Minister for Defence Nikólaos Panayotópoulos, and US Secretary of State Mike Pompeo (pictured with the Greek PM Kyriakos Mitsotakis) signed a “Mutual Defense Cooperation Agreement”.

The Greek Parliament ratified the Agreement, which grants the United States the use of all Greek military bases. They will be used by the US armed forces not only for the storage of weapons, supplies and training locations, but also for “emergency response” operations, which in reality means attack missions.

The Agreement was defined by Greek Minister for Defence Nikólaos Panayotópoulos as “advantageous for our national interests because it increases the importance of Greece in the context of US planning”. An importance that Greece has enjoyed for a long time – we only have to remember the bloody coup d’État perpetrated by the colonels, organised in 1967 in the context of the Stay-Behind operation directed by the CIA [1], and followed, here in Italy, with the period of massacres beginning with the attack at the Piazza Fontana in 1969.

During the same year, a detachment of the US Navy was transferred from the base in Sigonella, Sicily and settled in Greece, at Souda Bay on the island of Crete (see bottom of map below). Today, Souda Bay is one of the most important USA/NATO aero-naval bases in the Mediterranean, used for the wars in the Middle East and North Africa. The Pentagon will be investing in Souda Bay the additional sum of 6 million  Euros, which 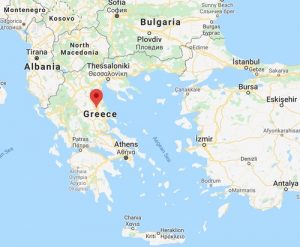 will be added to the 12 million it will be investing in Larissa (pictured on map), announced  Panagiotopoulos, presenting it as a great opportunity for Greece.

However, Prime Minister Kyriakos Mitsotakis (pictured above with Pompeo above) pointed out that Athens had already signed an agreement with the Pentagon for the modernisation of the F-16 fleet, which will cost Greece 1.5 billion dollars, and that Greece is also interested by the possibility of buying drones and F-35 fighters from the USA.

Greece is also notable for being, after Bulgaria, the European ally which for many years has given the highest percentage of its GDP (2.3%) to military expenditures.

The Agreement also guarantees that the USA will enjoy “unlimited use of the port of Alexandroupolis” (see map) [3], which is situated on the Aegean Sea close to the straits of the Dardanelles,  which link the Mediterranean to the Black Sea across Turkish territory, and therefore constitutes an essential passage for maritime transit, especially for Russia. Furthermore, the neighbouring territory of Eastern Thrace (the small European part of Turkey) is the point at which the gas pipeline Turk-Stream arrives from Russia via the Black Sea. 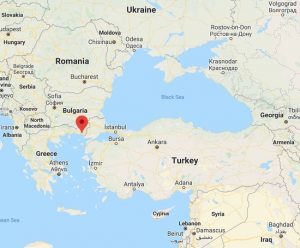 The “strategic investment” that Washington is already making in the port infrastructures aims at making Alexandroupolis one of the most important US military bases in the region, capable of blocking the access of Russian ships to the Mediterranean, and at the same time, hindering China which hopes to make Piraeus an important port of call on the New Silk Road.

“We are working with other democratic partners in the region to fend off evil actors like Russia and China  [4], particularly Russia, which is using energy as an instrument of its negative influence”, declared the US ambassador in Athens, Geoffrey Pyatt, emphasising that “Alexandroupolis has a crucial role to play in the energetic security and the stability of Europe”.

The “Mutual Defense Cooperation Agreement” with the USA is presented in this context, and was ratified by the Greek Parliament with 175 voices for, from the centre-right of the government (New Democracy and others) and 33 against (Communist Party and others), while 80 declared that they were “present” according to the formula of the US Congress, the equivalent of abstention, in use by the Greek Parliament. Syriza abstained, the Coalition of the Radical Left led by Aléxis Tsípras. First of all resigning from the government, now in the opposition, in a country which, after being obliged to sell off its own economy, is now selling off not only its military bases, but also what is left of its sovereignty.

This article appeared on the Italian web newspaper, Il Manifesto. 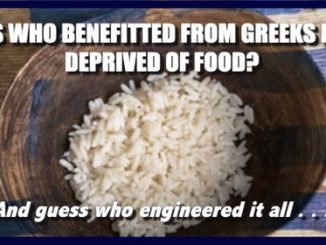 Democracy Is Not For Sale: The struggle for Food Sovereignty in the Age of Austerity in Greece 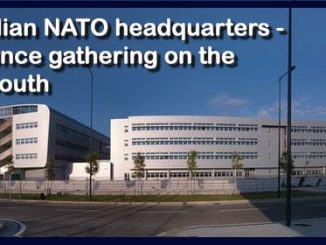