ER Editor: This is a little add-on to the economic topic below, which doesn’t discuss the EU decision to start reopening coal-fired energy plants. Coal. But sometimes you have to laugh (courtesy of Tom Luongo at his blog Gold Goats ‘n Guns, including the featured image, which we highly recommend reading): 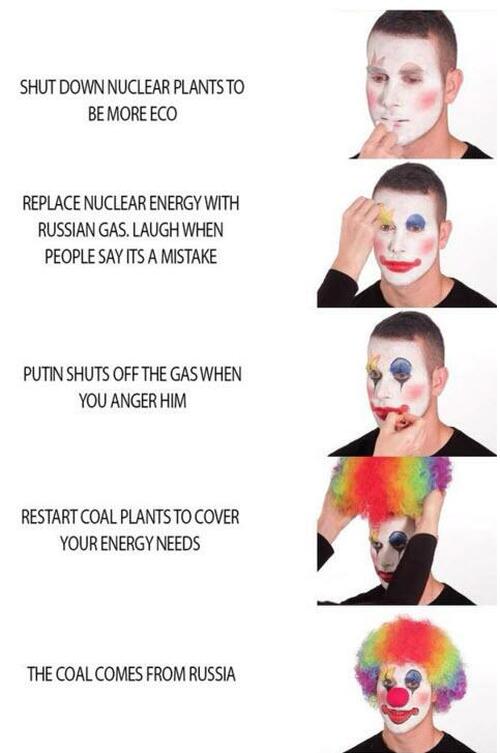 Economists on both sides of the Atlantic have recently urged their respective publics to prepare for a recession, and possibly a stagflationary crisis, amid surging inflation and soaring energy costs exacerbated by Washington and Brussels’ moves aimed at dramatically reducing dependence on Russian oil and gas.

The European Union’s plan to replace Russian gas before the end of the current year isn’t only “wildly optimistic,” but will add to the economic woes the bloc is already facing, London-headquartered macroeconomic forecasting consultancy TS Lombard has predicted.

In a recent report, TS Lombard researcher Christopher Granville calculated that the EU imported roughly 155 billion cubic meters (bcm) of natural gas from Russia in 2021, with all of Brussels’ proposed measures to replace it – including diversification of gas sources, heating efficiency measures, solar rooftops, biomethane, etc. account for the equivalent of about 102 bcm of gas, leaving about a third of supplies unaccounted for.

Amid EU efforts to source gas from alternative suppliers, including the US, Qatar and Azerbaijan, Granville’s report warned that the EU will be made to “pay more on average for its [non-Russian] oil and gas than its peers. Asian countries will buy more Russian oil at discounted prices… LNG imported by Europe from the US will cost [much] more than the price paid by US consumers owing to transit and liquefication/re-gasification costs.”

Russian officials and European energy company officials have estimated that Russian pipeline gas flowing to Europe has been 40 and 50 percent cheaper than American LNG, and less expensive than all other alternatives, owing to the shorter transit distances, larger volumes, and competitive pricing.

Last month, Russian President Vladimir Putin suggested that Moscow’s “Western colleagues” had “forgotten” the elementary laws of economics by trying to cut themselves off from Russian energy, predicting that the decision would turn Europe into the region with the highest energy costs in the world. This would undermine the EU’s competitiveness vis-à-vis other agglomerations, he said.

“Obviously, together with Russian energy resources, economic activity will also be leaving Europe for other regions of the world. Such an economic suicide is of course the internal affair of European countries. We must proceed pragmatically and primarily from our own economic interests,” Putin said.

Russian natural gas exports to Europe have declined precipitously in recent months as EU bloc countries search for alternatives. The drop accelerated earlier this month after Russian gas giant Gazprom indicated that it would be forced to reduce flows to Europe by up to 60 percent due to problems with the repair and maintenance of German-sourced turbines pumping gas through the Nord Stream 1 network (ER: An excuse according to many independent commentators). Germany and Denmark activated emergency measures as supplies dropped. Brussels accused Moscow of artificially throttling exports, with the European commission calling the emergency measures “blackmail.”

Takahide Kiuchi, an economist at the Tokyo-based Nomura Research Institute economic consultancy, warned in a research note Tuesday that if the crisis surrounding the Nord Stream 1 shortfall escalates, Brussels could add gas to the list of other Russian energy supplies that have been banned or semi-banned. This, he predicted, would push the Eurozone into a “sharp slowdown,” and plunge Germany into a recession. (ER: ‘If Russia persists in behaviour X, we in the EU will ban their product and hurt ourselves MORE’.)