ER Editor: So poorer nations become victims of the Great Power games played around energy supplies? Quelle surprise. Why aren’t the Woke people complaining about this?

The European Union is in the throes of an unprecedented energy crisis after taking steps to reduce dependence on Russian oil, natural gas, and coal to “punish” Moscow for its military operation in Ukraine. Skyrocketing energy prices and falling availability have sparked growing concerns about bloc countries’ fate come winter.

European countries are resolving the energy shortfall at home by outbidding developing nations for gas contracts, “increasing the misery of millions of people,” and threatening to plunge entire countries into chaos, Handelsblatt reports.

“While Europe fears supply shortages in winter, the energy crisis has already hit other parts of the world with full force. In Bangladesh’s capital Dhaka, power supply is not guaranteed even in hospitals. Young mothers report on how they torment themselves with their newborns during hot summer nights because even fans cannot be switched on,” Handelsblatt contributor Mathias Peer wrote.

A similar situation is seen in Pakistan, which has experienced “one power blackout after another,” and “also as a consequence of Europe’s failed energy policy,” Peer indicated.

The observer explained that the EU’s headlong rush to reduce dependence on Russian gas has triggered “massive turbulence on global energy markets,” with fleets of liquefied natural gas (LNG) tankers which ordinarily carry cargoes to Asia diverted to Europe instead.

“In the bidding competition for deliveries, states like Bangladesh, whose per capita income is 95 percent below that of Germany, have what has become a hopeless mission,” losing out on contracts, resulting in the paralysis of gas-fueled power plants “and massive problems for hundreds of millions of people in the affected countries,” Peer noted.

The Handelsblatt contributor suggested that it was “all too understandable” for the EU to try to reduce its dependence on Russian energy in the wake of the Ukraine crisis, and suggested that Europe is not to blame for the energy crisis.

“But Europe’s attempt to find alternatives must not be at the expense of uninvolved third countries. It is the EU’s responsibility to ensure that by solving its supply shortages, not further aggravate the crisis in other countries. Reducing consumption must therefore take priority over diverting resources from other parts of the world, and in this regard the European gas contingency plan is far from being ambitious enough,” the observer suggested.

Peer emphasized that a more “considerate approach” is needed to stop Brussels from continuing to “play into [Vladimir] Putin’s hands.”

“His propaganda – which states that it is not Russia but the West and its sanctions that are responsible for the current crisis – is already affecting many more people in emerging countries than Europe would like,” the columnist concluded.

The crisis in Ukraine, as well as US and EU moves to curb Russian energy and food exports to the West and other countries, have served to exacerbate the inflation, energy price crunch, and global hunger crises which have accumulated over the past two years after the breakdown of the world economy thanks to COVID. President Vladimir Putin has characterized Brussels’ push to wean itself off Russian energy as “suicidal,” and warned that higher energy costs would collapse the bloc’s economic competitiveness.

The energy crisis has prompted European countries to begin a search for new sources of energy in Africa, including Algeria, Nigeria, and Tanzania. However, even before the escalation of the Ukraine crisis, some African leaders have resisted the new European energy “scramble for Africa,” with Algeria shutting off the taps to Spain over Madrid’s support for Morocco in the dispute over Western Sahara, and Nigerian Environment Minister Mohammad Mahmood Abubakar accusing developed nations of spending years starving Africa’s natural gas projects of funds on the grounds that they contribute to climate change. 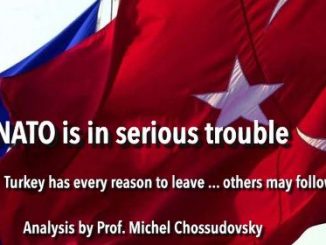 Has Ukraine Ordered EU-Bound Gas To Be Shut Off?