With great fanfare at the end of June, the 19 EU Eurozone finance ministers announced the end to the eight-year-long Greek debt crisis that brought the entire Euro structure into its deepest crisis to date. The exercise is a deep deception. The EU ministers refused to write off any Greek state debt. Instead they did a destructive interest capitalization of the existing debt, similar to what Washington did to Latin America in the 1980’s. What in fact is going on we might justifiably ask.

Under the new scheme, the due date for loan repayments will be extended by 10 years. With loan write-offs off the table, Eurozone ministers agreed to extend maturities by 10 years on major parts of its total debt obligations, on a public debt still equal to 180% of GDP or €340 billion, despite cutbacks and reforms. The EU loaned an added 15 billion euros ($17.5 billion) in new debt to “ease” the exit.

As a part of the agreement, the IMF and EU-friendly Alexis Tsipras government has agreed to even more austerity in the form of more taxes and more pension cuts by year end. Greece already has the highest official unemployment in the entire EU after 8 years of IMF and EU mandated austerity. Since onset of the crisis, owing to strict Brüning-like austerity demands of Germany and the EU, the economy has contracted by 25%. Unemployment is at 20% and youth unemployment above 40%. Pensions and social welfare programs have been cut by fully 70%.

Another day poorer and deeper in debt

Under demands by the EU, ECB and IMF, the aptly-named troika, Greece has passed anti-union laws suspending comprehensive collective bargaining, all but banned industrial strike action and enabling mass dismissals. This national wage dumping, decreed from outside, is complemented by the sale of the Greek family silver, an extensive privatization program from electricity supply to infrastructure – airports, harbors, public services such as hospitals, schools and public transport.

The money, however, is not going to be invested in needed infrastructure to make more needed jobs to increase the productive tax base. It is going to repay past loans to the European Central Bank (ECB) and the IMF. Part of the terms of the loans are that the Greek government pledges to permanently achieve higher income than expenses – thus attain a “primary budget surplus” of 3.5% of GDP by 2022 and 2% through to 2060. Greece and its economy have been condemned into permanent debt trap servitude. Not even Germany manages such a feat. 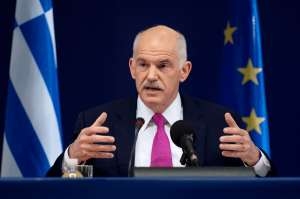 In October 2009 in the depth of the global financial crisis Greek state debt was 129% of GDP. At that point the Washington-friendly PASOK party of Prime Minister George Papandreou (pictured) ousted the conservative Karamanlis government and then “revealed” the existence of some €5.4 billion of concealed debt deferred by Goldman Sachs’ unconventional swaps, as well as taking what later were revealed as illegal steps to exaggerate the Greek state deficit in order to provoke a crisis and bailout of the corrupt Greek banks and their French, German and Dutch creditors by making the state, i.e. taxpayers, bail out the insolvent big banks.

At that point, the European Central Bank under France’s Jean-Claude Trichet refused to calm matters by buying Greek government debt and stopping the speculation that had driven interest rates for Greek state Euro-denominated bonds to an unpayable 40%. The Greek government was blamed for the crisis and the EU, ECB and IMF, the Troika took over the economy.

As Eric Toussaint of the Coalition for the Abolition of Illegitimacy Debt pointed out in a detailed study of the Greek crisis,

“Papandreou dramatized the public debt and the deficit in order to justify an external intervention aimed at bringing in sufficient capital to face the situation the banks were in. The Papandreou government falsified the statistics on Greece’s debt – not in order to reduce it, as the prevailing narrative claims, but in fact to increase it. He wanted to spare the foreign (principally French and German) banks heavy losses and protect the private shareholders and top executives of the Greek banks.” 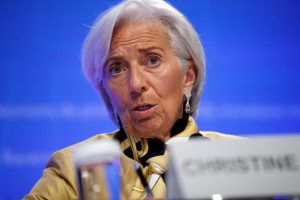 To shift the blame and burden from the irresponsible Greek and foreign banks to the Greek government, IMF General Manager Christine Lagarde, also French, deliberately lied that the Greek State supposedly gave Greeks the benefit of a generous system of social protection in spite of the fact that they were paying no taxes, neglecting to point out that wage earners and retired persons in Greece have their taxes withheld at source.

The Papandreou government in late 2009 revealed the existence of Goldman Sachs’ “currency off-market swap agreements” with the previous Greek government, instruments which they claimed allowed it to conceal the size of its public deficit in order to join the Eurozone in 2002. The Greek crisis was full-blown.

International hedge funds and foreign bankers and ECB did the rest. It is estimated that at least 77% of the rescue money has gone directly or indirectly into the European financial sector, banks that already received €670bn of direct state support at the start of the crisis. In other words. By one calculation about €231 billion did not at all benefit Greek society but the international financial sector. Uninformed EU citizens were told the money was to “solve the Greek crisis.” It was a lie. It was to bail out international banks.

Despite €300 billion of subsequent “aid” to deal with the Greek state crisis, today’s debt is a staggering 180% of GDP, far more than at the onset. The only ones to gain have been the German Treasury, which has earned almost €3 billion on its Greek bonds, and the creditor big banks, especially in France, Germany and Belgium, and hedge fund speculators.

As of 2016, a total of €47 billion of money funneled from the EU, IMF and ECB went via a Greek government fund, to recapitalize the largest four Greek banks, on the argument that saving the private banks, instead of nationalizing and cleaning them up, was essential to the economy. What in fact took place was that a group of international hedge funds like Paulson and other foreign investors were able to buy 74% of the share ownership of those recapitalized banks for a mere €5.1 billion. Greek investors were prohibited from investing. 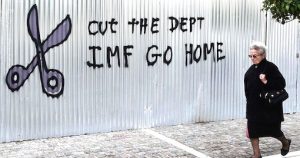 “But this was not a bail-out. Greece was never bailed out. Nor were the rest of Europe’s swine—or PIIGS as Portugal, Ireland, Italy, Greece and Spain became collectively branded. Greece’s bail-out, then Ireland’s, then Portugal’s, then Spain’s were rescue packages for, primarily, French and German banks.”

Eric Toussaint of the Coalition for the Abolition of Illegitimacy Debt, who was given a confidential IMF document on the Greek “bailout” stated,

“The documents proved that the decision by the IMF on 9 May 2010 to lend €30 billion to Greece (32 times the sum normally available to the country) was, as clearly expressed by several executive directors, primarily aimed at getting French and German banks out of trouble.”

He added that the IMF money was used to repay French, German and Dutch banks that between them held more than 70% of Greek debt at the time the decision was made.

Forcing down Greek wages, cutting public support for education and health, privatizing essential public services and slashing pensions will never make the Greek economy dynamic. But then, it never was intended to do so. The real aim, as is becoming clear, is the end of Greece as a sovereign nation-state, a prime goal of the faceless powers behind the EU in Brussels. As Germany learned in the crisis of 1931, under Chancellor Heinrich Brüning, austerity leads only to worsening of conditions, to rising unemployment, poverty and worse. The latest act in the Greek debt tragedy, more accurately the rape of Greece, solves nothing for Greece or its people. But it keeps the system of debt servitude intact a bit longer. 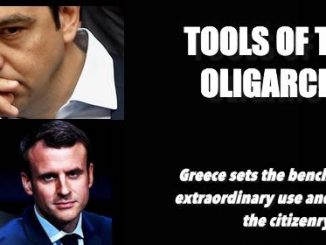 On France, Greece and the Never Ending Elite Rule 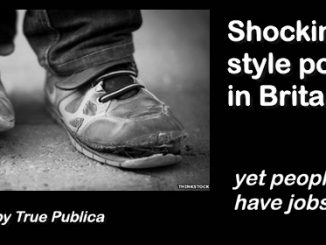 The New Poverty: How austerity works to impoverish millions and leave millions more close to crisis