There were 5,700 new cases of female genital mutilation recorded in England in 2015-16, the first annual statistics show.

The figures, published on Thursday by the Health and Social Care Information Centre and covering the period of April 2015 to March 2016, show that in 18 cases the practice had been undertaken in the UK.

The age group for which FGM was most common was five- to nine-year-olds, accounting for 43% of the total number of cases where the age at the time of being cut was known.

In all there were 8,660 attendances where FGM was identified or a medical procedure for the practice was undertaken, according to the statistics, the first to be published since the government introduced compulsory reporting for NHS trusts and GP surgeries.

The Royal College of Nursing said more had to be done to end the practice, which has been illegal in the UK since 1985.

Carmel Bagness, the RCN’s professional lead for midwifery and women’s health, said: “Collecting and publishing these statistics is an important part of the fight against FGM. They can be used to better plan local services to meet the needs of women and girls, and to target training for nurses and midwives.

“What these statistics show is that there is still a lot of work to do to eradicate this abuse. A lot has been achieved in the past few years, but these efforts must continue for as long as there are still women and girls subjected to this criminal abuse.” 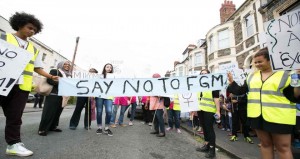 Campaigners at an anti-FGM march in Bristol. There are estimated to be more than 20,000 British girls a year at risk of FGM. Photograph: Chris Cronin

The vast majority (87%) of women whose pregnancy status was known were pregnant at the time of attendance, suggesting that this was what led to FGM being self-reported or identified by a medical professional. Self-reporting accounted for 73% of FGM identification, where the identification method was known.

More than half of all cases – 52% of newly recorded cases and 58% of total attendances – related to women and girls from the London NHS commissioning region.

A national campaign by the Guardian, the Bristol-based charity Integrate and Change.org led to compulsory training for public sector workers to help teachers, doctors and social workers identify and assist girls at risk. The Department for Education has written to schools about the dangers of FGM.

More than 20,000 girls a year are thought to be at risk of FGM in the UK. Medical groups, trade unions and human rights organisations estimate that there are 66,000 victims of the practice in England and Wales.

The US/EU trade deal TTIP is back threatening consumer safety 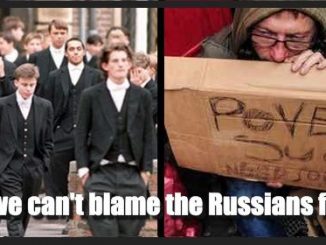 Britain’s enemy not Russia but its own ruling class, UN report confirms