ER Editor: See also this recent, interesting Sputnik News piece titled Chris Williamson Announces He Won Court Costs Against Labour Party. Former Labour MP Chris Williamson was ousted from the party for alleged anti-semitism, and now runs as an independent. No substance has ever been found for alleged claims of anti-semitism within the Labour Party.

For an indication of how much the Labour Party is actually in bed with the Israel Lobby quietly behind the scenes, and even Corbyn’s own group, Momentum, we highly recommend Gilad Atzmon’s recent piece for the way the Labour Party, in conjunction with UK Jewish groups, has systematically hounded him, trying to stop him from making a living. See The Most Dangerous Political Party in Europe? Atzmon, like Williamson, refused to publicize his historical problems with Labour during the recent election campaign out of respect for the Labour Party. Of note:

For the past three years the Labour Party has turned against its best and most valuable members: it suspended and expelled its own members for telling the truth. In some cases Labour even targeted private citizens, all in the hope that these acts would appease its detractors within the Jewish community’s leadership. I have kept relatively quiet about all this; I didn’t want to be the person who revealed the full extent of the authoritarian tactics undertaken by Corbyn’s Labour nor did I want any responsibility for Labour’s political demise: this job was left to Britain’s Jewish institutions, the Jewish Chronicle, the JLM, the Chief Rabbi, the BOD and the CAA, who have all viciously smeared Corbyn and on a daily basis since the day he was elected to lead the Party.

However, now that Labour has been humiliated and is allegedly ‘seeking reflection,’ this is the right time for me to expose the tyrannical horrors this sycophantic party inflicted on its members and supporters. And, as you may imagine, I have a personal story to tell.

What is clear beyond doubt is that Corbyn’s Labour Party was compiling ‘incriminating’ evidence against its own members. The party has engaged in intensive surveillance of its own members, searching personal and intimate communications and digging into personal social media.

A former Labour member of the UK’s Parliament, Williamson was pushed out of the party earlier this year.

The legal fighting fund is being established thanks to a crowdfunding campaign and a legal victory by Williamson and his supporters.

“We’ll keep defending our comrades by any means necessary,” Williamson promised in a video posted to social media on Tuesday.

In October, Williamson won a High Court victory against his “re-suspension” by Labour Party bureaucrats in June.

On Tuesday, Williamson announced that the court had awarded him back the vast majority of his legal costs against the Labour Party. 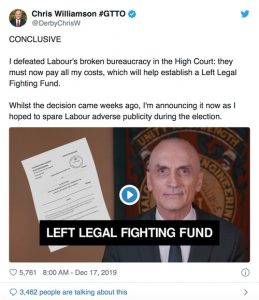 He’d only been able to fund those costs thanks to the generosity of ordinary Labour activists, who donated in a crowdfunder to meet most of the $98,000 required to fund the legal action.

Now that most of their donations will be recouped, they will be plowed back into defending others on the left similarly attacked and smeared as anti-Semitic.

Williamson was hounded out of the party in February, when he was first suspended.

A Labour disciplinary panel let him back into the party in June with a warning. But after outrage by Israel lobby groups and the media, he was “re-suspended” days later – against the party’s own rules.

It was that re-suspension which was ruled illegal by the High Court in October.

In 2017, Williamson, a supporter of Labour leader Jeremy Corbyn, condemned the “lies and dirty tricks” around the “anti-Semitism smears” – becoming the only MP to do so.

After that he was made a prime target by the Israel lobby.

“We’ve seen manufactured anti-Semitism allegations as part of a concerted smear campaign,” Williamson said in his latest video on Tuesday.

“A hostile foreign government has mobilized its assets in the UK – which Israeli diplomats call their ‘power-multiplier’ – in an attempt to prevent a Corbyn-led Labour government,” he said.

This long running campaign against Corbyn by Israel and its supporters in the UK was successful last week.

In his video, Williamson criticized Labour for failing to fight “interference in our election and calling out this outrageous assault on our democracy” saying the party had “internalized the narrative promoted by the far-right Israeli government.”

Israel and its UK assets “sought to prevent dozens of anti-imperialist socialists from standing for Labour,” Williamson said.

Many Labour activists who sought to run for parliament this year were either forced to revoke previously anti-Zionist statements, or be rejected.

In October, working class socialist and Palestine activist Colin Monehen was removed from a shortlist of Labour candidates for the election.

As has been endemic since 2015, he had been smeared with “anti-Semitism.”

Netanyahu Is Back Yet Again – Israel Will Become Much Bigger 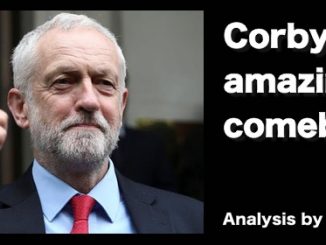