ER Editor: The publication date of the Italian article below is June 19, 2020. Professor Giuseppe Remuzzi is a nephrologist and, since 2018, the director of the Institute of Pharmacological Research Mario Negri in Milan, where the virus outbreak has been far worse than other regions of Italy. Milan is the principal city in the Lombardy region of northern Italy, referred to below.

The essence of Prof. Remuzzi’s interview below is that new ‘positive’ cases of COVID-19 have a very low level of viral load, which means they are not contagious to others and not capable of creating infected cells in the carriers, a qualification to ‘positive case’ that is never mentioned by the MSM.

We also remind readers of a report we published on June 2 which gave ICU head at San Raffaele hospital in Milan, Dr. Alberto Zangrillo‘s verdict on the virus and the dramatic weakening it has undergone between March and May: Italy: The Coronavirus is Far Less Capable of Replication – It’s a ‘Different Disease’.

Below Professor Remuzzi describes the virus’ timeline and character thus: “…if the virus has been circulating for months and then explodes like it did in Lombardy…”. This fits with articles we’ve published which show the virus to have possibly been circulating since at least October (depending on the region/country), then producing a large number of infections during February and March (UK peak number of deaths was in early April) before considerably weakening thereafter.

We’re also drawing attention to a Daily Mail article of two days ago, titled Coronavirus is weakening, could die out on its own without a vaccine and patients now survive infections that would have killed them at start of the pandemic, claims Italian expert. Professor Matteo Bassetti, chief of infectious diseases at the General Hospital of San Martino in Genoa, about 100 miles from Milan, also claims that the virus has changed considerably:

He said: ‘It was like an aggressive tiger in March and April but now it’s like a wild cat. Even elderly patients, aged 80 or 90, are now sitting up in bed and they are breathing without help. The same patients would have died in two or three days before.’

Professor Bassetti said: ‘The clinical impression I have is that the virus is changing in severity.

‘In March and early April the patterns were completely different. People were coming to the emergency department with a very difficult to manage illness and they needed oxygen and ventilation, some developed pneumonia.

‘Now, in the past four weeks, the picture has completely changed in terms of of patterns.

‘There could be a lower viral load in the respiratory tract, probably due to a genetic mutation in the virus which has not yet been demonstrated scientifically.’

And now there are ANY restrictions on people’s movements and lives because … ?

Coronavirus, Remuzzi: “New positives are not contagious, stop the fear.”

The director of the Institute of Pharmacological Research Mario Negri and the swab study: “The viral load has become very low”.

“But for God’s sake. Rather, the Higher Institute of Health and the government must realize how much and how much the situation has changed since 20 February, now far away. And they must communicate accordingly. Otherwise, they contribute, perhaps involuntarily, to spreading unjustified fear”.

Even with a daily average of 70 to 80% of new infections concentrated in one region?
“You have to explain what’s happening to people, who rightly get scared when they hear that data. Here at the Mario Negri Institute we are about to publish a study, which contains some useful information to understand, at least I hope so”.

What is it about?
“A brief premise, I hope not too boring, on how tampons work (ER: we believe ‘tampons’ are swabs). The polymerase chain reaction (PCR) technique is used to search for the virus, able to amplify some specific DNA fragments in a biological sample”.

So far so good.
“For Covid-19, this is how it works. The genome of the coronavirus present on the swabs, i.e. the RNA, is transcribed to DNA and amplified using the PCR technique, which greatly increases the genetic starting material. The higher the content on the DNA swab, i.e. the more virus, the less it needs to be amplified.

Your research?
“We conducted a study of 133 researchers at Mario Negri and 298 employees at Brembo (431). In all, there were 40 cases of positive swabs. But the positivity of these swabs emerged only with very high amplification cycles, between 34 and 38 cycles, corresponding to 35,000-38,000 copies of viral RNA”.

What does that mean?
“That they are cases of positivity with a very low viral load, not contagious. We call them contagious, but they’re positive for tamponade. Commenting on those data that are given every day is useless because they are positives that have no relapse in real life”.

How much do we have to amplify to have a contagious positivity?
“Under a hundred thousand copies of RNA, there is no substantial risk of contagion, according to a work just published by Nature and confirmed by several other studies. So, none of “our” 40 positives would be contagious. This means that the number of new cases may involve people who have so little RNA in their swab that they cannot even infect cells. In contact with the RNA of the real positives, those in March and early April, the cells died within hours.

Be patient, but a study by Mario Negri does not make spring.
“In fact. A study by the Center for Disease Prevention of Korea on 285 asymptomatic positive people traced 790 of them to direct contact. How many new positives? Zero. And I’ll save you other studies that go that way.”

I’m sorry, they used to just count tampons, and now they don’t?
“Now we know more. The ISS and the government must qualify the new positivity, or allow the laboratories to do so, explaining to people that a positivity of less than a hundred thousand copies is not contagious, so it makes no sense to stay at home, isolate, just as it is no longer too useful to make tracks that were fine at the beginning of the epidemic”.

Don’t you think Vo’ Euganeo and Veneto worked well?
“And in fact I think Professor Crisanti did a great job, acting immediately and decisively. That method, double swab and tracking, is good for a small outbreak. But if the virus has been circulating for months and then explodes like it did in Lombardy, that method risks becoming counterproductive, unless we have a crazy Wuhan-type organization at our disposal”.

Are you saying that the current swab-based system is wrong?
“Not at all. But it’s going ahead in a bureaucratic way with rules that don’t take into account what’s emerging from the scientific literature”.

You yourself told me that it takes at least a year for the scientific community and governments to implement the results of studies.
“In this specific case it would be better to speed up, otherwise an unjustified panic is created”.

How do you explain that the vast majority of new cases are only registered in one region?
“There has been an enormous amount of sick people, the virus has turned around a lot, and these are the remnants of that spread”.

Doesn’t it worry you that even yesterday 216 new cases were registered in Lombardy out of 333 throughout Italy?
“No, if they are positive in the same way as those in our research, that is, with a positivity ridiculously lower than one hundred thousand. Because they can’t infect the others”.

And if they are not?
“There’s only one way to find out. You have to say how much Covid-19 is in the new positivity. That’s what I’m asking. The virus is the same, of course. But for reasons no one knows, and maybe that’s why it’s so hard to admit it, there’s little, much less of it in those swabs than before. And that has to be taken into account.”

You’re playing the Lombardy defense attorney?
“I have no reason to do so. Both because of my political sensitivity and my professional history, both of which are far removed from the principles underlying Lombardy’s health care. I believe I am also known for having opposed that model, based as it was on free choice and market, like no other. But I am also a doctor, I have a duty to say things as they are”. 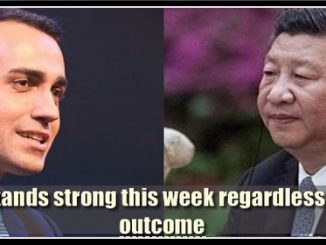 Italy Courting China is a Masterstroke of Chaos