For billions of people, the Groucho Marx rule applies when talking about Davos. This is the exclusive club, which meets in the luxury Swiss resort each year to discuss the global business environment.

Groucho, of course, has been immortalized along with the rest of the Marx Brothers in the zany Hollywood movies of the 1930s, such as A Night at the Opera, A Day at the Races and Animal Crackers.

In one quick-fire response, he joked: “I sent the club a wire stating, ‘Please accept my resignation. I don’t want to belong to any club that will accept me as a member’.”

Well, to start off with, those billions of people would not get past the bouncers because the self-defined World Economic Forum is about exclusion. Yet even if, by divine design, they were handed free passes, what would be the point?

The austerity mantra holds sway over large swathes of Europe. The US remains mired in the fiscal cliff maelstrom and the Japanese are about to unleash an economic tsunami – devaluation of the yen at all costs.

On the other hand, growth does apply to parts of the BRICS (Brazil, Russia, India, China and South Africa) group of emerging nations and selected members of Next 11.

Certainly, Indonesia, Mexico, the Philippines, Turkey, South Korea and Vietnam fall into this category in N-11, a BRICS-like organization.

So, what is the point of spending the GDP of a sub-Saharan country trekking to the Alps to Davos for a mere blabber fest, when basic membership plus access to private sessions at the summit cost a whopping US$245,000?

For instance, the slopes of Jackson Hole, where the annual central bank symposium is held in Wyoming, are way cooler.

In comparison, Davos is essentially double-dip land. On one side, we have ‘Bad for Labor’, with millions in the West thrown into an unemployment hell or suffering from a wages freeze. On the other side, we have ‘Good for Capital’, with companies flush with cash.

Yet the result is uncertainty, all over again. Quite simply, more “robust” companies are just not investing. Why? Because there is no demand. That is the “price” of the austerity mantra, and there is no evidence that the business, financial and government suits in Davos will address the drama.

After all, since the 1990s, the summit has always been about hardcore globalization and its prime spin-off – the absolute marketization of everything in life.

To get to the bottom of it, CEOs, bankers and techno-bureaucrats would have to engage in an in-depth discussion of hardcore neoliberalism.

To do that, they would have to bring in David Harvey, the distinguished professor of anthropology and geography at the Graduate Center of the City University of New York, where he has been teaching Karl Marx’s “Capital: Critique of Political Economy” for more than 40 years.

They would have to hold global banking to account. They would also have to consign austerity to the dustbin of history, and level the playing field between capital and labor. Of course, that will not happen.

Still, this year’s Davos theme is “Resilient Dynamism.” As a definition of the current woes of turbo-capitalism, a five-year-old in a favela, or slum, in Rio could come up with something more meaningful.

But then, Davos is a one-trick pony. “Resilience” remains a euphemism for the ever-expanding markets and low pay for workers syndrome. In a nutshell, globalization driven by huge multinational corporations.

We should scrap “Resilience” as the name of their game is “Inequality.” Davos, of course, does not do “inequality.”

In a study released by UC Berkeley, the wealth of the top 1% of Americans accrued by 11.6% in 2010, while for the other 99% it was a mere 0.2%. This is what is at the heart of hardcore neoliberalism and capitalist.

Davos should be discussing how a key segment of elites concocted the Wall Street-provoked financial crash. That was only ‘virtual’ business, but it was not ‘virtual’ national governments that had to intervene afterward to pick up the bill and bail out the banks.

No, I am afraid “Resilient Dynamism” will not do for Davos. But it is a good definition of China. While European and American elites accrue their capital to contain Beijing’s advance in Africa and Asia, China’s interventionism is of the business kind. It is a case of building roads, not wars.

Still, the question Davos refuses to ask remains: Why is it easier to imagine the total destruction of mankind, from nuclear war to a climate catastrophe, than to work on changing the system of relations spawned by capitalism?

Stay tuned for that one.

ER recommends other articles by Strategic Culture Foundation, and Asia Times where this article originally appeared 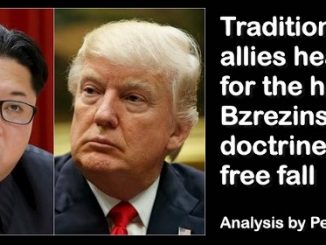 Is North Korea Showing that the Emperor is Naked?