Can We Separate the Jews from Apartheid State of Israel?

Criticize Israel and you will be labeled anti-Semite. Talk about the 125 million Muslims, Christians, Hindus, Animist and Atheists who died during the Second World War, and you’ll be called a Holocaust denier because you intentionally omitted the special deaths of the Jews – “6 million” of them.

So, how special are these people really?

During the massive bombings of Gaza back in 2008-2009, the Jews were watching in awe as their US manufactured and paid for warplanes were diving for the kill, and reduced the buildings in the enclave into rubbles. 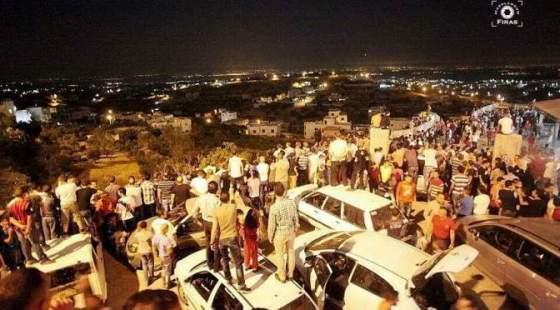 The smoke from phosphorous shells would continue to burn days after. Trillions of US taxpayers’ money well spent. But that’s anti-Semitic.

More are still coming in for the Special Jews from governments of the first black president and the first anti-establishment president, post-JFK era. The superior Jews are already in place where they are supposed to be.

So, Apartheid Israel has no other choice but to continue to exercise exceptionality over their Palestinian subjects by shooting them on the streets, on a whim. The State of Israel will, of course from time to time, succumb to global pressure and must punish one of their own, ever so lightly.

Jewish supremacists, on the other hand, would rather hold a barbecue party just outside where the Palestinian prisoners are in a hunger strike!

There is a major civil rights catastrophe underway in Israel, with increasing human rights abuses being committed against Palestinian prisoners, many of whom are mere children, political commentator Mo Ansar told RT.

On Friday, Israel’s Border Police fired stun grenades at Palestinian protesters in Bethlehem, who had come out in support of thousands of Palestinian hunger-strikers in Israeli prisons.

Demonstrators were also calling on Israel to end the imprisonment of prisoners without trial. Amnesty International says at least 500 people are being held in administrative detention without charge or trial.

Earlier, activists from an Israeli right-wing movement had thrown a free barbecue outside a military prison in the West Bank, where Palestinian inmates are currently taking part in a mass hunger strike. 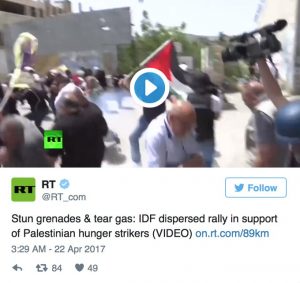 RT:  What do you make of the actions of the right-wing group that threw barbeques near the prisons? It makes the lives of the hunger-strikers more difficult, doesn’t it?

Mo Ansar: Yes it does. [Marwan] Barghouti, who has been in Israeli prisons for some 15 years, who triggered the hunger strike originally, said that “hunger striking is the most peaceful form of resistance available. It inflicts pain solely on those who participate and on their loved ones, in the hopes that their empty stomachs and their sacrifice will help the message resonate beyond the confines of their dark cells.” And, in response to this, Israeli activists thought it would be nice and funny and clever to inflict more cruelty on these people who are starving to death in prisons by wafting smells and aromas, cooking in front of them, mocking them.  It is abhorrent. There is a major civil rights and human rights catastrophe in Israel with increasing human rights abuses against Palestinian prisoners. 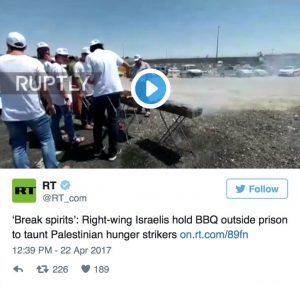 Barghouti wrote an op-ed in the New York Times just recently where he talked about deaths, tortures, inhuman treatment, removal of family visitation rights; the fact that lawyers are unable to defend their clients. Let’s remember some of these clients are 10-, 12-, 14- year-old kids; kids who have been imprisoned for what? Throwing stones at tanks, throwing stones at armed military police? So there are major questions being asked by Amnesty [International] and others around the world about the increasing human rights violations against these Palestinian prisoners. We need a solution.

RT:  Do you think more pressure needs to be put on the Israeli authorities to improve conditions?

MA: I think conditions are going to have to improve. The difficulty we have is that we can’t take the treatment of Palestinian prisoners in isolation. When you look, for example, on treatment of Israel with Gaza, Gaza is effectively a 25-mile by four-mile strip of land [40 x 6.5km]; 1.6 million people are living there. It is an open refugee camp. Israel has a particularly harsh, some would go so far as calling it ethnic cleansing, which has been going on in Palestine over the last 60 years. Even prisoners who were due to be released after the Oslo Accords haven’t been released. We’ve got something like about 20-odd journalists that are in Israeli prisons at the minute. We had outrage when we had freedom of speech and press freedom being curtailed around the world.  We’ve had outrage when we’ve had prisoners who were journalists in Egypt and in other totalitarian states. So it is odd that we’re not seeing more of an outcry about journalists who are being imprisoned as part of this raft of human rights violations in Palestine.

As they said, we cannot lump all “Israelites” together because some of them are moderates, secular and don’t really care about racism. Not to mention the recent discovery that the Askhenazi Jews are actually of Khazarian descent who earlier converted to Judaism to hide their sordid history.

But isn’t their collective silence an unspoken consent to their government’s action?

Or, that their protest actions were not enough to influence the character of the State of Israel?

Because, in the final analysis, we can only evaluate and judge from the actual results of such actions, and not with what has been said, or any of their abstract intentions.

Does the term ‘apartheid’ fit Israel? Of course it does.

… “Apartheid” isn’t just a term of insult; it’s a word with a very specific legal meaning, as defined by the International Convention on the Suppression and Punishment of the Crime of Apartheid, adopted by the U.N. General Assembly in 1973 and ratified by most United Nations member states (Israel and the United States are exceptions, to their shame).

According to Article II of that convention, the term applies to acts “committed for the purpose of establishing and maintaining domination by one racial group of persons over any other racial group of persons and systematically oppressing them.” Denying those others the right to life and liberty, subjecting them to arbitrary arrest, expropriating their property, depriving them of the right to leave and return to their country or the right to freedom of movement and of residence, creating separate reserves and ghettos for the members of different racial groups, preventing mixed marriages — these are all examples of the crime of apartheid specifically mentioned in the convention.

Seeing the reference to racial groups here, some people might think of race in a putatively biological sense or as a matter of skin color. That is a rather simplistic (and dated) way of thinking about racial identity. More to the point, however, the operative definition of “racial identity” is provided in the 1965 International Convention on the Elimination of All Forms of Racial Discrimination (to which Israel is a signatory), on which the apartheid convention explicitly draws.

There, the term “racial discrimination” is defined as “any distinction, exclusion, restriction or preference based on race, color, descent, or national or ethnic origin which has the purpose or effect of nullifying or impairing the recognition, enjoyment or exercise, on an equal footing, of human rights and fundamental freedoms in the political, economic, social, cultural or any other field of public life.”

A few basic facts are now in order.

The Jewish state (for so it identifies itself, after all) maintains a system of formal and informal housing segregation both in Israel and in the occupied territories. It’s obvious, of course, that Jewish settlements in the West Bank aren’t exactly bursting with Palestinians. In Israel itself, however, hundreds of communities have been established for Jewish residents on land expropriated from Palestinians, in which segregation is maintained, for example, by admissions committees empowered to use ethnic criteria long since banned in the United States, or by the inability of Palestinian citizens to access land held exclusively for the Jewish people by the state-sanctioned Jewish National Fund.

And so it goes in all domains of life, from birth to death: a systematic, vigilantly policed separation of the two populations.

Jewish residents of the occupied territories enjoy various rights and privileges denied to their Palestinian neighbors. While the former enjoy the protections of Israeli civil law, the latter are subject to the harsh provisions of military law. So, while their Jewish neighbors come and go freely, West Bank Palestinians are subject to arbitrary arrest and detention, and to the denial of freedom of movement; they are frequently barred from access to educational or healthcare facilities, Christian and Muslim sites for religious worship, and so on.

Meanwhile, Palestinian citizens of Israel must contend with about 50 state laws and bills that, according to the Palestinian-Israeli human rights organization Adalah, either privilege Jews or directly discriminate against the Palestinian minority. One of the key components of Israel’s nationality law, the Law of Return, for example, applies to Jews only, and excludes Palestinians, including Palestinians born in what is now the state of Israel. While Jewish citizens can move back and forth without interdiction, Israeli law expressly bars Palestinian citizens from bringing spouses from the occupied territories to live with them in Israel.

The educational systems for the two populations in Israel (not to mention the occupied territories) are kept largely separate and unequal. While overcrowded Palestinian schools in Israel crumble, Jewish students are given access to more resources and curricular options.

It is not legally possible in Israel for a Jewish citizen to marry a non-Jewish citizen. And a web of laws, regulations and military orders governing what kind of people can live in which particular spaces makes mixed marriages within the occupied territories, or across the pre-1967 border between Israel and the occupied territories, all but impossible.

And so it goes in all domains of life, from birth to death: a systematic, vigilantly policed separation of the two populations and utter contempt for the principle of equality. One group — stripped of property and rights, expelled, humiliated, punished, demolished, imprisoned and at times driven to the edge of starvation (down to the meticulously calculated last calorie) — has withered. The other group — its freedom of movement and of development not merely unrestricted but actively encouraged — has flourished, and its religious and cultural symbols adorn the regalia of the state and are emblazoned on the state flag.

The question is not whether the term “apartheid” applies here. It is why it should cause such an outcry when it is used.

Saree Makdisi, a professor of English and comparative literature at UCLA, is the author of “Palestine Inside Out: An Everyday Occupation.”

Apartheid Israel should provoke an outcry because that’s the whole idea. If the global population is focused on evil Israel, then they won’t have the time to see how their bank accounts are depleted systematically, bit by bit over time.

So, we would be remiss in our task indeed if we did not close this article with the bigger picture that the Jews, just like the Russians, the North Koreans, President Assad, the Atheists, the climate change marchers, revisionists, and tarot readers, are all part of the multi-layered dialectics between bogeymen, who may only differ from which side they are fighting on, but they are all useful distractions in the larger scheme of things, just the same.

The Rothschild’s Khazarian Mafia, the Jesuits and its Knights of Malta legionnaires, Freemasonic lodges and their fraternity clubs down the line, all united in their common vested interests, are all properly served, well compensated and recognized, as people scramble only for crumbs ‘neath their tables.

The status quo must be preserved, at all cost. 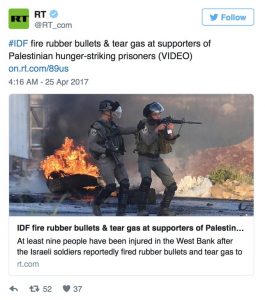 Our limited choices are between playing the hunger games, supplant the current order by revolting from within, or leave it all behind.