Though nothing seems to move fast in Israeli politics – after four national votes in two years and multiple failed attempts at forming a governing coalition – Israel’s longest serving prime minister is finally out for good.

On Sunday Israel’s parliament voted to approve the new coalition government under Naftali Bennet and Yair Lapid, with Bennet being sworn in as prime minister following the narrow 60-59 vote in Knesset. Netanyahu’s 12-years in office comes to a close and he now faces criminal charges – no longer under the protection and legal immunity afforded by the PM’s office – over prior corruption cases.

But to nobody’s surprise, Bennett’s first words as newly sworn in unity leader signaled there will be little change in Israeli foreign policy:

“Israel will not allow Iran to arm itself with nuclear weapons,” Bennett said, vowing to maintain Netanyahu’s confrontational policy. “Israel will not be a party to the agreement and will continue to preserve full freedom of action.”

Bennett nevertheless thanked President Joe Biden and the U.S. for its decades of support for Israel.

And following this, Netanyahu vowed his own return…

Netanyahu, speaking after him, vowed to return to power. He predicted the incoming government would be weak on Iran and give in to U.S. demands to make concessions to the Palestinians.

Netanyahu, who will now head up the opposition, is lashing out at those former allies who essentially pulled off a shock political coup by turning on him as the “fake right”… He says his governments had been “forced” to undo the previous governments’ economic policies and will do so again if it returns to power in the future, Times of Israel reports. And more:

He accuses Bennett of perpetrating the “greatest fraud since in Israel’s history,” noting the right-wing leader had ruled out a government with Lapid before the election.

The prime minister says the press will praise Bennett because they know “Bennett and his allies are ‘fake right.’”

In Gaza, Hamas issued this threat: “No matter the form of the Israeli government, it will not change the nature of our dealings with [Israel]. It is a settlement occupation entity that must be resisted and from which our rights must be wrested by any and all forms of resistance, foremost of which is armed struggle,” according to the words of Hamas spokesman Fawzi Barhum.

The Antisemitic Card a Form of Moral Blackmail 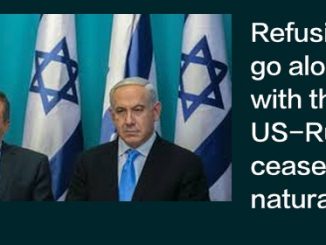