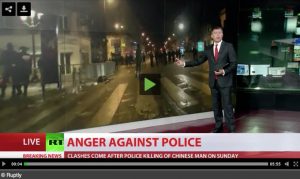 SEE VIDEO HERE
Hundreds of protesters have gathered in front of police station in Paris for the 3rd consecutive night to vent their anger over the killing of a middle-aged Chinese man over the weekend. Tensions quickly escalated into clashes with police again firing tear gas in an attempt to disperse the angry crowd.

RT’s correspondent at the scene, Charlotte Dubenskij, reports that police used tear gas to break pockets of protesters as the crowd continues to shout “Police assassins!”

“We’ve been seeing bottles thrown. We’ve got tear gas flown, pepper spray. I actually had it right in my face, we’ve been sort of with the crowd as it’s moving,” Dubenskij said. 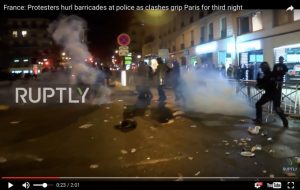 “Police have been responding with tear gas and pepper spray – not very nice if you are in the middle of it, just like we were in the last few minutes. I mean it is really horrible stuff,” she added.

Protesters have been pushing rubbish bins onto roads full of traffic and have attempted to dismantle metal street barriers forcing police to intervene. Officers also reacted to verbal abuse by pushing protesters back. 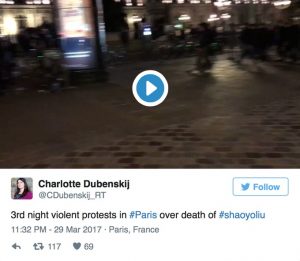 As rows of police in riot gear moved in to take control of the area, firefighters were seen putting out fires in rubbish bins set ablaze by the rioters.

Several hundred people took to the streets of Paris on Wednesday for yet another vigil for Shaoyo Liu, the 56-year-old Chinese man who was shot dead on Sunday by a BAC (anti-crime brigade) policeman during an intervention at his home over a “family dispute.”

Marching against police brutality in Paris’ 19th arrondissement, the protesters gathered at the site which saw hundreds of members of the Asian community participating in nightly riots over Monday and Tuesday.

Just as with the last two protests, the activists shouted anti-police brutality slogans while placing candles in remembrance of Shaoyo Liu. Paris’ Asian community is demanding an explanation for the unjustified brutality it has been subject to at the hands of French police, as well as the truth about why officers killed the Chinese man in France’s capital.

Lulu Zheng, the nephew of Shaoyo Liu, told RT’s Ruptly that all the protesters want is the truth about the tragic death.

“You have the violence of the police that strikes our Asian community. I have no idea about the reason, but we are here to demand an explanation,” Zheng told RT’s news video agency on Tuesday.

Police said the 56-year-old attacked the officers with a pair of scissors. The victim’s family refutes this explanation, however, saying he was using the scissors to cut fish he was cooking.

“We want the truth. [We want to find out] why a policeman comes into someone’s home, breaks the door, and pulls the trigger,” Zheng said in perfect French.

As the protests continue, authorities have meanwhile suspended three police officers involved in Sunday’s shooting pending the results of an investigation.