Part IV of Narco-Socialist Cartel: Morales, the Pope and the Chaos in Bolivia

When Luis Fernando Camacho (pictured), the right-wing “civic activist”, entered the Quemado palace in La Paz on 11 November, he placed a Bible on the ground and said he was driving out the pagan goddess Pachamama from the palace. 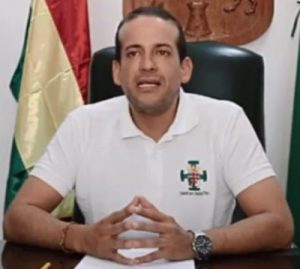 Although many of his followers began to burn the wiphala flag, which is supposed to represent indigenous peoples, Camacho has repeatedly called for tolerance and respect for the wiphala flag.

As US “leftist” imperialism helped create the ideology of the wiphala flag (pictured below), Camacho and his cronies will probably not jeopardize their work.

Is Camacho a US puppet? He has close links with US government circles. He recently addressed the Organisation of American States but he was prevented from speaking due to the antics of the Soros-funded Code Pink activists who were paid $15 an hour to protest. As I’ve explained before, both sides in the Bolivian crisis are backed by imperial interests.

Camacho is a member of the Masonic Logia de los Caballeros in Santa Cruz, a right-wing elitist lodge, composed of wealthy capitalists and latifundistas. Camacho is also accused of having links to the drug trade and overseas bank accounts. As Free Masons swear on the Bible, the facade of Christianity is often used to deceive the masses as to the real interests they serve — the interests of Satan.

Many LGBT groups in Latin America use the wiphala flag, and it is the purported acceptance of sodomy by Andean savages which was used by the Morales regime to justify the Gender Identity Law of 2016, seen as the most pro-transgender law in the world. The rainbow flag is also being 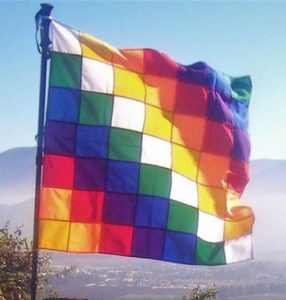 promoted by powerful rabbis lobbying the United Nations to push their Talmudic Noahide Laws on humanity.

But the wiphala flag is a pure invention. Pre-Columbian peoples did not have flags. According to many experts, including Peruvian anthropologist Ramón Pajuelo, the flag is a pure invention. As pre-Columbian Andean peoples regularly fought each other to the death, the idea that they all had a unified flag is ridiculous. The wiphala flag, however, might have an occultic origin and purpose.

The wiphala flag is a tool used by imperialism to divide people on the basis of race. It is an attempt by fake anti-imperialists to re-write Latin American history so as to demonise the role of the Catholic Church in liberating its people from barbarous regimes which enslaved and murdered millions.

It has also been claimed by imperial agents such as Max Blumenthal and Medea Benjamin that Santa Cruz is a centre of “white supremacy”. Again, the commentators who have claimed this obviously know nothing about Latin America. Santa Cruz is predominantly mestizo. It is, in fact, a shining example of the anti-racist policies of the Spanish Empire, which encouraged miscegenation between Spanish settlers and Native Americans.

Liberal historians like to ignore the inconvenient fact that it was Catholic Spain which invented modern anti-racism.

The Spanish Empire passed the Burgos Laws in 1512, which abolished slavery and made it mandatory for Indians to be paid a just wage. The Burgos Laws were based on the work of numerous theologians, philosophers and jurists in Salamanca University and are the origin of international and human rights law.

Bolivian Aymara philosopher Fernando Untoja says Morales’ indigenous politics reproduces a colonialist and racist agenda of divide and rule. For Untoja, Bolivia’s white and mestizo population are just as indigenous as the Aymara, Quechua and other ethnicities. Untoja says the wiphala flag is an invention which serves that divisive agenda and nothing more.

According to Untoja, the Morales regime imaged the Aymara culture as peaceful, nature-loving and kind, an imagined and utopian conceptualisation.

Untoja develops the term “rivalidad”, rivalry to denote a special kind of competitiveness and combative animus unique to Aymara culture. This communal rivalry means that while men compete with each other, they also try to stimulate and help their rival.

This sounds similar to the type of team spirit the Soviets attempted to promote in the 1930s where they would encourage workers to compete with each other to improve production, while at the same time maintaining a spirit of solidarity. But this is the antithesis of Morales’s Pachamama socialism.

Untoja wants to revive and promote the ancient Aymara and Quechua system called Ayllu – a communal society based on kinship, reciprocity and a strong ethos of public service.

The rainbow flag is used by rabbis to promote the Noahide Laws. The Noahide Laws are a set of seven Talmudic laws which powerful rabbis hope will form the basis of a global legal system. The laws will create a caste system which will enslave all Gentiles and persecute Christians in particular. Initiates in Free Masonry are called Noachidae.

Syncretism, or the joining of various religions, is the basis of the emerging world religion. Contrary to leftist sloganeering, the wiphala flag is a symbol of hatred, hatred for Christian culture, and hatred of Mestizos and people of European descent. Morales Rockefeller-funded “socialism” relied heavily on using indigenous people as a support base. Anti-racism and anti-fascism are the key ideological tropes of globalisation.

What the UN-backed Morales education system will never teach indigenous people is that racism, elitist exclusion and extreme exploitation were introduced, not by the Catholic Church or the Spanish Empire, but the Free Masons who fought for “independence” with backing from their brothers among the US imperial elite, who have ruled Latin America ever since.

After the Flood, God sent a rainbow as the sign of a new covenant. Yet in today’s world, it has become a symbol of man’s pride, the supreme sin in Christianity. Pride is the supreme sin because it prevents man from being open to truth.

The rainbow pride flag, the Noahide and wiphala flags are all part of the attempt to brainwash the masses into accepting a new global Luciferian religion based on fake diversity and human rights.

They should all be burnt as a warning of the fires of Hell that await those who wave them.

Is the UN Preparing Children for Abduction? [VIDEO] 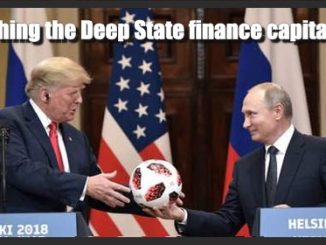 The Helsinki Summit and The Future of Syria: Is Trump a Peacemaker?