Up until last week, Julian Assange had been held in unofficial solitary confinement inside of the Belmarsh prison healthcare unit – a loophole which the UK government began using in May, according to 21st Century Wire‘s Nina Cross.

Thanks to outcry by fellow inmates and Assange’s legal team, Assange was moved out of the Belmarsh healthcare unit – which has been “weaponized to arbitrarily isolate and punish a prisoner.” 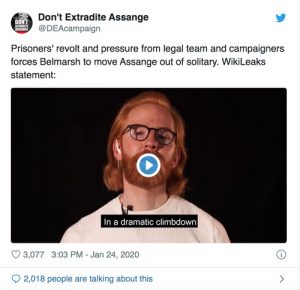 Of note, more than 100 Yellow Vest protesters traveled from France on Saturday to join a demonstration outside of Belmarsh in support of Assange.

Up until now, UK authorities had denied Assange has been held in solitary confinement – or that it’s even practiced in British prisons at all.

Until now, Assange has been locked in a cell alone for over 22 hours a day and deprived of association with other prisoners for several months.   This is in breach of both the European Prison Rules and the British government’s own prison inspectorate human rights standards …

In an attempt to mitigate growing public outrage, Her Majesty’s Prison and Probation Service (HMPPS) has been sending out letters in response to the influx of complaints it has been receiving regarding the abuse of Assange.  In its response it refuses to address his case and produces a list of standards and laws written for the protection of prisoners as evidence he is in ‘safe hands.’  However, anyone who has followed the continued arbitrary detention of Assange in Belmarsh will know he has been placed effectively outside the reach of laws and standards; even access to his lawyers and legal documents, normally preserved by statutory prisoner rights – has been harshly restricted, all of which has had a crippling effect on preparation for his defence in a case of historical significance. –21st Century Wire 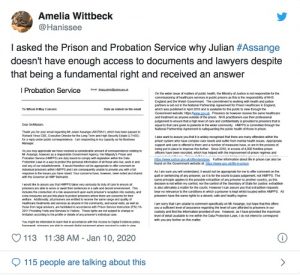 Meanwhile, the Brits are completely dismissing statements by UN Special Rapporteur on Torture, Nils Melzer, when they claim that “prisoners are not detained in solitary confinement.” 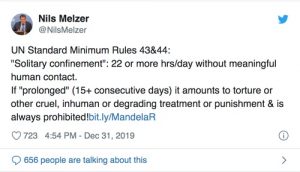 Moreover, Cross notes that the UK’s laughable statement that they care for all prisoners clearly ignores the UN Working Group on Arbitrary Detention, which says that Assange is being arbitrarily detained in violation of international law.

“What’s more, the British state’s dismissing out of hand any accusations  of ‘solitary confinement’ as a falsehood or public misconception – must surely undermine the work of prison charities and scholarship in law and prison systems which exists to shed light on the consequences of solitary confinement including ill-health and suicide,” writes Cross.

Hence, the HMPPS letter can be viewed as a public relations exercise designed to promote the image of good governance, a facade designed to mask the institution’s deployment of the very same strategy practised by the government when called upon to answer for its abuse of Assange: denial and silence. 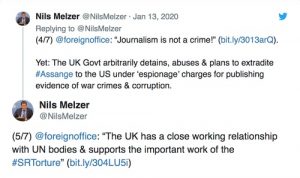 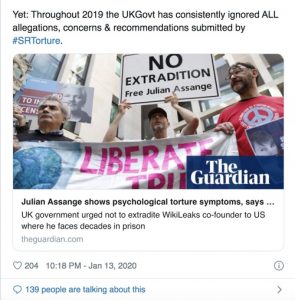 “Segregated conditions are also sometimes applied outside of segregation units. Prisoners can be kept on the wing, but locked in their cells for the most of the day, and taken to shower and exercise separately from other prisoners on the wing.”

So what was Belmarsh doing? While official prisoner segregation is allowed under rule 45, holding Assange in the medical wing allowed them to ignore several associated laws.

“45.—(1) Where it appears desirable, for the maintenance of good order or discipline or in his own interests, that a prisoner should not associate with other prisoners, either generally or for particular purposes, the governor may arrange for the prisoner’s removal from association accordingly.

(2) A prisoner shall not be removed under this rule for a period of more than 3 days without the authority of a member of the board of visitors or of the Secretary of State. An authority given under this paragraph shall be for a period not exceeding one month, but may be renewed from month to month”

By holding Assange in unofficial segregation, he was excluded from ‘the rules’ and therefore may have been worse off than if he had been officially segregated:

“The regime for segregated prisoners (under Prison Rule 45 (YOI 49)) should be as full as possible and only those activities that involve associating with mainstream prisoners should be curtailed.” – SEG PSO

Read the rest of the report here. 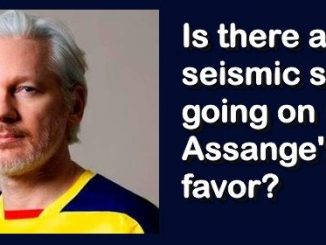