ER Editor: For a review of this week, we also recommend Et voila! Notre-Dame’s Billionaires Come Out of the Woodwork – to Privatize It?

1st since Notre Dame fire: Yellow Vests back in action despite ‘unifying’ disaster & they are angry

Yellow Vest protests brought clashes and tear gas back to the streets of Paris, despite politicians’ calls for “unity” in the wake of the Notre Dame fire. For protesters, the response to the fire only showed more inequality.

Saturday’s protests mark the 23rd straight weekend of anti-government demonstrations, but the first since Notre Dame de Paris went up in flames on Monday. Officials were quick to criticize the protesters for returning to the streets so soon after the disaster.

“The rioters will be back tomorrow,” Interior Minister Christophe Castaner told reporters on Friday. “The rioters have visibly not been moved by what happened at Notre-Dame.”

For many of the protesters, grief over the destruction of the 800-year-old landmark has made way for anger. With smoke still rising from Notre Dame, a group of French tycoons and businessmen pledged €1 billion to the cathedral’s reconstruction, money that the Yellow Vests say could be better spent elsewhere.

“If they can give dozens of millions to rebuild Notre Dame, they should stop telling us there is no money to respond to the social emergency,” trade union leader Philippe Martinez told France 24.

Saturday’s protests saw a return to scenes familiar since the Yellow Vests first mobilized in November to protest a fuel tax hike. Demonstrators in Paris’ Bastille district set barricades on fire and smashed vehicles, and police deployed tear gas to keep the crowds at bay. 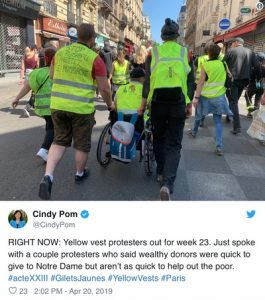 Some 60,000 police officers were deployed across the country, while a security perimeter was set up around Notre Dame in Paris. A planned march that would have passed the site was banned by the authorities, but sporadic incidents of vandalism and looting took place across the city, with at least one car torched. 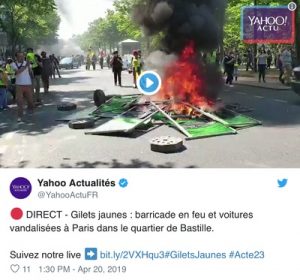 There were also clashes between protesters and gendarmerie in the capital. The police used tear gas and water cannon to disperse the crowd, arresting 189 people, according to France Info.

Yellow Vest rallies also took place in Nantes, Pau, Caen, Montbeliard, Bordeaux, Lyon and other French cities. The total number of people who took to the streets on Saturday reached 9,600, with 6,700 of them protesting in Paris, the Interior Ministry said. 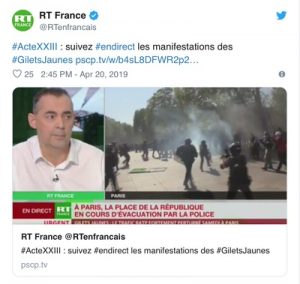 Beginning as a show of anger against rising fuel costs in November, the Yellow Vests movement quickly evolved into a national demonstration of rage against falling living standards, income inequality, and the perceived elitism and pro-corporate policies of President Emmanuel Macron. Over 23 weeks of unrest, Macron has made several concessions to the protesters’ demands, but has thus far been unable to quell the rising dissent. 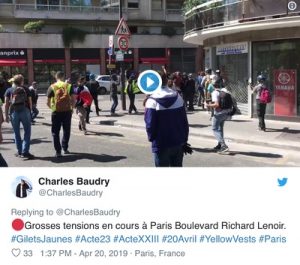 After Notre Dame caught fire on Monday, the president postponed a television address to the nation, during which he was expected to unveil a package of tax cuts and other economic reforms, another measure to calm the popular anger in France.

Macron’s address will be held on Thursday. 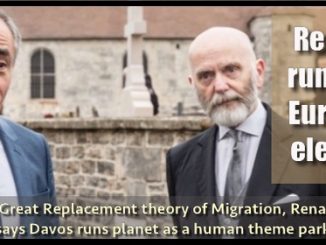 Renaud Camus announces his own list for European elections