Now that the French Secret Services and their foreign associates have read the accounts of ‘false flag’ suspicion in the non-mainstream media, the French Government had to resort immediately to all sorts of doubt deviating maneuvers.

– The truck driven through the Bastille Day celebrating masses on Boulevard des Anglais, suddenly did not break through the barricade protecting the strip as a pedestrian area for the celebration, but it entered through an unprotected side-street. The ‘drive’ was allegedly prepared days in advance, even with dry runs, according to street cameras and telephone conversations between Mohamed Lahouaiej Bouhlel (MLB), the driver of the truck, and a bunch of friends, whom he also asked to supply him with weapons. Strangely, the videos and telephone conversations emerged just days later.

– Judging from the bullet holes in the truck’s cabin, it doesn’t look like the police was actually shooting at the driver. Has anybody seen him dead?

– About five or six of MLB’s sudden associates where in the meantime apprehended for questioning. The number of associates varies depending on the mainstream media you read or listen to.

– TeleSur reported that MLB’s brother in Tunisia was surprised having received a sudden transfer of €100,000 from his brother, as compared to the former small transfers corresponding to MLB’s previously reported poverty and debt. Is this a hint to make us believe that he got paid a lot of money to carry out this mass-murder on behalf of Daesh?

France as a country and through NATO is supporting ISIS-Daesh with training, weapons and money, along with Washington and Washington’s other European and Mid-Eastern vassals. Why would Daesh attack France?

May this be a dual complot, Daesh cells in connivance with the highest French authorities, is ordered to attack France yet again, so as to incite France and other US vassals to keep funding more bombing campaigns in Syria, Iraq and Libya, knowing quite well that to the contrary of what the mainstream media (msm) wants us to believe, the bombs are not meant to subdue and eliminate Daesh, but rather to conquer Syria, Iraq, Libya and more to come – of course, on behalf of the empire. Daesh-IS-ISIS are in fact NATO’s foot soldiers.

After all, Mr. Hollande and his Minister of Defense have in the past boasted of supporting Al-Nusra on behalf of Washington, of course, since Washington declared them as ‘moderate rebels’ who have to be helped to oust the legitimate President Al Assad, no matter that Pentagon observers concluded that Al-Nusra was identical with the Islamic State.

In the meantime, even the illustrious, neoliberal mouth piece of Washington, the New York Times, pits some doubts against the official story. In an article on 18 July, the paper concludes

“governments also see a benefit in linking the Islamic State to what are sometimes random and unconnected acts of violence. It is a way to project order amid chaos, and to try to assure jittery citizens that there is a strategy to end the violence. For example, in the days since the Nice attack, French officials have pledged to increase the resources that the country is devoting to the bombing campaign against the Islamic State in Syria and Iraq.”

“after Mohamed Lahouaiej Bouhlel slaughtered dozens of people when he drove a 19-ton refrigerated truck through a Bastille Day celebration on Thursday in Nice, France, the authorities did not hesitate to call it an act of Islamic terrorism. The attacker had a record of petty crime but no obvious ties to a terrorist group, yet the French prime minister swiftly said Mr. Lahouaiej Bouhlel was “a terrorist probably linked to radical Islam one way or another.”

Quoting Daniel Benjamin, a former State Department coordinator for counterterrorism and a professor at Dartmouth College, the NYT article concludes, “If there is a mass killing and there is a Muslim involved, all of a sudden it is by definition terrorism.”

This definition of terrorism serves the purpose. It allows building up more hatred against Muslims, more public support to go to war against them, more profit for the war industry – and, foremost, allows the elite and real perpetrators of such crimes and wars moving ever a step closer to Full Spectrum Dominance. And, We, the People, remain oblivious to this Bigger Picture.

This, like the previous two French massacres – and also the one in Brussels earlier this year – are botched cases of the security agencies in charge of organizing them. As in the previous cases, the media will now be told to shut up. The case will be forgotten fast; until the next massacre, when innocent people are being murdered to steadily advance the cause of a small elite to whom our western governments are enslaved.

Since the ascent of neoliberalism in the 1980s, our western world’s leaders have gradually turned to criminals and associates of an industry of legalized thieves, killers, drug-traffickers and liars. Hard to believe? Just look at the FED (Federal Reserve), ECB (European Central Bank), BIS (Bank for International Settlement), Wall Street; the war industry, DEA (Drug Enforcement Administration), and the six giant Anglo-Zionist media corporations that control 90% of the western news.

Take Obama, he prides himself to personally approve every drone killing, extra-judiciary killings are assassinations. We, the People, have become numb to these events.

The president of the United States of America, the head of the self-proclaimed empire, is effectively a murderer, has become the new normal. The fact that Hollande, Cameron, Merkel and many other peons of his empire are also murderers cumleaders (sic) of western countries around the globe – of billions of people – is swallowed without a whimper by the masses.

Where have we gone? What have we become?

Where is our self-esteem, our respect for the life of our fellow human-beings – our deep-rooted original sense of ethics and solidarity? 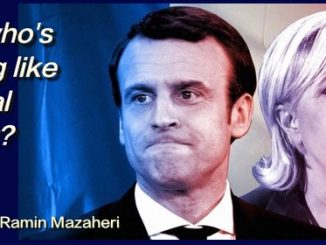 Macron to turn the French state of emergency into common law 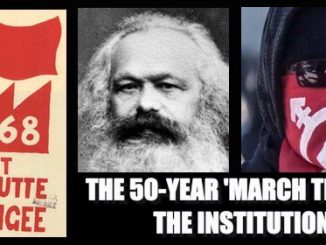 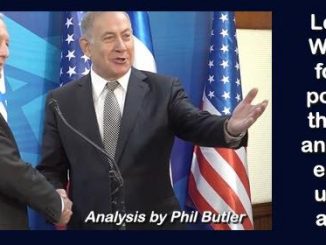 Israel’s Role in the Cataclysm Yet to Come