Authored by Philip Bagus via The Mises Institute

In an open letter to the EU Commission with the title Joint Letter: Reshaping the European Fiscal Framework, on February 17, 2021, a coalition of left-wing and green politicians, think tanks, and trade unions unsurprisingly led by George Soros made an appeal for a permanent common EU budget with the possibility of borrowing to support investments that advance the Green Deal and other pharaonic projects.

In addition to the permanent EU budget, the letter calls for overriding and making more flexible EU fiscal rules and supporting fiscal policy with further monetary policy measures by the European Central Bank.

What to say about these proposals?

The permanent EU budget and the possibility of the EU to issuing debt have always been the pipe dream of socialist politicians who want a European superstate. This proposal would be an important step toward such a goal, as from then on the emerging European central state could assume more powers and further grow. The brakes would be off. Again and again socialists have tried to take advantage of crises to move closer to the goal of a European central state by creating new European institutions and increasing the power of the already existing ones. Now the covid-19 crisis is the perfect excuse to make another effort and create facts.

The signatories believe that only the state can lead the economy out of the corona crisis and that it must manage climate change in a socially just manner. In their vision, not only should the EU budget contribute to this end, but fiscal rules should be abrogated in its pursuit, especially the Stability and Growth Pact and the European Fiscal Compact. These were introduced to limit the deficits and debts of the euro states mostly due to German pressure. These fiscal rules are a thorn in the side of the signatories and governments. In the corona crisis, the socialists want to use fiscal policy for macroeconomic management. Of course, this requires the help of monetary policy, because the deficits and debts are to be monetized, of course, with new money printing by the ECB. For the Keynesian-minded signatories, it is obvious that it is the state that must rebuild the economy after the corona crisis and lift millions of people out of poverty. In doing so, strict fiscal rules should not hinder the state.

The economic illiteracy evident from such demands is appalling. Ultimately, the proposal boils down to the ECB printing as much new money as possible, to be spent wisely by the EU and the member states. Printing money, however, does not make a society richer: that is a common misconception. Printing new money does not create any new wealth, because it does not increase the productive capacity of the economy. In the same way as adding a zero to all existing banknotes and bank accounts does not add one iota to society’s wealth, printing new money and handing it over to the state does not do so either. However, and in contrast to just adding zeros to the existing money titles, the central bank’s printing of money redistributes wealth in favor of the state and parties connected to it and to the detriment of civil society. Another difference from increasing the money supply by adding zeros is the inefficiencies and the squandering of resources made possible through the monetizing of deficits and the higher government expenditures.

There is another common misconception at the basis of the proposal put forward in the joint letter calling for the state to “[lift] millions out of poverty.”

It is a grave error to believe that it is the state that lifts people out of poverty, and that this would simply require letting the state off the leash by abrogating all fiscal rules and printing money. If this were true, the Soviet Union would have been one of the richest countries in the world. It is always private entrepreneurs who create wealth, by trying to satisfy the needs of their fellow human beings better and more cheaply than their competitors. It is precisely this private initiative that creates wealth and that would also lead the economy swiftly out of the corona recession.

However, private entrepreneurs need freedom to do so this, i.e., low regulations and taxes, as well as a sound currency.

So private entrepreneurs need exactly the opposite of what the advocates of the European superstate demand in their letter. 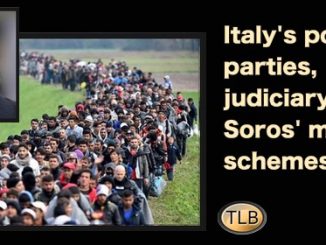 Russian Operation in the Ukraine: Getting Troops in Place – End of Day 2