ER Editor:  Yesterday’s edition of UK Column news (June 10, 2020) raised some very critical questions around how the UK’s National Health Service is currently being promoted to the public. The NHS is considered a national treasure; to criticize it automatically invites backlash in many quarters. Yet this vital discussion of NHS functioning (or recent lack thereof) during the lockdown and the current media campaign around it does just that.

What uses is this Big Government structure going to be put to under the New Normal?

We recommend watching the video discussion in its entirety, but here is a summary of the points raised up to 29 minutes. Alex Thompson is participating along with regulars Mike Robinson and Brian Gerrish: 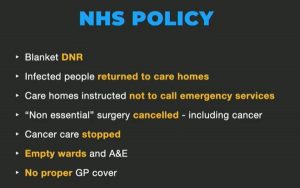 NHS Consultant Says Staff Are Being Silenced Over COVID19

UK GPs to get £12.58 Per Dose to Give Vaccine from December