One of the much touted Western values is the love for freedom of speech. Yet, the UK has disabled the more objective RT’s ability to run its station right at the greatest country on Earth, i.e. Great Britain.

This came in after US State Secretary John Kerry announced an impending US cyber-attack on Russian interests. 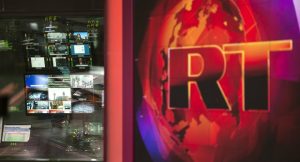 “Our accounts in Britain have been blocked. All of them. ‘Decision not to be discussed’. Hail to freedom of speech!” RT’s editor-in-chief Margarita Simonyan said on her Twitter account.

The National Westminster Bank has informed RT UK that it will no longer have the broadcaster among its clients. The bank provided no explanation for the decision.

“We have recently undertaken a review of your banking arrangements with us and reached the conclusion that we will no longer provide these facilities,” NatWest said in a letter to RT’s London office.

The bank said that the entire Royal Bank of Scotland Group, of which NatWest is part, would refuse to service RT.

The letter said the decision was final and that it is “not prepared to enter into any discussion in relation to it.” 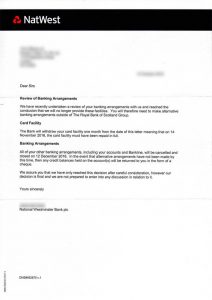 The RT press office pointed out that NatWest is part of the Royal Bank of Scotland Group, which counts the UK government as a significant shareholder.

“This decision is incomprehensible, and without warning. It is however, not at odds with the countless measures that have been undertaken in the UK and Europe over the last few years to ostracize, shout down, or downright impede the work of RT. RT UK will continue its operations uninterrupted,” RT press office stated.

“We have no idea why it happened, because neither yesterday nor the day before yesterday, nor a month ago, nothing special happened to us, nobody threatened us in any way. Hypothetically, this may have something to do with new British and American sanctions against Russia, which may be announced soon. It may not. Our legal department is dealing with the issue now,” Margarita Simonyan told RBK business news website.

Commenting on the development, Russian Foreign Ministry spokesperson Maria Zakharova said it indicated that “Britain on its way out of the EU abandoned all its commitments to protect the freedom of speech.”

“I sincerely hope that there’s no political motive for this, because we know that the British government isn’t happy with RT in Britain,” publisher Marcus Papadopoulos told RT.

“RT has a lot of viewers in Britain. Many British people now tune in to RT to receive information on major topics around the world, including in Britain. And many British people believe that the alternative accounts that RT puts forward and covers are more truthful than what they’re hearing from, for example, Sky News.

“If no bank in Britain would allow RT to be a customer, then that could spell the end of RT broadcasting in Britain, which would be a catastrophic event for freedom of speech in Britain,” he added.

“It seems more than a coincidence that this has taken place at a time when the anti-Russian propaganda has been ramped up to unprecedented levels,” writer John Wight told RT. “This reflects the extent to which the West is losing the information war. RT plays a key role in challenging the narrative of the West and Western media when it comes to events in Ukraine, Syria and the Middle East.”

In fact, it’s now a developing trend to force a shutdown on alternative media that’s not in their payroll yet. So much for Western hypocrisy.

The following are access codes / machine generated passwords which can be used against the subjects once all of the related files are released online.

The US State Department is now applying pressure against Ecuador in order to stop Julian Assange from releasing more damning evidence about Hillary Clinton’s highly treasonous past. 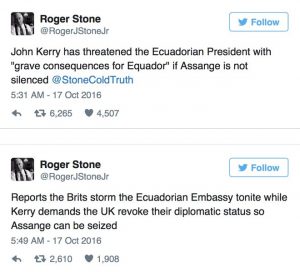 The US State Department is now applying pressure against Ecuador in order to stop Julian Assange from releasing more damning evidence about Hillary Clinton’s highly treasonous past.

Considering that most media networks in the West are owned by a single criminal entity, we can expect that if left unchallenged, that part of the world will descend into a totalitarian empire if it’s not the prevailing situation yet, to preserve the Oligarchy at the helm, amidst the BRICS Alliance’s decisive efforts to force them to institute reforms, and depart from their destructive foreign policies in the Middle East and elsewhere.

The Khazarian sociopaths can always try to silence a few independent medium and activists, but they can never win this time around. The people has grown more emboldened by the increasing level of awareness to stand against Western governments’ tyranny.

It’s just a matter of time when this long nightmare shall end.

Karin Kneissl: From ‘megaphone diplomacy’ to aphasia: The deep disconnect between the EU and Russia