ER Editor: We’re of the opinion that Wayne Dupree‘s rallying call for Americans (and the rest of us) to recognize what’s going on under our very noses by the far left is entirely justified. See also these other RT pieces by Dupree: Wayne Dupree: Those siding with political left are clueless as to its evil intentions and Wayne Dupree: Hands off my history! Anarchic mobs tearing down statues are vanguard to socialist future.

We draw readers’ attention to an article of a few days ago by Robert Curry of Real Clear Politics, titled What We Celebrate on the Fourth. Of note:

“We hold these Truths to be self-evident, that all men are created equal, that they are endowed by their Creator with certain unalienable Rights.”

The world in those days operated on the basis of utter inequality. The self-evident truths of the Declaration of Independence contradicted the entire experience of mankind. Whether the ruler was a king who claimed to rule by divine right or an emperor who claimed the mandate of Heaven, it was everywhere the same. Because the Founders’ idea of government by, for, and of the people is so deeply engrained in our imaginations, it is difficult for us to conceive of human life as it then was.

America’s truly incredible social and political success put this older world on the road to extinction. Foreign observers went from confidently predicting that America would fail to living through the collapse of their own regimes, made illegitimate by America’s shining example. Kings and emperors are gone now or reduced to mere ceremonial figures. Today, only peculiar and backward places, like Saudi Arabia, operate according to something like the old way of governance, and everyone knows that this anomaly will last only as long as the Saudi royals can continue to bribe their subjects.

Make no mistake, the Founders understood America’s significance for all humankind. They knew that they had put the world on the path to turning right-side up at last. Here is how Thomas Jefferson put it, near the end of his life:

“All eyes are open to or opening to…the palpable truth that the mass of mankind has not been born with saddles on their backs, nor a favored few booted and spurred, ready to ride them legitimately, by the grace of God.”

You may be familiar with these words, too, but have you noticed how that “by the grace of God” works here? People everywhere had been operating according to the belief that God had put saddles on their backs and rulers in the saddle. It was simply accepted as the way of things. Jefferson was declaring the end of all that. The old idea of hereditary monarchs backed by an official state religion was over. …

Wayne Dupree: Want America back from these anarchists? Be prepared to fight for it

Russiagate, impeachment, Covid-19 shutdowns, fake news about bounties on US soldiers, and race riots are just the beginning. This is an all-or-nothing last gasp from malevolent malcontents who hate everything America stands for.
.

Count me among those who believe that the crises that have erupted across our nation are the workings of insidious groups with ill purposes. There are a lot of people in America who were never taught basic values and who have learned how to game the culture. They are like magnets, attracting anything and anyone who is similarly undisciplined and anxious for something to connect with.

Some of these bands of ne’er-do-wells are independent operators, and some are hangers-on to groups that are funded by entities with malevolent intentions.

Black Lives Matter, Antifa, dysfunctional tribes of malcontents, people who want free stuff, and wannabes who hang on to any group that will accept them, are bobbing around America, trying to keep a negative high going.

This eruption of America-hating is being carried out by a mindless collection of grievance groups who are nothing more than marionettes on the puppet strings of rich and powerful leftists like George Soros. Their socialist, globalist world vision cannot be achieved with a strong America.

This anti-America fervor is being incited by people who have been taught that President Trump is the equivalent of Satan and, until he is gone, nothing good will come. The Democratic Party, our American media, even some members of the Republican Party and their agents of ill-will, continue to fan those flames.

One thing is for certain. We need to make sure a message is being sent throughout America that many mayors and governors are turning our nation into Hell. People need to recognize that the America we miss is being rejected by the hordes of mayhem who take their inspiration from these leftist political leaders.

Teachers’ unions and academia, in particular, are destroying America by the insidious nature of their work on our children. They are trying to clone our children into radical leftist radicals.

Russiagate, impeachment, economy-ruining Covid-19 shutdowns, fake news about Russian bounties on American soldiers in Afghanistan, and race riots are just the beginning. This is an all-or-nothing last gasp from a coalition of people who despise everything America stands for and who know they are finished if President Trump wins.

Just remember that it is slaves who kneel. Free patriots stand proud and tall in celebration of those freedoms granted to us, not by the government, but by our Creator and guaranteed by the government. Be American. Be strong. Never kneel. Appeasement never works because it is never enough, no matter how much you give. Carry a copy of the Constitution with you to remind yourself what America is all about. Honor the men who pledged their lives, their fortunes, and their sacred honor to establish this Republic. We are not simply a Democracy; we are a Republic.

Yes, we have ourselves made horrific errors in judgment over the past decades, chiefly when it comes to the degree of influence such leftists have been allowed to wield. But one way or another, we are right now living in some of the most exciting and interesting times humanity has known; yes, the irony of the Chinese curse in these current times is fully acknowledged.

We are living through a period that only a few years ago, most of us never thought we would live to see. But something then proved to be a very real last straw on a very real camel’s back. And they are not getting up after this. One way or another, all the anarchists and leftists will stay down. Even the hypothetical worst-case scenario – their taking Congress and the Presidency – would lead only to a downfall so ugly that even they, in retrospect, will prefer a Trump victory.

This rock-bottom-of-the-barrel collection of dregs believe in socialist ideals and methods that have been seen to fail wherever and whenever they have been tried over the past century, at the cost of hundreds of millions of lives.

Do not be deceived by those crying over some imagined racism. They won’t take part in the process to eliminate it, and the lawmakers who have been in charge for half of their lifetimes do not view it important enough to work to fix it. Everyone who is an American has the same opportunities to become successful, but it requires hard work and diligence on the part of each individual. Don’t get me wrong, we do have people that are “born rich” but they have to work to maintain it or they lose everything, too. I guess what I am saying is that everybody has to work for their success. In today’s world, no one owes you anything. What you make of yourself is your responsibility. America’s greatness comes from the freedoms we all share.

I want America back, and if we stick together and maintain our resolve, it will happen. Be safe, but be prepared! 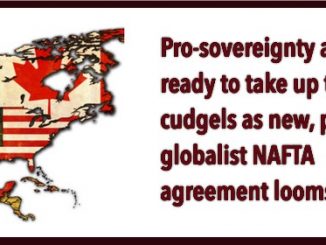 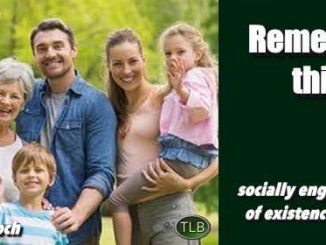 The Tragedy of the European Family