Washington must think the rest of the world is as stupid as many of its own politicians are. Its passing into law – signed by President Trump this week – of sanctions to halt the Nord Stream-2 and Turk Stream (pictured) gas supply projects is a naked imperialist move to bludgeon the European energy market for its own economic advantage.

US sanctions are planned to hit European companies involved with Russia’s Gazprom in the construction of the 1,225-kilometer pipeline under the Baltic Sea, which will deliver natural gas from Russia to Germany and elsewhere across the European Union. The €9.5 billion ($11bn) project is 80 per cent complete and is due to be finished early next year.

It is quite clear – because US politicians have openly acknowledged it – that Washington’s aim is to oust Russia as the main natural gas exporter to the giant EU market, and to replace Russian gas with more expensive American-produced gas.

What’s hilarious is the way American politicians, diplomats and the news media are portraying this US assault on market principles and the sovereignty of nations as an act of chivalry.

Washington claims that the sanctions are “pro-European” because they are “saving Europe from dependency on Russia for its energy”. The American hypocrisy crescendoes with the further claim that by stopping Russia earning lucrative export revenues, Moscow will be constrained from “interfering” in European nations. As if Washington’s own actions are not interference on a massive scale.

European politicians and businesses are not buying this American claptrap. The vast overstepping by Washington into European affairs has prompted EU governments to question the nature of the trans-Atlantic relation. About time too. Thus, Washington’s hubris and bullying are undermining its objective of dominating Europe for its own selfish interests.

Russia, Germany and others have defiantly told Washington its weaponizing of economic sanctions will not halt the Nord Stream nor the Turk Stream projects.

As German Foreign Minister Heiko Maas said earlier this month, “it is unacceptable” for the US to brazenly interfere in European and Russian energy trade. The American pretext of supposedly “protecting” the national security of its purported European allies is frankly laughable.

The American agenda is a blatantly imperialistic reordering of the energy market to benefit US economic interests. To pull off this audacious scam, Washington, by necessity, has to demonize and isolate Russia, while also trampling roughshod over its European allies. Europe has partly aided this American stitch-up of its own interests because it has foolishly indulged in the US antagonism towards Russia with sanctions due to the Ukraine conflict, Crimea and other anti-Russia smears.

The legislation being whistled through the American Congress by both Republicans and Democrats (collectively dubbed the War Party) is recklessly fueling tensions between the US and Russia. In trying to gain economic advantage over Europe’s energy, Washington is wantonly ramping up animus towards Moscow.

Apart from the sanctions against Russian and European companies partnering on Nord Stream, the US Congress passed separate legislation which seeks to boost American oil and gas production in the East Mediterranean.

The headline should more accurately have been worded: ‘Congress Passes More Legislation Aimed At Bolstering America’s Energy Grip On Europe’.

The RFE report states: “The bipartisan Eastern Mediterranean Security and Energy Partnership Act, which was approved on December 19, is the latest piece of US legislation passed this year that aims to diversify [sic] Europe’s energy sources away from Kremlin-controlled companies.”

Again, the American double-think is jaw-dropping. Such is the arrogance of a flailing, delusional empire when it can publicly justify with a straight face an energy-market-grab with a veneer of virtue.

US oil and gas giants are moving into the East Mediterranean. Exxon Mobil announced the discovery 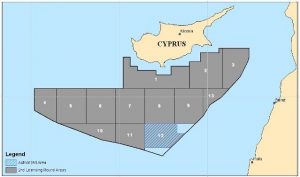 of a major natural gas field off Cyprus in February this year (see map, Block 10). American firms are also partnering with Israeli companies to begin gas production in the Leviathan Field located off the coast at Haifa (see below).

There is no doubt that the US sanctions targeting Nord Stream and Turk Stream are part of a bigger, concerted pincer movement by Washington to corner the EU energy market of 500 million consumers (more than double the US population).

Colin Cavell, a US professor of political science, commented to Strategic Culture Foundation:

“What should be hammered down in this continuing debate over which country will be able to deliver oil and natural gas to Europe is the fact that neither the United States nor, and especially, the Republican Party, stand for so-called free trade.” 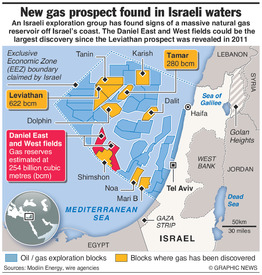 Free-trade capitalism is supposed to be an ideological pillar of the US. In this ideology, governments should not interfere with market supply and demand. But paradoxically, as far as US-imposed sanctions on Russian-European energy companies are concerned, the American Congress is “quintessentially anti-free market”, notes Cavell.

In its shameless profiteering, Washington is acting aggressively towards Russia and Europe while flouting its own supposed economic principles and relying on brute force to win its arguments.

America’s imperialist agenda towards Europe and Russia is how world wars are instigated. 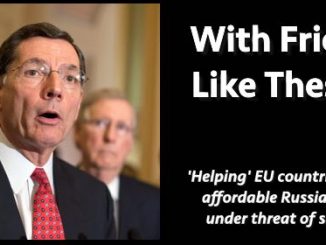