On October 8, a Ukrainian bomb destroyed the southern part of the car bridge to Crimea. The northern part was also slightly damaged, a passing train on the rail bridge next to it burned out. Some people in Kiev were quite happy about it: 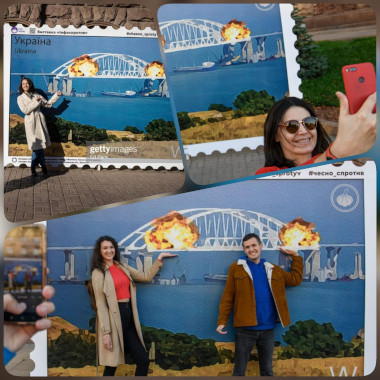 bigger
But the train traffic resumed a day later. The northern part of the car bridge was checked and car traffic in both directions was allowed. Repair preparations for the broken southern part immediately began.

Two days later the Russian military responded to the attack with the first intense strike against Ukraine’s electricity infrastructure.

Now, less than two month later, the work is already done. Four damaged bridge spans have been replaced and a new tar cover has been laid on them. Today the Russian president drove a car over it:

Putin, accompanied by Deputy Prime Minister Marat Khusnullin, was shown on state television behind the wheel of a Mercedes, asking questions about where the attack took place.”We are driving on the right hand side,” Putin said, as he drove across the bridge. “The left side of the bridge, as I understand it, is in working condition, but nevertheless it needs to be completed. It still suffered a little, we need to bring it to an ideal state.”

Putin also walked along parts of the bridge, Europe’s largest, to inspect sections that are still visibly scorched.

Bidirectional traffic will now run on the southern span while the slightly damaged northern span will be repaired. This is likely to be finished before the end of the year.

Since the bridge attack, the electricity infrastructure of Ukraine has received more missile attention. Today another attack followed. Kiev is again without electricity and water. It may well find that it will no longer be able to repair the damage.

One wonders what the people who posed in front of that bridge attack stamp poster think about that.

More bad news for Kiev is that the U.S. publicized that it has limited the range of the missile launchers it had given to Ukraine:

The U.S. secretly modified the advanced Himars rocket launchers it gave Ukraine so they can’t be used to fire long-range missiles into Russia, U.S. officials said, a precaution the Biden administration says is necessary to reduce the risk of a wider war with Moscow. The U.S. since June has supplied Ukrainian forces with 20 High Mobility Artillery Rocket System launchers, or Himars, and a large inventory of satellite-guided rockets with a range of almost 50 miles. U.S. officials say the Pentagon has modified the launchers so they can’t fire long-range missiles, including the U.S.’s Army Tactical Missile System rockets, or ATACMS, which have a range of nearly 200 miles.

That this was published is likely a hint to Ukraine that any attempt to acquire ATACMS from some U.S. allies who also have those systems will be useless. But what happens if they provide such missile and launchers that were not disabled to use them? Is the U.S. confident that its allies will make similar modifications?

The Ukrainian war machine is running on empty because the ‘west’ can no longer provide weapons and ammunition in meaningful quantities. The chance to change that in any reasonable time frame is low:

“High-end conflict consumes a lot of munitions and a lot of weaponry,” Mike McCord, the Pentagon’s top budget official, said in an interview. “We are also looking at the supply chain limitations. We haven’t got this figured out just yet.”Top Pentagon and industry officials maintain that efforts are finally ramping up to replace the weapons that the United States and its allies have shipped to Ukraine — depleting stockpiles that are deemed crucial to deterring China or other potential adversaries for years to come.
…
She cited recent deals for tens of thousands of 155mm artillery rounds that the Ukrainians are using up almost as soon as they arrive. By the spring, “we will be able to do 20,000 rounds a month,” she said.

But it will take time to manufacture enough of them, she said, adding that the U.S. will get that rate up to 40,000 rounds a month in the spring of 2025.

This morning an explosion took place at a Russian airfield in the Volga region. The Russian military now says that it was from the debris of an Ukrainian drone that its air defenses had shot down:

AZ @AZgeopolitics – 17:13 UTC · 5 Dec 2022🇺🇦✈️🇷🇺The Ministry of Defense of the Russian Federation: On the morning of December 5, the Kiev regime attempted to strike with jet drones at the “Dyagilevo” and “Engels”airfields.

Three Russian soldiers who were at the airfield lost their lives as a result of an attack by the Kiev regime, four more were wounded and taken to hospitals.

As a result of the fall and explosion of the wreckage of Ukrainian UAVs at Russian airfields, the hull plating of two aircraft was slightly damaged.

Video showed that the explosion in Saratov took place on the ground. Air defense usually explodes a drone while it is still flying. I therefore doubt that the Russian report of this is completely truthful.

One also wonders where Ukraine found jet powered, long range suicide drones. It strongly doubt that these were homemade or will become available in higher quantities.

Has The Pentagon Been Sending “Biological Bombs” Against Europe?