ER Editor:  Ukraine has attacked a chemical plant producing mineral fertilizer at Gorlovka in the Donbass (see also this short video – browsers will translate), and an area adjacent to the Zaporozhyia nuclear power plant causing power supply problems. Here’s a map of these two places, with reporting below: 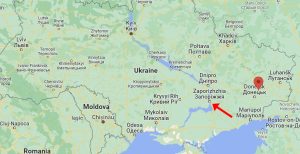 It’s widely believed by specialist commentators that military operations inside Ukraine are directed by Washington. Would the targeting of a fertilizer plant have anything to do with creating predicted crop shortages and the Agenda 2030 plan?

The city of Gorlovka has also been under Ukrainian military bombardment. See this story from Readovka (browsers will translate): As a result of the shelling of Gorlovka by the Armed Forces of Ukraine, a woman was killed, and her children were seriously injured

Thanks to AlethoNews for providing us with the first article.

Ukrainian rockets loaded with cluster bombs damaged a chemical plant in the Donetsk People’s Republic on Thursday and caused an electrical fire, according to local officials. The “Stirol” factory halted operations, but there was no chemical release and the fire was eventually put out, authorities in the city of Gorlovka said.

The plant was struck on Thursday afternoon by two missiles from Ukrainian “Uragan” multiple launch rocket systems (MLRS), Gorlovka Mayor Ivan Prikhodko said on Telegram. The rockets were allegedly loaded with cluster munitions, which exploded and started a fire at the electrical substation inside the “Stirol” plant and on the roof of the nearby “Transammiak” factory.

“Stirol” director Vasily Agarkov told local media that the factory halted operations until the fire was extinguished. Agarkov said that about 40 cluster bombs were scattered inside the factory, but that there was no risk of a chemical release. There were no reports of casualties.

Donetsk People’s Republic (DPR) emergency services said they received a fire call shortly after 6 pm local time, and it took the firefighters until 7:45 to localize the blaze.

This was the second artillery attack on “Stirol” this month. On August 12, Ukrainian shelling, as claimed by DPR officials, also caused a fire at the plant, hitting a warehouse with construction materials.

Gorlovka is located northeast of Donetsk city, with heavy fighting currently going on north and west of the city between Russian and DPR forces on one side, and Ukrainian troops on the other.

Before the conflict, “Stirol” used to be one of Europe’s largest producers of mineral fertilizers, accounting for 3% of the global export of ammonia and related compounds.

Now only one works

The head of the administration of the Zaporozhye region, Yevgeny Balitsky , said that two power units of the Zaporizhzhya nuclear power plant were disconnected from the network after shelling by the Armed Forces of Ukraine, which provoked a short circuit on power lines. One unit is currently in operation.

“Today, as a result of a strike by the armed formations of Ukraine on power lines in the area of ​​the Zaporozhye NPP, the territory of the security zone of the 750 kV overhead line caught fire. The fire provoked a short circuit on power lines,” Balitsky said on Telegram.

At the moment, power supply to all cities and districts of the Zaporozhye region has been restored. Previously, the region was partially de-energized due to the shelling of the Ukrainian military, which caused a fire on the territory of the ZNPP.

Earlier, Readovka wrote that the State Duma Council called The UN and the IAEA demand that Kyiv immediately stop shelling the Zaporizhzhya NPP.

Security systems have been activated at the Zaporozhye nuclear power plant after a power outage, which temporarily left the facility without electricity, members of the Russia-backed administration in the Ukrainian region have claimed.

The plant has since been connected to an alternative source of power, according to officials.

The blackout is said to have been caused by massive wildfires in the area, which were started by Ukrainian shelling, theу said.

Fires, which have engulfed parts of the steppe and woods surrounding the city of Energodar, led to short-circuits in the local grid, leaving not only parts of Zaporozhye region without power, but also the neighboring Kherson region.

The head of the pro-Russian military-civil administration of Energodar, Yevgeny Balitski, has been quoted by media as saying: “according to preliminary information, because of massive shelling by the Ukrainian armed forces, which has continued since last night, fields and undergrowth caught fire. This led to a short-circuit in the grid.”

The Zaporozhye Nuclear Power Plant is the largest facility of its kind in Europe. It was seized by Russian forces in early March, soon after Moscow launched its military offensive against Kiev. Since then, the country’s National Guard and Nuclear, Biological and Chemical Defense Troops have been guarding the site, with Ukrainian staff continuing to operate the plant.

Over the past month, Russia has repeatedly accused Ukrainian forces of shelling the nuclear power plant, damaging some of the equipment and buildings. Moscow has warned that Kiev is risking a nuclear incident on a similar scale as the 1986 Chernobyl disaster or even worse.

Ukraine, in turn, strongly denies its military is targeting the facility, and accuses Russian troops of deliberately shelling the plant to frame pro-Kiev forces. Moreover, Ukrainian officials and some of their Western supporters claim that Russia is using the plant as a military base, hiding its personnel and hardware on its grounds.

Russian officials, for their part, have repeatedly called on the International Atomic Energy Agency (IAEA) to send inspectors to the facility, saying that such a mission would corroborate Moscow’s version of events.

About Those Ukrainian Attacks on Zaporozhye Nuclear Plant, Crimea