ER Editor: Readers may also be interested in this short piece with accompanying video from Front Nieuws –

(Videos) Devastation in Bakhmut: Over 10,000 Ukrainian Soldiers Dead in the Biggest Battle of the War – Troops Surrounded and Bombarded by Russians

We recommend viewing this article, which contains a Southfront video update of military action along the Donbass border, as well as some other, revealing videos. It’s clear that Bakhmut is, for some reason, important to Ukraine, despite the fact that its troops are dying in the thousands there and that corruption in the higher ranks is leaving ill-equipped ordinary soldiers to die pointlessly.

Bakhmut is in the Donbass, here: 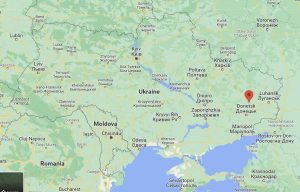 A new round of Wunderwaffen deliveries to Ukraine is taking place. It is unlikely to change the strategic or even operational picture of the war.

The U.S. and its ‘allies’ are engaged in a boil-the-frog operation in which they steadily increase the lethality and complexity of arms and other support they deliver to Ukraine. At some point in time this process will cross Russian red lines. That’s when it will become really interesting …

The newest gimmick to be deployed is the Patriot air defense system likely soon to be followed by main battle tanks:

The U.S. is poised to approve sending a Patriot missile battery to Ukraine, finally agreeing to an urgent request from Ukrainian leaders desperate for more robust weapons to shoot down incoming Russian missiles, U.S. officials said Tuesday. The approval is likely to come later this week and could be announced as early as Thursday, said three officials, who spoke on condition of anonymity because the decision is not final and has not been made public. Two of the officials said the Patriot will come from Pentagon stocks and be moved from another country overseas.

Ukrainian President Volodymyr Zelenskyy pressed Western leaders as recently as Monday to provide more advanced weapons to help his country in its war with Russia. The Patriot would be the most advanced surface-to-air missile system the West has provided to Ukraine to help repel Russian aerial attacks.

During a video conference on Monday, Zelenskyy told host Germany and other leaders of the Group of Seven industrial powers that his country needed long-range missiles, modern tanks, artillery, missile batteries and other high-tech air defense systems to counter Russian attacks that have knocked out electricity and water supplies for millions of Ukrainians.

He acknowledged that, “Unfortunately, Russia still has an advantage in artillery and missiles.”

Well, yes, the artillery advantage the Russian army has in the current battle for Bakhmut is nine to one or even higher:

“For every artillery piece we have, they have nine,” said one soldier.

NATO no longer has the equipment and ammunition reserves to change that.

As for the Patriot, the “Phased Array Tracking Radar to Intercept on Target”: Training for them takes quite some time and unless Ukrainians have already been secretly trained on them for several months, they will have to be deployed with NATO soldiers or ‘former’ soldiers to have any effect:

Asked about training, Brig. Gen. Patrick Ryder, the Pentagon press secretary, said that in general the U.S. takes those needs into consideration when providing complicated weapons systems to Ukraine, such as the High Mobility Artillery Rocket Systems, known as HIMARS. Currently U.S. forces are training Ukrainian troops on a number of systems, including the HIMARS, in other European countries, such as Germany.
…
The entire system, which includes a phased array radar, a control station, computers and generators, typically requires about 90 soldiers to operate and maintain; however, only three soldiers are needed to actually fire it, according to the Army.

The HIMARS missiles, the previous Wunderwaffen, are now routinely shot down by Russian missile and air defense systems:

The Patriot battery to be deployed to Ukraine is likely one of those that the U.S. currently has in Poland. A German Patriot unit will be deployed to replace it.

The phased array radar that Patriot systems use are good but they are also a weakness. They are visible from satellites with Synthetic Aperture Radar. As researchers found some years ago:

Amid a busy few weeks of nuclear-related news, an Israeli researcher made a very surprising OSINT discovery that flew somewhat under the radar. As explained in a Medium article, Israeli GIS analyst Harel Dan noticed that when he accidentally adjusted the noise levels of the imagery produced from the SENTINEL-1 satellite constellation, a bunch of colored Xs suddenly appeared all over the globe.

SENTINEL-1’s C-band Synthetic Aperture Radar (SAR) operates at a centre frequency of 5.405 GHz, which conveniently sits within the range of the military frequency used for land, airborne, and naval radar systems (5.250-5.850 GHz)—including the AN/MPQ-53/65 phased array radars that form the backbone of a Patriot battery’s command and control system. Therefore, Harel correctly hypothesized that some of the Xs that appeared in the SENTINEL-1 images could be triggered by interference from Patriot radar systems.

Using this logic, he was able to use the Xs to pinpoint the locations of Patriot batteries in several Middle Eastern countries, including Qatar, Bahrain, Jordan, Kuwait, and Saudi Arabia.

bigger
While SENTINEL-1 images of Ukraine will now likely be censored, there is no need for Russia to use those. It has its own SAR systems:

Kondor, GRAU index 14F133, is a series of Earth imaging or military reconnaissance satellites developed by NPO Mashinostroyeniya for the Russian Aerospace Defence Forces which in 2015 became the Russian Space Forces and export customers.
…
Kondor satellites are equipped to carry either synthetic aperture radar or electro-optical imaging payloads, with the first satellite, and are launched using the Strela carrier rocket, developed by NPO Mashinostroyeniya from retired UR-100 NUTTKh missiles.

Process the SAR data, look for ‘noise’ crosses, program the coordinates into a number of suicide drones of Iranian design and send them off. This should take no more than an hour. The Russian Reconnaissance Strike Complex is designed to do that:

Will the Patriot radar move during the Russian reaction time interval between reconnaissance and strike? I have my doubts.

Wikipedia says that a Patriot battery costs about $1 billion. The radar is the thing that makes these so expensive. Each of its missile costs about $3 million. The suicide drones are maybe $10,000 each. Now do the math …

The most modern missiles the Patriot system uses have a maximum reach of some 60 kilometer (37 miles). One battery can thus cover a bubble with a 120 kilometer diameter. It may be good for Kiev or Odessa but is nothing that will solve the general military problem Ukraine has.

The Russian forces are superior in technology, personnel and fire power. There is no chance, and never has been, for Ukraine to win that match. No Wunderwaffen, British marines with sea drones or U.S. Patriot systems, will change those basic facts. 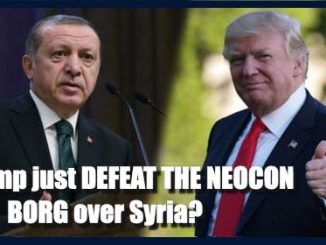 The Real Reason Trump Decided To Pull Out of Syria