Up to 5,000 tractors descended upon the German capital on Tuesday to protest the government’s latest agricultural policies and environmental protection regulations which farmers claim are too restrictive.

German authorities estimate somewhere in the region of 5,000 tractors and 10,000 farmers entered Berlin in a slow-moving convoy, bringing the capital to a relative standstill at certain points. The protesters eventually gathered at Berlin’s iconic landmark, the Brandenburg Gate. 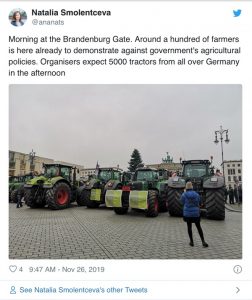 Chancellor Angela Merkel’s government made the proposals back in September to curb the use of pesticides and herbicides to better protect the country’s insect populations, while also placing limits on the use of fertilizers to protect Germany’s groundwater.

Disgruntled farmers feel there should be consultation and cooperation between conservationists, environmentalists, farmers and the government to create policies that are effective at protecting the environment while maintaining German agricultural competitiveness.

While Merkel agreed in principle and talks are scheduled to begin at the start of December, these are not the first such protests by farmers in recent weeks.

ALSO ON RT.COM ‘No farm, no food, no future!’: Farmers clog traffic in Hamburg with 4,000 tractors, reject ‘scapegoating’ by govt (VIDEO)