The protests seen in France and the interference in the domestic politics of Venezuela highlight Western double standards, which stand in contrast to the respect for international law maintained by China, India and Russia.

In France on November 17, 2018, hundreds of thousands of citizens, angered by the diminishing quality of their lives, the social iniquity in the country, and the widening gap between rich and poor, took to the streets in protest. The protests can easily be encapsulated in the following slogan: “We the people against you the elite.”
.
This slogan has been a recurring theme throughout the West over the last three years, shaking up the British establishment with the pro-Brexit vote, discombobulating the United States with Trump’s victory, overturning Italy with the Lega/Five-Star government, and bringing Merkel’s star crashing down in Germany. Now it is the turn of Macron and France, one of the least popular leaders in the world, leading his country into chaos, with peaceful protests drawing a bloody response from the authorities following ten weeks of unceasing demonstrations.
.
In Venezuela, Western elites would like us to believe that the situation is worse than in France in terms of public order, but that is simply a lie. It is a media creation based on 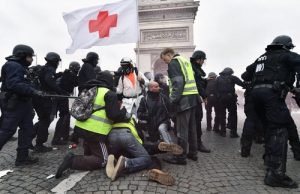 misinformation and censorship. In Europe, the mainstream media has stopped showing images of the protests in France, as if to smother information about it, preferring to portray an image of France that belies the chaos in which it has been immersed for every weekend over the last few months.
.
In Caracas, the right-wing, pro-American and anti-Communist opposition continues the same campaign based on lies and violence as it has customarily conducted following its electoral defeats at the hands of the Bolivarian revolution. The Western mainstream media beams images and videos of massive pro-government Bolivarian rallies and falsely portrays them as anti-Maduro protests. We are dealing here with acts of journalistic terrorism, and the journalists who push this narrative, instigating clashes, should be prosecuted by a criminal court of the Bolivarian people in Caracas. Instead, the West continues to tell us that Assange is a criminal for doing his job, that Wikileaks is a terrorist organization for publishing true information, and that Russia interfered in the US elections. All of these deceptions are carried out by the same Western journalists, media publications and US government that are currently plying their mendacious trade in Venezuela. What double standards!
.
In Venezuela, the people are with Maduro, and before him they were with Chavez. The reason is simple and easy to understand, having everything to do with the economic policies adopted by the 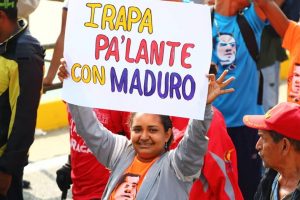 government of Caracas, which during just over a decade in power, reduced the level of poverty, illiteracy and corruption in the country, lengthening life expectancy and increasing access to education. The leftist model followed by dozens of South American countries during the 2000s favored the poorest layer of society by redistributing the wealth of the top 1%.
.
The contrast between events in France and Venezuela perfectly encapsulate the state of the world today. In France, the people are fighting against Macron, austerity policies and globalist superstructure. In Venezuela, the the opposition (synonymous with the rich population) is leveraging external interference from the governments of Colombia, Brazil and the United States to try and overthrow a government that enjoys the full support of the people thanks to its domestic policies. Even as many in 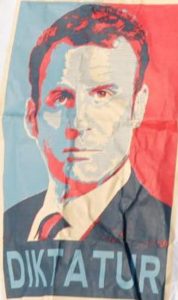 France are not conscious of it, they are actually protesting against an unjust, ultra-capitalist system imposed by the globalist elite of which Macron is a major cheerleader. In Venezuela, the ultra-capitalist class, backed by the transnational globalists, seek to overthrow a socialist system that places the interests of the 99% before those of the 1%.
.
Maduro has an approval rating of around 65%, higher than any European or American leader. In France, Macron’s approval ratings hover around the single digits, with only Ukraine’s Poroshenko scoring lower. Poroshenko, quite naturally, dutifully joined the chorus of those egging on a coup against the Bolivarian government of Maduro, even as he leads a country besieged by out-of-control neo-Nazis.
.
The protests in France are driven by two decades of impoverishment as a result of European diktats that prescribe austerity and the need to strip the middle class of its wealth to favor the influx of cheap labor. This strategy of reducing labor costs has already been employed in other countries, the aim being to increase profits for multinational companies without the need to relocate production to low-wage countries. The large-scale importation of exploited people from Africa has continued unabated for years, and now the average French citizen not only finds himself in an increasingly multi-ethnic society (with the government giving little incentive for newcomers to integrate) but also sees his lifestyle suffering due to a combination of lower wages and increasing taxes, making it increasingly difficult for him to make ends meet every month.
.
In Venezuela, the crisis stems entirely from external interference coming from the United States, which has economically strangled Venezuela for over a decade. The methodology is that of sanctions and economic destabilization, the same as has been applied against Cuba over more than 50 years, albeit in that case unsuccessfully. Chavez and Maduro have drawn the ire of the global elites by blocking their international oil corporations from access to Venezuela’s oil reserves, the largest in the world. It must be noted that Venezuela is one of the most important members of OPEC, with Riyadh and Moscow advancing the creation of an oil conglomerate known as OPEC +, with Russia, Saudi Arabia and Venezuela as influential members. The West is of course deploying the “democracy promotion” canard to justify its shenanigans in Venezuela, one of its go-to tactics drawn from its well-used PSYOP toolkit.
.
The French and Venezuelan situations also serve as a barometer for the general state of international relations in a multipolar context. While the US has little trouble interfering in Venezuela’s internal affairs, Russia, China and India employ a completely different approach, maintaining a uniform foreign-policy line on Paris and Caracas. They express total support for their Bolivarian ally, which is an important source of trade for New Delhi, a strategic military-oil partner for Moscow, and a major seller of crude oil for Beijing. Each of the three Eurasian powers has every interest in actively opposing Washington’s attempts to subvert the Maduro government, given that Venezuela performs important regional-stability functions, as well as, above all, offering these Eurasian powers an opportunity to respond asymmetrically to Washington’s destabilization efforts in Asia, the Middle East and Eastern Europe. There has been talk of creating particular synergies between Venezuela and other countries similarly struggling to free themselves from under Washington’s boot. China and Russia’s sending of naval ships and military aircraft to the Americas, violating the Monroe doctrine, represents a riposte to the continued pressure placed on the borders of Russia and China by the US and NATO as part of their containment strategy.
.
************

The Declining Empire of Chaos Is Going Nuts Over Iran