The U.S. As the Globe’s Judge, Jury & Executioner

Qassim Soleimani, an Iranian major general, was assassinated by a U.S. drone air strike, at the Baghdad International Airport (BIAP). The Iraqi-born Soleimani was traveling with one Abu Mahdi al-Muhandis.

Like Soleimani, al-Muhandis was an Iraqi, born and bred. He was even elected to the Iraqi Parliament, in 2005, until the U.S. intervened. (Yes, we intervene in other nations’ elections.) The consensus in our country is that “Soleimani deserved to die.” That’s the party-line on Fox News—and beyond. It’s how assorted commentators on all networks prefaced their “positions” on the Jan. 3 killing of this Iraqi-born, Iranian general.

Even Tucker Carlson—the only mainstream hope for Old Right, anti-war, America-First columns like this one—framed the taking out of Soleimani as the killing of a bad guy by good guys:

“There are an awful lot of bad people in this world. We can’t kill them all, it’s not our job.”

However you finesse it, the premise of Tucker’s assertion is that the American government, and the smart set who live in symbiosis with it, gets to adjudicate who’s bad and who’s good in the world.

The debate is only ever over whether the U.S. government should or shouldn’t act on its divine rights as transnational judge, jury and executioner, never over what’s right and what’s wrong.

Stateside, the only inquiry permissible is a cost-benefit calculus. Will the assassination of Soleimani, a military official of a sovereign state, and an avid and effective slayer of Islamic State terrorists—pay strategic dividends for America in the long run?

This is crass pragmatism bereft of principle. It’s currently on display everywhere, even surfacing on BBC News, where a female analyst, an American, was deploying the childish “bad man” meme to outline America’s Disneyfied foreign policy.

This angels-and-demons production always starts with the prototypical evil dictator who was alleged to be messing with his noble people, until the avenging, angelic empire sent a drone to the rescue.

Again, even Tucker, whose antiwar credentials in recent years have been impeccable, conceded that this Soleimani guy probably needed killing, which is the same thing Iraqis old enough to remember America’s destruction of Iraq, circa 2003, would say about President George W. Bush, Dick Cheney, Don Rumsfeld and Ms. Rice.

So, who’s right? Or, is blind patriotism predicated on accepting that it is up to the U.S. government and its ruling elites to determine who lives and who dies around the world?

“Soleimani deserved to die,” an atavistic bit of jingoism, made by Republicans and Democrats alike, on Fox News and on CNN—it holds true only if you believe that the U.S. government is the keeper of the flame of an immutably just, universal code of law, which it is deputized to uphold, wherever it takes-up residence.

Such a chauvinistic impulse is true only if you believe that the U.S. government’s might gives it the right to be universal judge, jury and executioner, deciding who may live and who must die the world over.

As to whether the U.S. government has a right to eliminate an Iranian state actor by declaring him a “terrorist”:

Like it or not, Soleimani was a uniformed official of a sovereign state. He was the equivalent of our Special Operations commander. 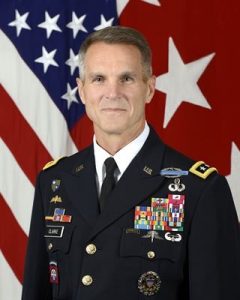 We Americans would not tolerate it were Iranians to designate America’s Special Operations commander, Gen. Richard D. Clarke, a terrorist.

Moreover, if Iranians took out America’s Special Ops commander somewhere in North America—which is analogous to the assassination of Soleimani—Americans would consider it an act of war by Iran.

Soleimani was the commander of the Revolutionary Guards’ clandestine and regional operations arm, the Quds Force. Iranians look upon him as we Americans view the commanders of our clandestine Special Operations forces the world over.

To repeat: The crucial difference between Iran’s Quds Force and America’s Special Operations forces (SOF) is that the former is regional, the latter global.

As I write, America’s SOF, upwards of 8,300 commandos, are engaged in secret operations the world over. Unknown to all but a few Americans, “U.S. commandos deploy to 149 countries—about 75 percent of the nations on the planet,” reports investigative journalist Nick Turse. Expect that by the halfway mark of this year, “U.S. Special Operations Command (USSOCOM or SOCOM), America’s most elite troops, will have already carried out missions in approximately 133 countries.”

“If Iran should not be allowed to interfere in neighboring countries,” pondered Sara, an Iranian mourner interviewed at Soleimani’s million-strong funeral, “why should Americans be allowed to come to our region all the way from the other side of the Earth?”

Correction: Soleimani patrolled only Iran’s very dangerous neighborhood. His mission was far more modest and nationalistic than that of the U.S. government, which bestrides the globe, arming and training foreign troops all over it.

As to the “imminent danger” a single individual, Soleimani, was said to pose to “American lives”: Arrayed against the veracity of the intelligence to that effect are Republican Sens. Mike Lee and Rand Paul. They characterized Wednesday’s intel briefing as positively “insulting”; “the worst briefing” they had received.

No wonder. The intelligence was produced and pushed by the same spooks who’ve been agitating against President Trump and all vestiges of his original “America First” plank.

The intel justification for the Soleimani assassination came from the same intelligence community that cooked up the anti-Trump Russia monomania and the WMD-in-Iraq casus belli.

These disgraced sources now insist that Soleimani was planning future, precision strikes—nefarious atrocities against U.S. soldiers—and, therefore, needed to be dispatched right away.

However, other more credible source, including Rand Paul’s dad, allude to Soleimani’s involvement in a diplomatic mission which was underway between Iraq, Iran and Saudi Arabia, and would have cut out the U.S. as middleman.

Skepticism aside, when we accept U.S. state aggression based on iffy, prior-restraint arguments, then aggress we must ad absurdum. Consider: Between 1975 and 2015, Saudi Arabian Sunnis murdered 2,369 Americans in the homeland, to Iran’s zero. When it comes to the lives of American civilians, at least in recent decades, the Saudis (Trump’s new BFFs), not the Iranians, have blood on their hands.

Based on the erroneous prior-restraint reasoning, and our putative, divine American rights as judge, jury and executioner—we could confine all Saudi-Arabian Sunnis to camps, for the purpose of “reeducation.” It’s what China is doing to its Muslim minority.

So as to survive the onslaught of the Sunni fundamentalist majority, the endangered Alawite minority in Syria has formed an alliance with Shia Iran, also a marginalized minority within the Ummah. The Shia-Alawite alliance has been good for Christians in Syria.

But Saudi Arabia doesn’t give a dried camel’s hump about Christians or American casualties. They have managed to skilfully enlist the West in a proxy Sunni-Shia religious war, also Riyadh’s ultimate aim.

Despite a campaign of “America First,” and much like the Bushes and Clintons before him, the president has decided to side with Sunni Islam while demonizing the Shia.

Ilana Mercer has been writing a weekly, paleolibertarian column since 1999. She’s the author of Into the Cannibal’s Pot: Lessons for America From Post-Apartheid South Africa (2011) & The Trump Revolution: The Donald’s Creative Destruction Deconstructed” (June, 2016). She’s on Twitter,Facebook & Gab. Latest on YouTube: “How Democracy Made Us Dumb. 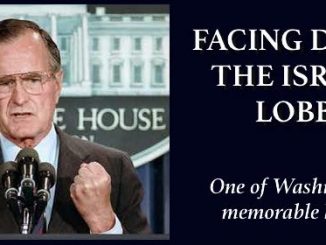 When George Bush, Sr. took on the Israel lobby and paid for it

The New Inequality: the Decline of the Working Class Family