The second wave is coming, but it is the wave of suicides

In France, approximately 9,000 deaths by suicide were recorded in 2019 by Santé Publique France. Lockdowns, and especially the second one, are likely to cause the number to explode. We had already reported this known risk, but unfortunately current events confirm our fears: the wave of suicides is beginning to break.

This is only the beginning

Suicides secondary to trauma occur after the crisis, so we are only at the beginning.

Father Stephan Lange, who had been living in France for twenty-six years, became the parish priest of Saint-André, in Reims. He is alarmed on FR3 (ER: media):

“I had never experienced this. In two weeks, I celebrated five funeral masses following suicides: a mother of three children, a twenty-five year old girl, a forty year old mother of six children, a fifty-two year old father and an elderly person”.

In Creuse, suicides have almost doubled

According to the public prosecutor’s office in Guéret, the number of suicides has almost doubled since the beginning of the lockdown. “Usually, there are one or two suicides per week,” says the prosecutor’s assistant. “Now, we are at two or three per week. Even if we’re looking at small numbers. Since the beginning of lockdown, the trend has been upward, with more situations of isolated, vulnerable, rather elderly people dying by firearms or hanging.”

Dr Navarre, psychiatrist at the CH du Rouvray in Sotteville-lès-Rouen, reminds us in an article published on March 25, 2020 in the newspaper “20 minutes” what everyone already knows: “lockdown is not harmless on a psychological level (…), some people will feel an impression of emptiness”, which evokes “the anguish of confinement”.

Dr. Bocher, head of department at the Nantes hospital, told FR3 Pays de la Loire on March 30 “Coronavirus: lockdown goes against the principles of care in psychiatric hospitals (…) We do not know the consequences of lockdown on people prone to anxiety” “Psychotropic drugs may cause breathing difficulties”, warns Dr. Rachel B. “Blessed bread for covid-19”, he adds.

This risk of suicide from lockdown spares no one, even young people who are a priori well on their way in life, such as this HEC student who committed suicide on his campus in the Paris region. Nor do retired people like this woman from Sainte-Radegonde.

A survey conducted between March 23 and 25 by BVA on behalf of Public Health France among 2,000 people: “revealed that 27% of respondents are in a state of anxiety. This figure compares to the 13.5% measured outside the epidemic period” in the 2017 Health Barometer.

And it is observed in all countries where lockdown has been imposed: USA, Great Britain, Australia and India.

The various reasons for the malaise

Teenagers deprived of their first love are completely depressed, as the telephone and even Skype and/or FaceTime, Instagram or WhatsApp cannot replace the intimacy they were beginning to discover. They even miss their school and their real-life teachers, whom they often criticized, so badly.

The mental consequences on usually healthy people, sometimes psychologically fragile and convinced that they are facing an imminent danger of death, are significant and will often be long-lasting. The duration of quarantine is significantly related to the increase of symptoms in all studies. The number of decompensated persons will increase with the duration of lockdown and the daily reinforcement of hysteria and psychosis maintained by the Ministry of Health, the President or his Prime Minister and slavishly disseminated by the media.

“The history of the invocation of quarantine measures is tarnished by threats, widespread fear, lack of understanding, discrimination, economic hardship and rebellion. (…) Quarantine can create serious psychological, emotional and financial problems for some people. This study, however, only focused on the quarantine of sick people who, because of this, understand the justification for their isolation and knew the limited duration of it.

The after-effects of the indiscriminate house arrest of the Italian, Spanish and French populations (less conditioned to dictatorship than China) will certainly be much heavier.

Suicides linked to the economic crisis of lockdown

According to an Ifop survey for the Jean-Jaurès Foundation carried out at the end of September and summarized in Le Figaro, business leaders, craftsmen, young people and the unemployed are the populations most at risk of suicide. The survey identifies three socio-professional categories that have been severely affected: business leaders, 27% of whom had the real intention of committing suicide in 2020; craftsmen and tradesmen, 25% of whom also wished to do so; and the unemployed (27%). Among the craftsmen and tradesmen who have considered a suicide attempt, 42% say they have taken action, with hospitalization. “This proportion represents the highest rate in our survey and shows the particular seriousness of these situations, which should alert the public authorities,” the authors point out.

In a report released on May 8, U.S. researchers say there are three main factors at play in the increase in desperate deaths related to lockdown:
– Economic failure with massive unemployment
– Compulsory social isolation for months and possible residual isolation for years
– Uncertainty caused by the sudden emergence of a new microbe.

To determine their projection they used historical indices of similar situations in the past and in particular the Recession from December 2007 to June 2009 as a reference. During this period, a surge in unemployment contributed to deaths by suicide and deaths by drug overdose.

In France, successive confinements place us in the worst situation of economic recovery and it is 25,000 deaths of despair that we should fear.

Blind lockdown does not reduce Covid-19 mortality but causes many collateral victims through lack of care and future deaths of despair.

When will the government put an end to this stupid measure which carries out not only a real economic suicide, but also a human one in the most active categories?

Evidence From Around the World Suggests COVID Vaccines Are Leading to More Deaths and Infections: French Medical Doctor

POLL: After The Macron Blip, Majority of French Show Hostility to Globalism 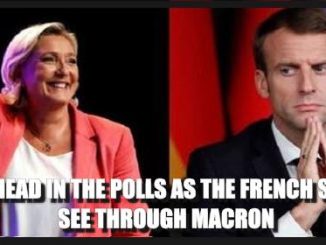