The Genocide in Rwanda or America’s war on France

Soros, France and the War on Africa [Part 4]

“France does not know it, but we are at war with America. Yes, a permanent war, a vital war, an economic war, a war without death, so it seems.
Yes, they are very tough, the Americans. They want power in the world, without sharing. It’s an unknown war, a permanent war, without any apparent deaths but it is a war to the death!”
François Mitterand

Soros-funded ‘civil society’ organizations currently operate throughout Africa, where pseudo-pan-Africanist and anti-imperialist rhetoric is being invoked to overthrow entrenched leaders who have, for the most part, facilitated Vincent Bolloré’s rise to prominence. Paul Biya in Senegal, Abdoulaye Wade in Senegal, Ali Bongo Ondimba in Gabon, Denis Sassou-Nguesso in Congo Brazzaville, Joseph Kabila in the Democratic Republic of Congo, Blaise Compaore in Burkina Faso, Laurent Gbagbo of the Ivory Coast, Pierre Nkurunzizza of Burundi — all have been targeted by the agencies of Soros. Some of the leaders such as Pierre Nkurunzizza have done a remarkably good job at stabilizing and developing their countries. Others have been mediocre. But what many of these leaders have in common is that they are not considered ideal regional prefects of the global empire, the emerging World State.

Since the fall of the Soviet Union, the United States has been increasingly active in Africa – where it has sometimes been in conflict with France. In order to understand another important aspect of the ideological war on Bolloré’s African empire, we need to make a brief detour through Rwanda, as the conflict illustrates better than any other, the subordination of France to the United States.

In 1994 Rwanda was invaded by the Rwandan Patriotic Army (Forces Patriotiques Rwandaises, FPR). The army was led by Major General Paul Kagame (pictured) and was the culmination of a low-intensity terrorist campaign conducted from the RPA’s bases in Uganda from 1991-1994. Kagame was a member of the Tutsi minority who had been exiled after the Hutu revolution in 1958 during the colonial period; the Belgian authorities favored the taller, light-skinned Tutsis over their Hutu counterparts. Until the violence of the 1990s, Rwanda had been a French and Belgian zone of influence in Southern Africa. 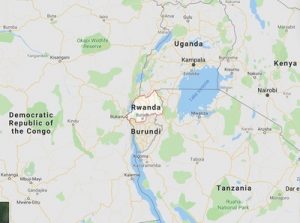 However, American, Israeli and British mining corporations wanted to gain control of the mineral-rich Great Lakes region (ER: to the west of Rwanda – see map), and Paul Kagame, at that time an intelligence officer in the Ugandan Defence Forces, would be their man. Kagame was trained by the Pentagon in Fort Leavenworth, USA. During his sojourn in America, he forged close links with President Bill Clinton and other top US officials.

The RPA’s invasion of Rwanda was preceded by the assassination of Rwandan president Juvenal Habyarimana and Burundian president Cyprien Ntaryamira by Kagame’s forces on 6 April 1994. It is estimated that 800,000 people died in the war that ensued – 200 of whom were Tutsi, yet the media would ignore the massacres of Hutu and claim that most of the victims were Tutsi. As in so many other conflicts, good and bad in the Rwandan civil war depends on which group is being supported by the West.

After the war, the US military-industrial-media-intelligence complex produced copious films, documentaries and news reports claiming that Kagame “put an end to the genocide against the Tutsis”, when in fact it was Kagame’s forces who were responsible for the mass killing – of predominantly Hutus but also Tutsi and Twa.

The myth of the Rwandan genocide and the “indifference” of the international community led to the formulation of UN peace-keeping doctrine called “responsibility to protect” (R2P). Henceforth, the UN or NATO would have the right to intervene militarily in any conflict in order to “stop massacres.” Senior British diplomat Robert Cooper would describe it as the ‘new liberal imperialism’.

The challenge to the postmodern world is to get used to the idea of double standards. Among ourselves, we operate on the basis of laws and open cooperative security. But when dealing with more old-fashioned kinds of states outside the postmodern continent of Europe, we need to revert to the rougher methods of an earlier era – force, pre-emptive attack, deception, whatever is necessary to deal with those who still live in the nineteenth century world of every state for itself. Among ourselves, we keep the law but when we are operating in the jungle, we must also use the laws of the jungle. In the prolonged period of peace in Europe, there has been a temptation to neglect our defenses, both physical and psychological. This represents one of the great dangers of the postmodern state.

The US proxy war in Rwanda was described by Michel Chossudovsky as a secret war between the United States and France. In post-war storytelling, the Hutu regime Kagame overthrew was demonized. Paris had supported the legitimate government in accordance with security treaties signed between France and Rwanda. Ever since the genocide, the French media have imposed the US version of events on the public. The French are told that they were complicit in genocide. An entire generation in France has been brainwashed into believing that France is responsible for the Rwandan genocide, that President Mitterand’s indifference or cynical strategic interests prevailed over human rights. Rwanda has become a Holocaust phenomenon where the entire French nation is somehow guilty. There is even a motion to pass laws criminalizing any questioning of the official story. 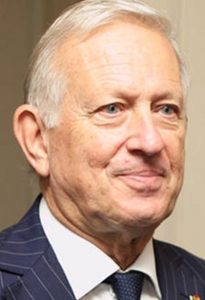 Michel Roussin (pictured), a high-ranking French intelligence officer, was in the region at the time. A member of his team admitted that the French government were delivering arms to the Rwandan Armed Forces, who were defending the country from the US/Israeli-backed FPR of Paul Kagame.

Michel Roussin worked for the Bolloré Group, playing an important role in the company’s African success. Given Roussin’s role in defending French interests against those of the United States during the Rwandan war and his close association with Bolloré, one begins to see how such elements of a bygone era of the French empire would complicate the anti-French narrative of Anglo-American imperialism in the era of Macron.

The result of this pernicious mythology has seen the total subordination of France to US/Israeli interests, as well as France’s return to the commandment of NATO and full participation in the destruction of Libya and Syria on behalf of terrorist groups similar to those of Kagame’s FPR. Today, English has replaced French in Rwanda, and the French government has accepted the US version of the Rwandan genocide. In spite of numerous important studies of the Rwandan conflict by historians Charles Onana, Pierre Péan, Bernard Lugan and others, the French media continues to call anyone who questions the US version of events as “negationist.”

But imperialism is not finished with the region just yet: globalist networks in the EU and the United States have been destabilizing neighboring Burundi (see map above) since 2015. Media lies have been one of the main weapons against the country. The Burundian government have taken the France 3 Television to court for lying about the conflict. France 3 has admitted lying and have apologized.

Much of the destabilization of Burundi is being orchestrated in Rwanda, with backing from the West.

The tension between Hutu and Tutsi in Burundi is stoked by international agencies. The country is a strategically important state for control of Central and East Africa, where the West is challenging Chinese interests.

Kagame’s regime has imposed English as the official language of Rwanda. As if in an attempt to drive another nail into the coffin of French, in October 2018 President Emmanuel Macron nominated Rwandese Louise Mushikowabo (pictured) as head of the Organization of Francophonie. It is part of Macron’s determination to subordinate France to Anglo-Saxon globalist interests.

Former UN Secretary-General Kofi Annan was instrumental in formulating the doctrine of ‘Responsibility to Protect’. The genocides in Yugoslavia and Rwanda — both instigated by the US — were the main justification for the new interventionist policy. Kofi Annan became known as the Secretary-General most concerned about human rights.

Because France is the “home of human rights”, French strategic interests in Africa would henceforth be subordinated to the interests of the emerging global state. But the process would involve inculpating France in genocide in order to traumatize the French public into supporting not only the destruction of African sovereignty but rather the destruction of the French nation itself.

In the next segment of our series, we will explore just what is at stake in the destruction of France, and why ideological and cultural differences among the ruling class are largely, though not exclusively, the consequence of an underlying material reality. 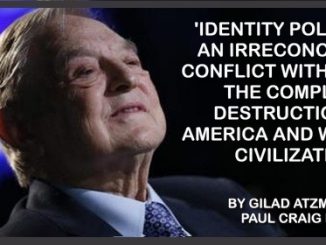 Brexit Is All About Making Israel Greater