ER Editor: Not being an economist ourself, it’s wonderful to get one to explain things clearly. Charles Hugh Smith is particularly good at this.

The phrase he uses below, ‘dependency on credit-fueled investment and consumption,’ means living beyond your means in ordinary parlance. But it’s been a deliberately developed SYSTEM of finance which, as Smith explains, exploits (through debt) countries and taxpayers in step by step fashion. One layer of countries is used in this way (peripheral countries in Europe), given limitless amounts of debt on which interest must always be paid; then the second layer gets ensnared, the richer nations or core nations, who pick up the slack of the destructively indebted peripheral nations; until the debt-fuelled model finally fails, collapsing in on itself. The taxpayers of the richer nations will end up footing the bill for all the ever-increasing debt that’s been created, and whose interest payments continue to need servicing, becoming impoverished given enough time. Every citizen becomes a ‘feudal serf’.

This is an adequate description of the EU, and how it has been structured to exploit different nations over time through debt-driven, PRIVATE financing. But as he explains, the entire global system is victim to this.

The EU’s Crisis Is Global

The EU’s crisis isn’t limited to energy. It is a manifestation of the global breakdown of Neocolonialism, Financialization and Globalization.

The European Union (EU) was seen as the culmination of a centuries-long process of integration that would finally put an end to the ceaseless conflicts that had led to disastrous wars in the 20th century that had knocked Europe from global preeminence.

ER: At least, that was the pretext … Who created and funded both sides of those ‘ceaseless conflicts’? Cui bono?

Wary of the predations of the U.S. and rising Asian powers, European nations sought the economic and diplomatic strength of a confederation that would be greater than the sum of its parts, a union that would restore Europe’s rightful place as a global power.

This worthy goal was undermined by the destructive dynamics of the past forty years: Neocolonialism, Financialization and Globalization.

These dynamics are unstable due to their internal contradictions. In classical colonialism, the Core dominates the Periphery with force, extracting economic value by exploiting the subject states’ commodities and forcing the colonies to buy the valued-added finished goods produced by the colonial power’s domestic economy.

This extractive model was at odds with the liberal worldview of the colonial powers which held self-rule and open markets as necessary to stable prosperity. The contradictions of classical colonialism led to its collapse as colonies broke free and the colonial powers were forced to navigate a more open global economy.

Beneath the glossy vibe of strength through unity, the EU institutionalized a Neocolonial Model in which some EU members are more equal than others, a divide that was starkly revealed in the debt crisis of 2011-2012.

In Neocolonialism, the forces of financialization (debt and leverage controlled by State-approved banking cartels) are used to indenture the local Elites and populace to the banking center: the peripheral Neocolonials borrow money to buy the finished goods sold by the Core, doubly enriching the center with 1) interest, and the transactional skim of financializing assets such as real estate, harbors, etc., and 2) the profits made selling goods to the debtors.

The Periphery’s neocolonial status was starkly revealed by the debt crisis: the assets and income of the Periphery flowed to the Core as interest on the private and sovereign debts that are owed to the Core’s commercial and central banks.

This was the perfection of Neocolonial Neofeudalism. The Periphery nations of the E.U. are effectively neocolonial debtors of the Core countries’ banks, and the taxpayers of the Core nations are now feudal serfs whose labor is devoted to making good on any bank loans to the Periphery that go bad. (ER: So first you land the peripheral countries in financial trouble. Then when it all goes PREDICTABLY bad, you leave the taxpayers of the richer countries footing the bill. To the banks. It’s a system designed to fail, to the benefit of the banks. Until even they collapse.)

In effect, the importing Periphery nations were given the same expansive credit limits of their Mercantilist siblings. In a real-world analogy, it’s as if someone prone to financing life’s expenses with credit was handed a no-limit credit card with a low interest rate, backed by a guarantee from a credit-averse cousin.

Credit duly expanded oh-so profitably, but the contradictions eventually unravel the utopia: the Periphery borrowers soon borrow more than they can actually support, and the Core has to bail them out without actually writing off any of the debt, as writedowns would crush the profitability of the Core banks.

This is a colonialism based on the financialization of the smaller economies to the benefit of the Core’s financial institutions and Mercantilist economies.

In the EU, the opportunities to exploit captive markets were even better than those found abroad, for the simple reason that the EU itself stood ready to guarantee there would be no messy expropriations or defaults by local authorities, who would decide to throw off the yokes of neocolonization.

The EU attempted to reconcile this intrinsically unstable private-capital/State arrangement– profits are private but losses are public–by shoving the costs of the bad debt onto the backs of the Core’s taxpayers (now indentured serfs).

The profits from the euro arbitrage and Neocolonial exploitation were private, but the costs are being borne by the taxpaying public of both Core and Periphery.

Globalization also has its own set of internal contradictions. Using financialization (credit and all the speculative schemes leverage enables) to boost mercantilist exports and consumerist imports was highly profitable, but both the exporters and importers are now exposed to the inherent vulnerabilities and fragilities of dependency on credit-fueled investment and consumption, and the unstable private-capital/State arrangement–an arrangement that’s coming apart everywhere from the EU to China.

The Neocolonial-Financialization Model has reached its limits globally. There are no more markets to exploit with financialization; the discretionary incomes of the debt-serfs have stagnated to the point they cannot take on any more debt; and the reality that the speculative gains are phantom, and the mountains of debt are unpayable can no longer be masked.

As I endeavored to explain in The Global Power Shift Isn’t West to East–It’s Not That Simple (June 24, 2022), currencies are the bedrock of financialization, and the internal contradictions of the global economy’s credit-currency regime are finally unraveling the illusory stability of currency markets.

The EU’s crisis isn’t limited to energy. It is a manifestation of the global breakdown of Neocolonialism, Financialization and Globalization. No one will be unaffected as the internal contradictions destabilize a global economy that was presented as permanent.

What’s the status quo fix? Cannibalization: The System Is Busy Cannibalizing Itself (August 31, 2022).

My new book is now available at a 10% discount this month: When You Can’t Go On: Burnout, Reckoning and Renewal. If you found value in this content, please join me in seeking solutions by becoming a $1/month patron of my work via patreon.com. 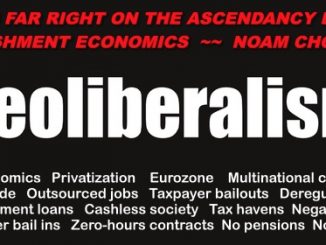