ER Editor: We had published a few days ago on the European Court of Auditors’ report on negotiations around the procurement of vaccines and those famous contracts, especially that of Pfizer, but the article below gives us additional information. See the previous report,

Last week, the European Court of Auditors, many of which are regularly criticized for a lack of assertiveness and influence, published an audit report on the European Commission’s procurement procedures for COVID vaccines. The least we can say is that Ursula von der Leyen does not emerge well from this audit, which we think will feed many attacks, as we explain elsewhere. At this stage, the President of the Commission still refuses to communicate the preparatory documents for the Pfizer negotiation.

We are republishing here the special report of the European Court of Auditors  on the acquisition of vaccines against COVID-19. We have already explained the reaction of the deputy Virginie Joron to this indisputable document, which presents (timidly) the anomalies in the purchasing procedure from which Pfizer benefited.

We summarize this text and quote some tasty extracts.

Vaccine purchases: a ruin for the European taxpayer

The European Court of Auditors begins by comparing the usual procedures for developing vaccines with that used for COVID. The following chart from the report summarizes the problem, and explains the public mistrust:

Between August 2020 and November 2021, the Commission signed 11 contracts with eight vaccine manufacturers, obtaining up to 4.6 billion doses of vaccines (see Table 1) for a total expected cost close to 71 billion euros. The weighted average cost per dose is approximately 15 euros, a figure obtained from the number of doses actually ordered (delivered and to be delivered).

Here is the table summarizing the commands:

As we can see, orders are approaching 5 billion doses… for less than 500 million inhabitants. The proportions are intriguing.

We will read with attention this pearl written by the Court:

A citizen who suffers adverse effects induced by one of the COVID-19 vaccines purchased under the contracts can claim compensation for the damage from the vaccine manufacturer. If the complaint is found to be justified, the Member State which administered the administration of the vaccine will be responsible for compensating the victim and bearing the legal costs of the vaccine manufacturer (compensation). However, this is not the case if the damage or injury is the result of willful misconduct, gross negligence or non-compliance with good manufacturing practice in the EU.

So, it is confirmed that the States bear the legal costs of the laboratories attacked by people who complain about the side effects of the vaccine…

But what is Ursula hiding on Pfizer?

Note this other astonishing admission by the Court on the negotiations with the European Commission:

We have had access to the relevant Commission documents, with the exception of those relating to the participation of the President of the Commission in the preliminary negotiations with Pfizer/BioNTech.

The Court of Auditors also points out that the purchase of vaccines was done according to a special procedure, with new powers attributed to the Commission (as of April 2020, in reality…):

An amendment to the Council Regulation on the provision of emergency assistance within the Union in April 2020 addressed these limitations, authorizing for the first time the Commission to negotiate contracts on behalf of Member States.

The extreme precocity with which the Commission planned a negotiation in place of the Member States in terms of vaccines, here too, is surprising…

A totally abnormal call for tenders

I pass here on the details (important, however) pinpointed by the Court on the way in which the Commission negotiated the invitation to tender as regards vaccine. I especially remember the anomalies of the procedure, very well described here:

First, the vaccine candidate manufacturers and the joint negotiating team had agreed on key elements of future contracts (including prices, quantities and liability) during preliminary negotiations. It was only once these elements had been agreed that the call for tenders was launched, as evidenced by the short time elapsed between the call for tenders and the deadline for submitting the tender documents (10 days).

In other words, the invitation to tender for vaccines was launched after the Commission had chosen its supplier and after it had agreed with him on the price. The call for tenders served to regularize an established situation….

The details given by the Court are also instructive. In particular, this essential reminder should be highlighted:

According to the Commission, the pharmaceutical industry pressured the joint negotiating team to follow the example of the United States, which had relieved companies of responsibility for COVID-19 vaccines.

Again, these assertions speak for themselves.

Regarding the intervention of the President of the Commission, the Court of Auditors is not gentle:

During the month of March 2021, the President of the Commission conducted the preliminary negotiations for a contract with Pfizer/BioNTech. This is the only contract for which the joint negotiating team did not participate at this stage of the negotiations, contrary to what is provided for in the decision of the Commission relating to the acquisition of vaccines against COVID-1939. On 9 April 2021, the Commission presented to the Steering Committee the conditions negotiated between the President of the Commission and Pfizer/BioNTech, and the Steering Committee agreed to launch a call for tenders. The contract, signed on May 19, 2021 (see Table 1), covers the delivery of 900 million doses of vaccines in 2022 and 2023, with the possibility of ordering an additional 900 million doses. It is the largest contract for the supply of COVID-19 vaccines that the Commission has signed, and it will dominate
the Union’s vaccine portfolio until the end of 2023.

We asked the Commission to provide us with information on the preliminary negotiations relating to this contract (the scientific experts consulted and the advice received, the timetable for the negotiations, the minutes of the discussions and the details of the agreed terms). Our request went unanswered.

It could not be clearer: Ursula von der Leyen, in total opacity, and in an obstinate refusal to shed light on the conditions of this operation, assumed powers that she did not have. It has completely circumvented procedures that are nevertheless very questionable by their lightness.

What hides this passage in force which is accompanied by a complete silence on the “preparatory acts” with the contract with Pfizer? No one knows how long Ursula von der Leyen will be able to hold her line, which has all the abuse of power.

The rest of the report follows suit. Its importance is crucial for understanding the sequence of operations since April 2020. It stabilizes a documented version of the facts which makes it possible to understand the mechanism by which COVID enabled the European Commission to take power under particularly questionable conditions within the Union. 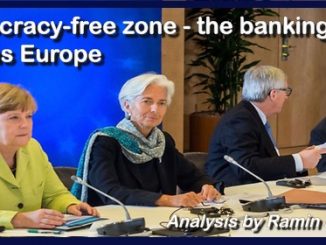 The hopelessly corrupt structure of the Eurozone & the Eurogroup