Is Switzerland About To Create A New Banking System?

The banking system is changing. Perhaps the greatest movement right now is the increased use of modern information technology.

The banking system has been lagging behind much of the rest of the world in terms of moving to use the new technology that is available to them. But, this “catch up” seems to be accelerating and who knows where it will take us.

Also, there is much discussion about how the banking system should be regulated. Commercial banks create money through the lending process. The amount of demand deposits…or time deposits…that exist within the banking system  depends on how aggressively the commercial banks use the monetary base created by the Federal Reserve System to expand their lending activities.

The monetary base is composed of coin and currency outside the commercial banking system and commercial bank reserves, held either at an individual bank, or in the form of deposits the bank holds at the Federal Reserve System.

The basic banking literature shows how a bank can take $10 of the monetary base, and if the reserve requirement behind demand deposits is 10 percent, turn that $10 into $100 of loans.

Other than the reserve requirements behind deposits, commercial banks can be controlled by limiting the leverage ratios a bank can use to “multiply” its equity capital. For example, the regulators can require the banks to use no more than a 20-to-1 leverage ratio. This means that if the value of a banks assets fall by 5 percent or more, the bank would become insolvent.

Right now in the United States, banks are seeing many of the regulations they have to adhere to weakened. As is typical, bank regulations are made more strict following an economic crisis, like the Great Recession, and are then loosened up as an economic recovery proceeds.

With fractional reserve banking, the banking system will, forever, face these swings in the regulatory environment as governments attempt to reduce the impact of the cyclical movements. The IMF has compiled data on banking crises and indicates that there have been 147 individual banking crises occurring between 1970 and 2011.

And, these crises are not insignificant:

“Within just three years from 2007, cumulative output losses, relative to trend, were 31 percent of GDP in the US. In the UK, the recent crisis imposed a fiscal cost only exceeded by the Napoleonic war and the two world wars.”

Now, something else is being suggested. 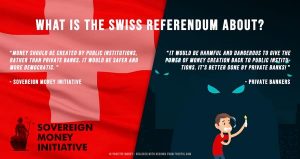 Switzerland is having a referendum on June 10 that includes a proposal called Vollgeld. It is a proposal to change the banking system in a way where banks would no longer have the power to create money. The liquid deposits of a bank would become “state” or “sovereign” money.

This proposal is not unlike earlier efforts to create a “safer” banking system by requiring commercial banks to hold reserves of 100% the amount of demand deposits that were on a bank’s balance sheet. The idea of a 100% system was devised following the Great Depression and is closely linked to the economist Irving Fisher, who published a paper in 1939 titled “100% Money and the Public Debt.” The idea became known as the Chicago Plan.

The change, if the proposal passes (which is unlikely given recent polls), many economists argue would represent a major earthquake to the banking system, the financial system, and economy. Others feel the change is unnecessary, the monetary authorities and the bank regulators just need to be more conservative and not allow commercial banks to push limits as they have in the past.

Modifications have also been suggested. For example, in one such system, citizens of a country would be allowed to hold a “bank” account directly at the central bank.

The argument here is that branch banking, as we now know it, is “perishing” due to the changes that are taking place in information technology.

But, the decline in branch banking is not the only thing that information technology is bringing about.

One of the major things that modern information technology does in every situation is speed up the pace of transactions. And, one could argue that in the case of commercial banks, the speeding up of transactions could be devastating.

Take the case of a run on a bank. In the “good” old days, if depositors came to a banking office to withdraw their money, the bank could just close their doors and slow down the process of deposit redemption.

In the evolving technology, the speed at which things can happen increases almost daily. The imagination can go wild imagining how fast a crisis could get out-of-hand. Concerns over the magnitude of such a crisis is also mindboggling.

But, this is what evolving information technology does. History is full of stories about not only the continual spread of information, but also the speed at which information can spread. All business is becoming based, to a greater extent, upon intellectual property and other intangibles, and pride is taken in the fact that new innovations are brought to market in two or three years rather than the 30 years of more that was the case a century ago.

The speed at which transactions can take place now and in the near future may require the fractional-reserve banking system to change because the major movements of funds cannot be controlled in a reasonable way.

The Chicago Plan, Vollgeld, or some other system may have to take the place of what exists now.

Martin Wolf, in the Financial Times, writes that the Swiss initiative “could provide an illuminating test of a better possible future for what has long been the world’s most perilous industry.”

Whatever, Mr. Wolf states that “At the limit, as some argue, risk-bearing financial intermediation might need to be ended.” This is something to think about.

Poland Wants More Gold: “The ‘Most Reserve’ Of Reserve Currencies”