Stefan Molyneux and Lauren Southern have been touring Australia and New Zealand, giving talks about multiculturalism, immigration, IQ differences between races, white genocide in South Africa, and the war on Western culture. When they were in New Zealand, the owner of the venue, who had warmly welcomed them the day before, canceled the event one hour before it was to begin, and seemed extremely agitated, leading them to believe he had been threatened. When they were interviewed on a New Zealand news program, it was obvious that the interviewer felt that denying them a public platform was justified on the theory that discussing racial differences in IQ would be insulting to the Aboriginals.

To set the record straight, my view is that no topic, no matter how controversial it may be, should be blocked from discussion so long as all parties refrain from ad hominem attacks and are allowed to present their views without interruption. Truth will always win over error when given an equal hearing and does not need coercion to defend it. The right of free speech is the foundation of all other rights, because speech is the expression of thought. Any attempt to squelch speech is an assault on thought itself and, without freedom of thought, man becomes a programmable robot stripped of humanity – which, incidentally, is the goal of collectivist systems.

However, the issue of free thought and speech becomes more complicated when it relates to differences between age groups, nationalities, cultures, genders, races, and followers of religions. The problem is that differences often are subconsciously converted from simple measurements to a scale of human value. Men are larger and stronger, as a whole, than women. Does this make them superior to women? Well, in some ways yes and in most ways no. In general, women have a higher level of intuition and are more perceptive than men, but does that make them better than men? Well, in some ways yes and in most ways no. Some races are taller or are better at physical sports, some cultures have produced more technically or more artistically advanced civilizations, some religions have greater respect for women’s rights, some races score higher on IQ tests. Does this mean that the people who are in these categories are higher on the scale of human value? The answer, of course, is no.

Even IQ (or perhaps we should say especially IQ) has little or no relationship to human value. It may relate to the level of technological, artistic, or political contributions to society, but that is a poor measure of human value when one considers the fact that many of the worst tyrants, killers, and crooks in history had very high IQs. Low IQ may be an invitation to street crime, but it is a barrier to high-level crime in corporations and governments. Aggressive wars, genocide, and public plunder almost always are led by those with above-average IQ.

Unless we want to take the position that human value is determined by how many words in one’s vocabulary, or the degree to which one can solve puzzles, or how many abstractions one can contemplate at the same time, or how many people one can dominate, we must conclude that it is absurd to get into a froth over the fact that there are differences in IQ between individuals and also between races and ethnicities. Of course there are. So what? There are lots of other differences also. Do any of them mean that any one person or category is superior or inferior in terms of human value? Not in my book, it doesn’t. Human value is measured, not by IQ or physical strength, or talents, or physical size, or race, or class. It is measured solely by the degree to which people abide by the Golden Rule and the extent to which they leave the world, and those they encounter, better off than before they arrived.

Are all cultures equal? Are we racists or jingoists if we think that the culture in which we were raised is better than all others? Who are we to say that our culture is the best? Isn’t that divisive and hateful? My answer to this is simple. It may not be a good idea for us to proclaim to the world that OUR culture, the Western culture, is superior to all others, for that is a matter of opinion with which huge segments of the world will disagree. To throw that proclamation at the rest of the world is bound to be taken an insult to those who feel that THEIR cultures are superior. Not a good way to make friends.

However, even though we are wise to avoid shouting to those of other cultures that ours is superior to theirs, that does not mean we have to think that all are equal. There is nothing in the book of international etiquette that says we can’t have a preference for our own culture and a FIERCE desire to preserve it. We had better understand what culture WE want and be prepared to create it and defend it. That means we must understand the value of a state that respesents the will of the people, not a state that is based on lords and masters over the people. We must understand the value of a judicial system with trial by a jury of one’s peers, the value of a religious consensus on the value of human life regardless of gender. We must understand the value of a system that respects private property – and on and on. These are components of the Western culture that are the basis of freedom and human dignity. If we want to live in this culture, we have an obligation to defend all of these components against those who want to replace them with contrary principles from other cultures. We do not have to insist that others adopt our culture. That’s their business entirely, but we had better know what we want for ourselves. Otherwise, we will lose our heritage of freedom.

Note that none of the values I mentioned have anything to do with skin color or geography. All of the seminal elements of Western culture come from ideas and principles and traditions. There may be a genetic component that makes some segments of the population more open (or resistant) to these ideas, but I am not aware of any evidence to that effect that cannot be better explained by the far more powerful impact of, for example, respect for private property which, in turn cultivates development of the work ethic.

If we are to avoid the well laid trap of being drawn into bitter conflict with each other,
let us put aside the temptation to think that, somehow, IQ or race has something to do with human value. But let us also stand firm in defense of the right for anyone to disagree with us and to speak publicly in defense of their views.  – GEG

ER recommends other articles by Need to Know News 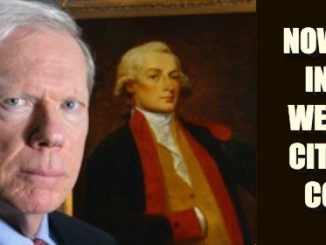 Western Democracy is a Myth

Pornography and Political Control, Not Liberation As We’ve Been Told